Catching up with the NBA fireworks 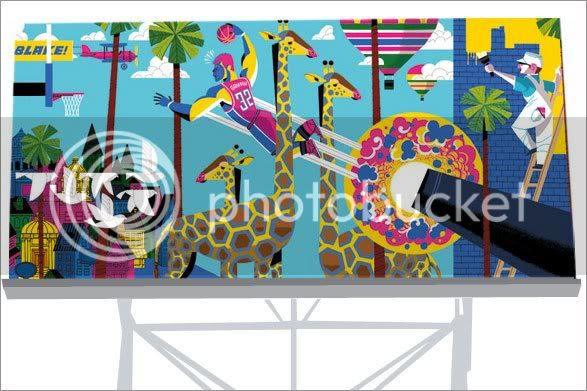 The NBA has certainly had a lively last few weeks. This new billboard by FreeDarko's Jacob Weinstein seems to embody it all pretty well.

The Dunk Contest and All-Star Game were as good as they've been in years. Blake Griffin (the dude on the billboard) put the ultimate exclamation point on everything with a jaw-dropping dunk, jumping over a car with a choir singing "I Believe I Can Fly." Outlandish? Yup. And one of the Dunk Contest's best participants, the gifted Toronto Raptor with the euphonious appellation of DeMar DeRozan, has made a stink about all the extra bells and cannons. He says he's done competing in the Dunk Contest if they continue to bring in so many props and gimmicks (JaVale McGee brought in a second hoop and dunked on both at the same time---cool, yes, but it's a dunk contest not a circus).

It's a shame because DeRozan is one of the more naturally gifted high-flyers in the league as evidenced by this (organic) dunk he did that night. Witness the grace and sheer athleticism in this video. (And I love the look on Darryl Dawkins' face as he watches proudly.)

I missed the entirety of the All-Star Game itself (still didn't have internet or TV hooked up) and have had to settle for highlights but it seems to have had a great ending, with Kobe Bryant kicking ass and taking home the MVP in his home arena.

Not long after all those fireworks, the NBA trade winds came blowing through town like a tornado, picking up pieces and tossing them to and fro. There were about a bajillion trades and you can read a nice analysis of all the deadline deals here and here. 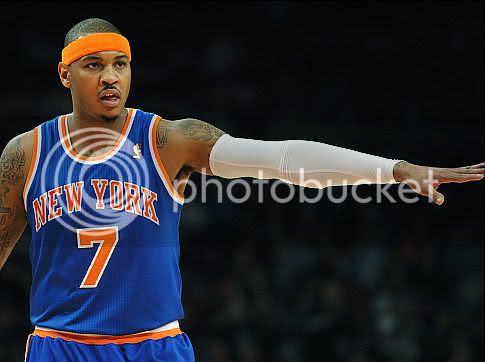 The biggest trades involved my own hometown favorite New York Knicks and New Jersey Nets. After six months of public haggling, the Denver Nuggets and the Knicks agreed on a deal that sent forward Carmelo Anthony, point guard Chauncey Billups (a favorite player of mine), and a few other small pieces to the Knicks in exchange for about 60% of the Knicks' roster as well as a bunch of other assets. The Knicks absolutely gave up a shitload to get Anthony, a great player but one who is definitely a notch below the game's biggest stars because he's a bit one-dimensional.

The former baseball stats genius and now famous election poll analyst Nate Silver actually chimed in on the value that Anthony provides to a team. First, he had an interesting piece about how Carmelo tends to make his teammates better by being such a good shooter (an article that Basketball Prospectus' Kevin Pelton responded to with a numbers-heavy piece of his own) then he wrote a huge article analyzing the State of the Knicks after giving up so much to get just a couple of players. The verdict: the immediate future for the Knicks is good. Not great because they'll have a top-heavy stars-and-scrubs lineup for a while, but good. For all the hoopla, I'm not sure that's a big success. But Pyrrhus would be proud.

I've tried to watch all the Knicks games since the trade and I can say that I'm definitely glad Chauncey Billups was in the deal. I love watching that guy play. Other than that, they look good...not great.

Across the river in New Jersey, the Nets made a pretty daring trade, one-upping their rivals by acquiring a better player in point guard Deron Williams from the Utah Jazz (whose fans are ready to bum rush the front office now). Williams is an all-around superstar and arguably the best point guard in the NBA. The problem for the Nets is that his contract is about to expire and they've got no guarantee that he'll stay with them. If he does, the Nets have themselves a great piece to build around. If not, they're shit outta luck.
Posted by PQ at 5:29 PM