Last Wednesday (a few days before Bloomsday), at the invitation of the Austin Film Society, I attended a screening of the documentary "In Bed with Ulysses" which tells the story of James Joyce writing and publishing Ulysses. While it was refreshing and often entertaining to witness the story of Joyce creating his epic and rising to fame (and notoriety) conveyed through cinema, I found the film lacking in many respects. 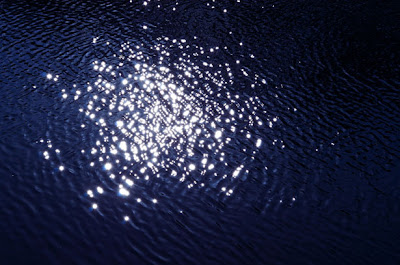 "Our skin shares its chemistry with the maple leaf and moth wing. The currents our bodies regulate share a molecular flow with raw sun. Nerves and flashes of lightning are related events woven into nature at different levels."
- Richard Grossinger, Planet Medicine


"I am part of the sun as my eye is part of me. That I am part of the earth, my feet know perfectly, and my blood is part of the sea. There is nothing of me that is alone and isolate, except my mind, and we shall find that the mind has no existence by itself, but is only the glitter of the sun on the surface of the waters."
- D.H. Lawrence, Apocalypse and the Writings on Revelation

(Taken from Rob Brezsny's excellent book Pronoia is the Antidote for Paranoia.)

Some Brief Thoughts on Ulysses for Bloomsday

"The heaventree of stars hung with humid nightblue fruit." - Ulysses

One of my favorite chapters in Ulysses is known as the "Ithaca" episode, the penultimate chapter of the book, where the prose turns into a scientific Q & A catechism featuring lengthy ruminations by the main character Leopold Bloom on things like water and the cosmos. A particularly beautiful passage has Bloom considering the connection between woman and the moon:


What special affinities appeared to him to exist between the moon and woman?

Her antiquity in preceding and surviving successive tellurian generations: her nocturnal predominance: her satellitic dependence: her luminary reflection: her constancy under all her phases, rising and setting by her appointed times, waxing and waning: the forced invariability of her aspect: her indeterminate response to inaffirmative interrogation: her potency over effluent and refluent waters: her power to enamour, to mortify, to invest with beauty, to render insane, to incite to and aid delinquency: the tranquil inscrutability of her visage: the terribility of her isolated dominant implacable resplendent propinquity: her omens of tempest and of calm: the stimulation of her light, her motion and her presence: the admonition of her craters, her arid seas, her silence: her splendour, when visible: her attraction, when invisible.

Today is Bloomsday, commemorating the day on which James Joyce's most famous novel takes place. It's also Father's Day which is fitting because, perhaps more than anything else, Ulysses is about the meaning of fatherhood and paternity, the "consubstantiality of the Son with the Father."

The book begins with three chapters focusing on Stephen Dedalus, a 22-year-old intellectual and schoolteacher (representing young Joyce himself) who's still mourning the death of his mother who died months prior and has left the home of his family mainly because of their abusive, alcoholic father. Stephen is kind of a mess; while he's certainly brilliant, he's stuck in a self-destructive binge-drinking, homeless, depressed situation.

The rest of the book introduces us to Leopold Bloom, the novel's great comic hero, a 38-year-old father and husband whose relationship with his wife was scarred when their infant son died shortly after his birth 11 years prior. The couple hasn't had sex since then and they sleep head-to-foot in bed. His wife Molly ostensibly cheats on Bloom when he's not around. On this day, June 16th, he's aware of a tryst that is to occur at his home in the afternoon and purposely procrastinates and stays away from home all day to avoid it, finding himself in an array of urban adventures and confrontations. (Notice the opposition to Homer's Odyssey where Odysseus fights to return home to his chaste wife who's been rejecting suitors.)

Throughout the afternoon, the paths of Bloom and Stephen weave and intersect like a caduceus, each appearing in the background of another's scene until the explosive center of the book where the sympathetic Bloom decides to follow a drunken Stephen toward Dublin's brothel district to try to save him from ensuing danger.

In discussing Ulysses, people often describe it as a normal, mundane day in the life of one Jew in Ireland named Leopold Bloom. I strongly disagree with this description. While, yes, Bloom runs some errands and does everyday things like defecate, urinate, masticate, masturbate, he also attends a funeral (which leads to deep consideration of life and death), suffers the sadness of knowing his wife is cheating on him that very afternoon (haunting his mind all day), visits a woman in the hospital who's been suffering through a terribly painful labor (his appearance coinciding with a successful parturition), and saves a precocious but wayward young man from getting his ass kicked or going to jail or both.

It is toward the end of the text, in the Ithaca episode, after Bloom has brought Stephen home to help him recover from his intoxicated misadventures with some hot cocoa and philosophical dialogue, where the two characters become, as Joyce described them, "celestial bodies". Astronomical and scientific jargon-laden prose intricately (yet somehow poetically) describes their experience as they stand out in the backyard urinating underneath the stars.

I'll have more to say about Ulysses and Bloomsday later on. For now, I've got to call my dad and then go host a little Bloomsday gathering at a local coffeeshop.

EDIT: Have to add another favorite passage from Ithaca, from a section of about four pages worth of Bloom (the science enthusiast as opposed to Stephen the poet-artist) ruminating deeply on physics, the cosmos, "the condensation of spiral nebulae into suns," etc. After his thoughts have zoomed out into an increasingly expanded perspective, he then focuses back on the earth and the unfathomable, perhaps bottomless depths of the microcosm:

Were there obverse meditations of involution increasingly less vast?

Of the eons of geological periods recorded in the stratifications of the earth: of the myriad minute entomological organic existences concealed in cavities of the earth, beneath removable stones, in hives and mounds, of microbes, germs, bacteria, bacilli, spermatozoa: of the incalculable trillions of billions of millions of imperceptible molecules contained by cohesion of molecular affinity in a single pinhead: of the universe of human serum constellated with red and white bodies, themselves universes of void space constellated with other bodies, each, in continuity, its universe of divisible component bodies of which each was again divisible in divisions of redivisible component bodies, dividends and divisors ever diminishing without actual division till, if the progress were carried far enough, nought nowhere was never reached.

Reviewing a handful of records from the first five months of 2013 that have occupied my ears... 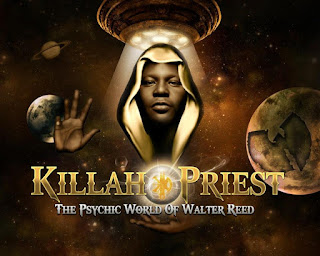 As I'm in the midst of hammering out a piece covering a few of my favorite hip hop albums of the year thus far, here is one of the finest tracks from the album I'm most enamored with, Killah Priest's vast mystical galaxy of lyrics entitled The Psychic World of Walter Reed.

This track represents the album as a whole as it features the oft-repeated imagery of traveling into the cosmic depths of inner space and becoming in tune with ancient spirits while composing his poetry.

"Then I recline so I can see the design
before he said close your eyes cuz what we need is your mind
and the rhyme, like a storm as the currents blew me on
thru gases, I saw places where planets were born
and the voice that spoke to my ghost majestic
let's show you the essence, let's reveal to you the presence"


"With rare paint, beads, water or oil
saint, holy man, beggar or royal
angels, devils, or aliens
which do you believe in more?
do you receive or restore?
do you want peace or war?
do you wish to live free or by law?
it gets deep to the core
we perform prayers, fasting, and charities, go on pilgrimage
but do we know what real healing is?"