Joe Maddon's squad ended last year with the run differential of a 95-win team but underachieved to the tune of 90 wins, just short of the playoffs. Despite trading away a key contributor in James Shields and losing B.J. Upton, this team actually might have improved. New shortstop Yunel Escobar upgrades what's long been a key weakness, while newly acquired outfielder Wil Myers is projected to be an elite all-around slugger whenever the team decides to let him play in the pros (certainly this year at some point).

The pitching staff lost a big-time innings-eater but the organization already had an overflowing supply of young starters to work with, hence the need for a trade. Even without Shields, their rotation runs 7 or 8 deep right now. This team can pitch. It's the lineup that could potentially be a problem. Evan Longoria tends to miss too many games, Myers is currently being kept in the minor leagues for money reasons, Toronto's discarded keystone combo (Escobar and Kelly Johnson) could easily falter, they're getting no offensive value from the catcher and first base spots, and newly-minted centerfielder Desmond Jennings is still unproven. Even with so many question marks, this should still be the best offense the Rays have had in a few years. With Longoria playing at full strength, I think they'll edge out Toronto for the division and be a good bet for the World Series.


Continuing our quick rundown of each division...

They spent most of last season figuring things out, not solidifying first place until late September despite being the odds-on favorites to run away with the division. Once they settled in (and patched a major hole at second base), they were dominant on their way to the AL pennant.

With free agent Torii Hunter and a recovered Victor Martinez joining the star trio of Miguel Cabrera, Prince Fielder and Austin Jackson, this is a much deeper lineup than they've had in recent years. Despite the Triple Crown performance by Cabrera, the team only put up 726 runs last year, their lowest total since 2005. They should easily exceed 800 runs this year.

The rotation is loaded, led by last year's top 2 strikeout pitchers in the American League with three above-average starters behind them. This could easily be the best starting staff in the AL. The bullpen situation is unsettled but there are enough good arms (Coke, Dotel, Albuerquerque, Benoit) to get by. They should run away with the division from the start this time and compete again for the AL championship. 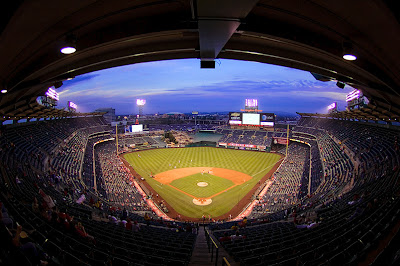 And another new season begins.

This will be the fourth time in this blog's history that I'll be writing up a division-by-division baseball preview. Each time in the past I've gotten at least a couple predictions dead wrong. Last year, for instance, I had the Nationals finishing in last place and the revamped Marlins winning the NL East. Instead, the Nats won 98 games and the division while the Marlins imploded with a 69-win last-place disaster season.

All of which is to say: don't take this too seriously. No matter how well you know baseball, it's impossible to predict the outcome of a six-month-long season with any sort of accuracy. This format is merely the most convenient for discussing each team's chances. I like to yap about baseball and looking at each team's projected record represents a good starting point.

On the Lofty Potential of the Human Brain


Soaking in certain books and lecture materials (mainly revolving around the works of Robert Anton Wilson and Timothy Leary) over the last few weeks has had me often floating in a deep, blissful and prolonged appreciation and consideration of the human brain, nature's astounding biocomputer.

Cassiopeia and Tycho's Star in Ulysses

One of the websites I visit regularly is NASA's Astronomy Picture of the Day page. Last week this magnificent image of the so-called Heart Nebula appeared:

It was noted that the Heart Nebula appears in the constellation Cassiopeia, a name which immediately rung a bell as it recurs in the thought streams of the two main characters in Ulysses: "delta of Cassiopeia." While that phrase has occasionally echoed in the back of my mind the last few years, I never took the liberty to find out what exactly it means and why it pops up a few times in Ulysses. I frequently find that, when dealing with the art of James Joyce, there's always a reason for the recurrent phrases. They always mean something if not multiple things. Every microcosmic grain, when closely examined, tends to open up a new world.

NHL 2013: The Truncated Season at its Midpoint

It's about that time for me to compose some thoughts on the current NHL season and its combatants. My hockey fanhood seems to peak each year right around the midpoint of the schedule, slowly trailing off into the spring as baseball begins and the combo of stretch-run NBA, NHL, and a fresh baseball season becomes too much for me to keep up with all at once.

For now, I'm intensely following the lockout-shortened 2013 NHL season and greatly enjoying it. The condensed 48-game schedule has teams only playing opponents from the same conference and lots of games going on virtually every single night. This feels like the way it should always be. Both the NHL and NBA (and MLB, for that matter) badly need to shorten their regular season schedules but with massive amounts of TV revenue flowing in, that's just not going to happen.

Since we're dealing with a relatively small sampling of games (just a handful of teams have reached the 24-game halfway mark at this point), I'll try to keep this short.

An Eclectic Array of Bullet Points

My writing has begun to fall off the rails a bit the last few weeks as I've been drawn in many different directions by a combination of life events (all good ones!) and overindulgent devouring of my favorite types of brain food. The latter is always the source material for my writing but instead of taking the time and focused energy to express my thoughts about these things I've been just been consuming it all. In an attempt to start bringing balance to this gluttony, here are some words on the extremely varied things I've been spending so much time gobbling up the last few months.