Book Review: Thomas Pynchon's Against the Day is Lit! 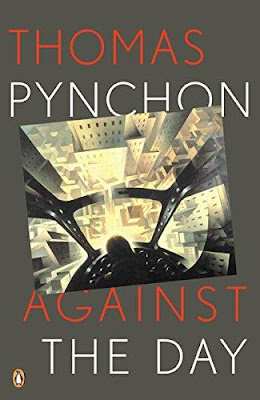 Last summer, topping off a binge of reading Thomas Pynchon books, I set forth on the long, arduous, and vastly entertaining excursion of reading his 1,085-page epic, Against the Day. Almost a year later, I'm still preoccupied with this multifaceted meganovel. Before putting the cinematic cinderblock of letters back on the shelf for a while I've got some thoughts I'd like to share on it here.

Mainly, I must declare that Against the Day is Lit!!! As in, Against the Day is Literature in extremis! Literary, narrative worlds taken to extreme levels of world building, as Bruce Allen of Kirkus Reviews captured it, "Pynchon is both wordsmith and world-smith." The book is all about journeys traversed around the world, and it is told in a bountifully rich style of extremely erudite yet comedically committed prose that serves to weave a vast interconnecting network of literally hundreds of characters across the span of a few decades surrounding the turn of the 20th century.

It's also Lit as in Bonkers as in yo this book is lit af. (Millenial slang for "yo it's wild as fuck!") In Against the Day, Pynchon takes risks, letting the imagination expand in full flourish of zany, unpredictable explosive interactions and storylines, straining the limits of credulity as he works within the genre of what Wikipedia calls historiographic metafiction or metahistorical romance. The powerful electrical experiments of Dr. Nikola Tesla himself make up part of the story, mixed with the ominous tensions of turn-of-the-century political revolutions and the buildup to World War I, witnessed by a team of globe-trotting, time-traveling aviator adventurers (the Chums of Chance), with the overall storyline centered around a decades long struggle between the family of a murdered anarchist bomber (Webb Traverse) against a merciless robber baron/cartel boss (Scarsdale Vibe). It is the grandest manifestation of Pynchon's consistent theme of the struggle throughout history between what he labels the elect vs the preterite or the rich and powerful vs the common man. Serious, important historical stuff. But as Steven Moore noted in his review, the book's Marxist melodrama is laced with the comedic strain of Groucho Marx. Since this is Pynchon in full force, the novel is completely bonkers, often hilarious or silly, and sometimes ridiculous in its sexual excesses.

For example, flipping open the book at random, on page 384 we encounter a freedom fighter in the Mexican Civil War named El Ñato described as an "energetic presence" dressed in an "officer's jacket from the defunct army of some country not too nearby" with a ridiculously oversized parrot perched on his shoulder, "so out of scale in fact that to converse with its owner it had to lean down to scream into his ear." Then we meet the parrot:


"And this is Joaquin," El Ñato smiling up at the bird. "Tell them something about yourself, m'hijo."
"I like to fuck the gringo pussy," confided the parrot.

Later on when one of the main characters is about to strangle the insolent parrot, Pynchon describes El Ñato "sensing psitticide in the air." Parrots being of the Latin order Psittaciformes, Pynchon invents a clever word for parrot murder.

And finally, the novel is also Lit in the sense of Illumination. One of the main preoccupations of Against the Day is Light. The novel is full of newly lit cities, luminous prose, an ever expanding glow of creativity and proliferant storylines intent on covering everything under the sun. The force of the Tunguska event plops upon the text with "A heavenwide blast of light" (p. 779) that leaves the sky over the European continent alight for weeks. The light-refracting crystal Iceland Spar is a recurrent element in Against the Day. We experience frequent digressions into philosophical, scientific or occult contemplations of Light itself, as in the scene where the young genius mathematician/engineer Kit Traverse argues with his cynical brother Reef on science vs mysticism, pointing out how wireless waves were complete "bunk" not very long ago, then he reminds us: "Seems every day somebody's discovering another new piece of the spectrum, out there beyond visible light, or a new extension of the mind beyond conscious thought, and maybe someplace far away the two domains are even connected up." (p. 670)

To illustrate the ways in which Against the Day is totally lit, let's further expand on each aspect of its lit-ness: