As Game One begins in less than an hour and I've got pizza to pick up and a friend's house to travel to, I'll try to keep this brief. Plus I already said enough about both participants in my LCS previews (which turned out to be spot on, go read 'em).

Despite the San Francisco Giants having home field advantage in the World Series, the betting lines show the Detroit Tigers as heavy favorites to win their first championship since 1984. That seems entirely logical considering the way the Tigers plowed over the best team in the American League, the Yankees, in a sweep of the ALCS. The Detroit pitching staff is headlined by the best thrower of baseballs on the planet, Justin Verlander, and if the Giants have any chance of winning they'll probably have to beat him at least once. Behind Verlander, every other starter in the Tigers' rotation is formidable, this depth being the key reason behind their takedown of the Yanks.

The problem for Detroit is their horrendous defense. Their starting pitching is so great, registering so many strikeouts that the defense tends to not matter all that much. The ball is so rarely put into play. This was especially true against the A's and Yankees in the postseason, two teams that strike out a ton and rely on home runs to score.

The Giants, on the other hand, hit the fewest homers in baseball this year. And yet they were one of the best offensive teams in the sport. This is because they succeed by putting the ball in play, smacking doubles and triples all over the field while rarely striking out. Look for this attribute of the San Francisco offensive attack to be a major factor in this series. The Tigers can't catch the ball (aside from Austin Jackson in center) and the Giants don't strike out that much.

The Giants also boast a much stronger bullpen than the Tigers and this will surely come into play as the San Francisco starting rotation appears to be a weak spot going into the series. They'll have their worst starter, Barry Zito, on the mound in Game 1 to face Verlander and it looks like their best pitcher, Matt Cain, will only pitch in one game (Game 4). The Tigers will surely put some runs on the board and so you can count on the Giants bullpen having to get involved early in some of these games.

While Detroit's vaunted rotation will be a major threat, I expect the Giants to have little trouble scoring runs, particularly at home. When the series shifts to Detroit, the Tigers will have a big advantage as they're built to carry a DH, while the Giants will have to put some inadequate hitter (Aubrey Huff or Hector Sanchez) in that spot. I expect Verlander to steal the show for Detroit at least once in the Series, but I still pick the Giants to overcome Detroit in six games.

The National League Championship Series matches up the last two World Series winners, both of whom were surprise winners at the time. In 2010, the Giants managed to get past the loaded Philadelphia Phillies and went on to knock off a superior Texas Rangers team for the World Series. The Cards also upset the Phillies on their path to the championship, where they too upended the Rangers last year.

Now the two will duke it out for another NL pennant. It's a very tight matchup, closer than I expected before looking at the numbers. The Cardinals are clearly a very deep offensive team, even having lost Albert Pujols they actually scored a few more runs this year (765) than last (762). Carlos Beltran bats 2nd in their lineup and currently has the best career postseason numbers (.375/.488/.817 AVG/OBP/SLG) of any player in history, Babe Ruth et al included. With their middle infielders Daniel Descalso and Pete Kozma showing plenty of offensive ability in toppling the Washington Nationals, there really isn't a weak spot in the whole lineup from top to bottom.

Well, that was fun.

The first round of baseball's playoffs provided just about the maximum possible amount of excitement with all four series requiring the full five games to be decided. All four series also featured at least one memorable game, while the San Francisco Giants managed to become the first team in the history of the sport to come back from a 2-0 series deficit by winning three straight games on the road.

There was a surprising amount of symmetry to the whole thing. In the American League, powerhouse favorites Detroit and New York saw surprise Cinderella teams (the Oakland A's and Baltimore O's) fight back to stave off elimination until respective aces Justin Verlander and C.C. Sabathia laid the underdogs to rest with dominant Game 5s. In the National League, the Giants completed an epic comeback by outlasting their opponent in a tense deciding game while the Cardinals had perhaps the greatest single-game comeback in postseason elimination game history---they trailed 6-0 (on the road!) and never stopped battling through each at-bat until they eventually broke through to first tie the game and then take a two-run lead, doing so in successive 9th inning at-bats while down to their final out.

Now we're left with an intriguing quartet of experienced postseason squads battling it out for a shot at the World Series. The Cardinals and Giants are our last two World Champions, while the Tigers and Yankees are about to begin their third head-to-head playoff matchup of the last 7 years. Here I'll give my quick rundown of the AL series (which begins tonight) and then later we'll take a look at the NL.

This is Where We Live

Hard to believe this is even a real photo (click to enlarge).

From NASA's essential Astronomy Picture of the Day page.

"There Are Some Lost": A Reflection

There's an old saying that death comes in threes. The news of three deaths each successively rippled through my aura this past week, leaving me in contemplation and occasional empathetic mourning. Thankfully, the deceased were not people who were close to me but all three were shocking nonetheless.

With this on my mind, I'd like to share something I had intended to write back in August as a dedication to a close friend of mine who abruptly passed away three years ago at the age of 26. He was initially the only friend who made an effort to stay in touch after I moved out of New York four years ago and, thankfully, I got to see him one last time two weeks before he died.

"There Are Some Lost" is a short, lyrically poignant elegiac rap song by Kevlaar 7 that was released earlier this year. It eulogizes his cousin who was murdered at the age of 20 and, with poetic deftness, manages to encapsulate the experience of losing someone.

I'd like to shed light on the song's two verses, reflect on some of the images, and attempt to unravel the meanings contained in his condensed lines.

All of the colors are changing
Autumn is here
Leaves now are falling
Dark's near....


It's the first cool, crisp day of Fall here in Austin. Autumn has finally arrived in this beautiful city.

Exactly two years ago, my former girlfriend and I embarked on a 12-hour journey up the coast of California to attend the World Vegetarian Festival in San Francisco. It coincided with the final two days of an exciting baseball season, with San Fran as its epicenter. That crisp, chilly weekend was one of the more memorable experiences I've had in the last four or five years (documented here). Today in Austin, World Vegetarian Day will be celebrated at a massive outdoor potluck picnic party in Pease Park which I'm attending.

After that I'll be hanging out with a diehard San Francisco Giants fan to watch their postseason begin. Two years ago, shortly after we returned from that unforgettable Bay Area trip, the Giants won the World Series.

Baseball has reached its final stages. Football has begun.

The air is crisp, the shadows long. 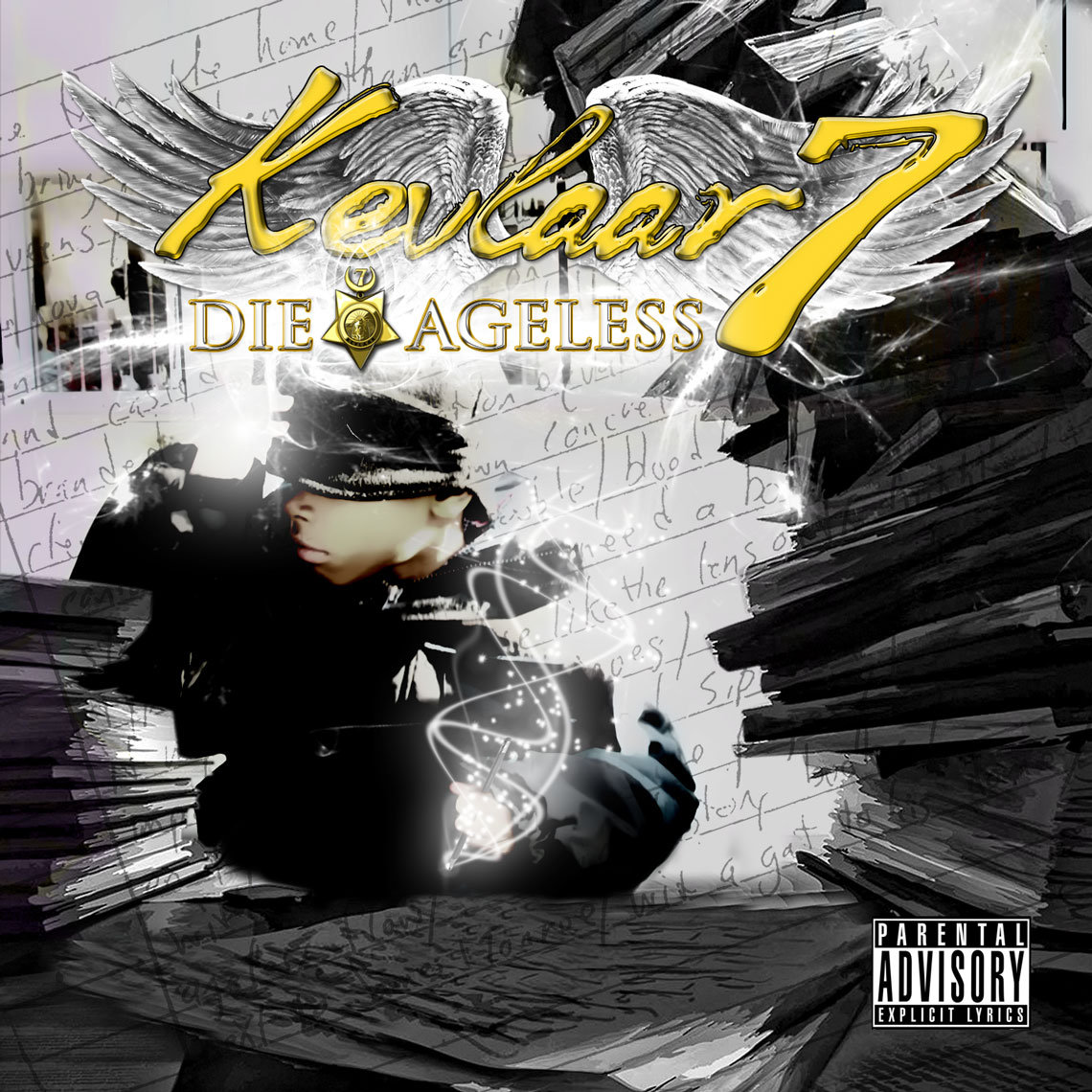 For a brief decade or so, as you may remember, CD singles were a thing. You'd go to the store and buy a compact disc that contained at most 2 or 3 songs, sometimes instrumental and acapella versions included. A good enough single with substance to it might make that lone compact disc worth innumerable hours of spinning. The hip hop genre's ultimate height, the 1990s, coincided with the plateau of compact discs. As more and more music was enabled to be stored and condensed into less and less space, the overall quality of the artform rapidly diminished to the point of catering toward 99-cent ringtone simplicity. In similar fashion, the medium of printed books began as a means of storing and increasing our knowledge only to eventually have bookstores fill up with vacuous bestsellers.

In his first full-length offering, Die Ageless, Detroit emcee/producer Kevlaar 7 has assembled a vastly rich musical novel of 19 chapters (18 songs plus thoughtful intro). One could isolate any one or two tracks, carry them around like an old single compact disc and continually uncover an astoundingly intricate artistic nuance throughout. It's a collection of true hip hop singles, every track feels deeply considered, you really could split this album up into 3 short EPs that would all have replay value.