This video was the first thing I came across when testing the internet connection in my new apartment this past Saturday afternoon.

The lights are an effect of Earth's magnetic field (acting like a shield) protecting against solar winds. There have been a bunch of massive solar storms bombarding our planet recently and this video displays the resultant auroral lights seen from the coast of Australia on January 16th and 22nd.

Our planet's magnetic field comes from its constantly churning iron core, extending out from the center into a large invisible magnetic skin. I've always thought it quite closely resembles the shape of an apple.

This shape resonates in my mind with a painting by Vladimir Kush that I've been thinking about a lot lately, depicting the close connection between an apple's shape and that of a butterfly.

Getting Familiar with the NHL at Midseason

During my recent trip back home to New York I refreshed my perspective on a number of things, most prominently New York City itself (as I detailed in a post around that time). Alongside my renewed appreciation for New York was a brand new appreciation for hockey and the current NHL season. Having spent more than half my life as a hockey player, I've always loved the game and followed the pro hockey season closely. But after a knee injury sidelined me in the summer of 2010 I've been unable to sit and watch hockey games, embittered that I can't play. As a result, I've been almost completely ignorant of what's gone on in the sport, the exception being the Stanley Cup Finals of last June which I watched from within an enormous sports bar in Pasadena, CA while having dinner with a bunch of folks from the James Joyce Conference I was attending (the main buddy I made there was a big hockey fan from Calgary, a professor at the University of Alberta).

Most if not all of my close friends from New York are connected with hockey, we grew up skating on the same teams and continued to be play the game into our 20s. They all remain devoted hockey fans and with the local New York Rangers having their best season in almost 15 years, the hockey buzz was humming palpably during my visit to the city. When my family picked me up at Newark Airport and drove me into Manhattan where I met a friend for dinner, the sounds of the Rangers battling the Philadelphia Flyers blared over the car radio. Later that night, I happened to walk past a crowded post-game Madison Square Garden and some surrounding pubs where blueshirt-clad fans smoked cigarettes out on the sidewalks in the icy winter night.

The next night was Christmas Eve. After dinner I stepped outside to briefly speak to an old friend/nextdoor neighbor out in the street, the gist of our conversation being that I needed to watch the ongoing HBO series 24/7: Road to the NHL Winter Classic as soon as humanly possible. Thanks to the wonderful human advancement that is on-demand television (and my dad's near-obsession with having adequate cable television in nearly every room in my parents' house), I got to stay up late that night watching the first two episodes of the highly-regarded HBO documentary. The show follows the Rangers and Flyers behind the scenes and through their season as they prepare to collide in an outdoor game, the NHL's recently concocted New Year's Day celebratory match which is played on an outdoor surface. With all of the Manhattan scenes featured in the show, my newly minted perspective on the city was augmented and getting to know the personalities of players, seeing the dynamics of an NHL team, and witnessing the brilliance of Philly's cosmic-minded goalie Ilya Bryzgalov officially re-lit the spark on my hockey interest.

Two weeks later, that interest has exploded and so I'd like to let that all vent here and share my thoughts on the current NHL season, which has just recently crossed its midpoint.

"Many a house of life
Hath held me---seeking him who wrought
These prisons of the senses, sorrow-frought:
Sore was my ceaseless strife!"
- The Buddha

"My counsel is that we hold fast ever to the heavenly way
and follow after justice and virtue always, considering that the soul is immortal
and able to endure every sort of good and every sort of evil."
- Plato


It has taken numerous revolutions of this disc over a period of years for me to come upon a full understanding of its message. The display of poeticism (a style best described as "eloquent ferocity" or "ferocious eloquence") and the unconventionally unbroken, smooth (often drumless) hymnal music of the beats easily induces a state of tranquil marvel rather than rigorous contemplation. Now that I've managed to experience the latter and fully assess what's being said and presented on this record, I'd like to shed light on an underground gem of condensed mental minerals. 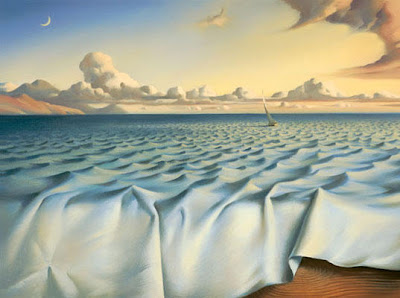 Where We're At (The Center of the Universe)

During the year that has just concluded, a good deal of my mental energy was devoted to Salvador Dali and his paranoiac-critical method. The paranoiac method was one of the keys to my study of Dali and James Joyce. For Dali, one of his favorite means of sharing this theory was always his deep infatuation with Millet's famous painting The Angelus (this was discussed in more detail here). During the 1930s, Dali penned a book-length analysis of this seemingly simple painting, asserting that the two farmers, who appear to be observing the daily Angelus prayer devotions in their field, are actually kneeling over a tiny casket. Millet decided to paint over the casket, Dali declared, because it came across as too morbid.