Know Something of His Work

Most people who have heard of Marshall McLuhan remember him only from this appearance in the Woody Allen film Annie Hall:

"You know nothing of my work," an aged McLuhan says. That's where the title for Douglas Coupland's new biography, Marshall McLuhan: You Know Nothing of My Work!, comes from. I finished it the other day and it's a great read, as a matter of fact, I can't remember the last time I got through an entire book as fast as this one. It's a nice introduction to McLuhan's work and theories but it was such a good book mainly because it is a concisely written and engaging story of the man's life. The author, a Canadian himself, does a great job painting the scenes of McLuhan's upbringing in the vast empty prairies of early-20th Century Manitoba. These Canadian prairie lands come to be sort of symbolic for the vast imaginary open spaces that, as McLuhan keenly sensed, were about to be rushed over by a flood of media and electronics that would shorten the spaces between mankind until we all existed in one universally connected little "global village." 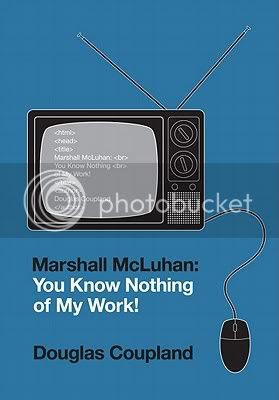 Another aspect of the story I enjoyed was the prominence of "elocution"---the art of effective public speaking using control of voice and gesture---in McLuhan's upbringing. Young Marshall's mother used to go on long tours all around the United States teaching elocution classes and she trained Marshall to memorize long passages in books and be able to recite them powerfully. This was an important part of McLuhan's growth and success as he was an absolute master of debate and, later on, a captivating though confusingly opaque teacher and speaker.

As a college student, McLuhan became infatuated with the works of James Joyce, T.S. Eliot, Ezra Pound and other modern writers while at the same time building up an unbelievable wealth of knowledge on history and literature, in general. The man clearly had a massive perspective on humanity's position in time and, while he was personally not happy or comfortable with the results of the rapid changes he perceived, he certainly never preached to anyone about how they should live or what they should do. He simply analyzed the shit out of everything and explained it all in such a spectacular manner that, as I'm coming to realize, he is truly a wizard whose work can be a guide to maintaining sanity in this media maelstrom we live in nowadays. (And, sure enough, Wired magazine considered him their patron saint.)

It is nothing short of stunning to read how far ahead of his time McLuhan was and to read some of the excerpts in which he completely describes what would become the internet...back in the 60s. At a time when TV's ubiquity was only just beginning, he knew where it was all headed (he even explicitly talks about future elaborate commercials in which the product being sold is barely mentioned or focused on at all---thus the "medium" is truly "the message") and his discussions on the so-called "discarnate man" are perfect for where we're at today; we can travel or appear, like a spirit, essentially anyplace on the globe whenever we want. It's freaky. Yet it's normal for us and we don't even consider how amazing it is.

What I also found to be so fascinating in the character of Mr. McLuhan was that he was a devout Catholic for most of his life and, in many ways, a kind of grumpy old curmudgeon and yet he was a hero to the hippie culture of the 60s and his books, theories, and manner of discussing these things were so thoroughly radical.

Besides the story of the man and his work, the book itself was interesting in and of itself---it's unlike any book, especially any biography, I've ever read. It is essentially written in the form of an informative internet-surfing session. The book tends to vary in styles and there are interruptions for things like the Amazon.com page for some of McLuhan's books complete with customer reviews (both good and bad) plus Google Maps directions, YouTube links and many other reminders of how rapidly the world has changed and McLuhan's foretellings have manifested. A funny example is the opening page of the book which has Marshall McLuhan's name according to a bunch of common internet name generators like a Porn Star name, Pimp name, Ho name, Pirate name, wrestler name, Goth name ("Fragrant Desiccated Corpse"), and more.

The author really wrote a terrific story in an entertaining and clear manner, even throwing in a few footnotes with funny or interesting personal anecdotes---refreshing for me after the Bill Simmons footnote shit-fest I recently slogged through. I don't want to ruin the ending but it's such a surprisingly perfect weaving of modern computer-age mush, poignant reflections, and personal experience. My brother John would often tell me how the aforementioned Simmons book is "a perfect bathroom book", mainly because of its encyclopedic length allowing for random readings. When it comes to reading a book cover to cover, Coupland's biography is a perfect bathroom book---short, concise sections written in an entertaining and informative manner and its hardcover stature is relatively tiny, conducive to holding it with one hand and reading endlessly. Easy-to-digest thought-for-food.
Posted by PQ at 9:53 PM