Parallax, Cosmic Dimensions and Their Measurements

Via Brain Pickings here is an exceptionally awesome little video explaining graphically how we, as humans on the surface of a relatively minuscule celestial body in a practically infinite cosmic ocean, are able to accurately observe the stars and judge their distances.

It's worth watching more than once. You'll likely be too bedazzled by the scope of it all on first viewing, but the explanations undoubtedly become more digestible with each viewing. 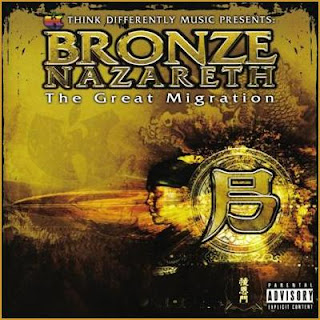 Six years ago today, Bronze Nazareth, at that time a relatively unknown Wu-Tang affiliate, officially released his debut solo album The Great Migration. Most listeners, myself included, had immediately sought the record based on Bronze's already solid reputation as a producer of enticingly melodic and powerful beats. We weren't yet aware of his gift for poetic lyrics.

The all-around artistic brilliance of the album not only cemented Bronze's position as a new up-and-coming musician of great talent, it played a major role in my life at the time and became one of my favorite albums ever.

To be a writer

As has so often been the case since I left the nest of New York and jumped out into the abyss four years ago, I find myself going through transitions.