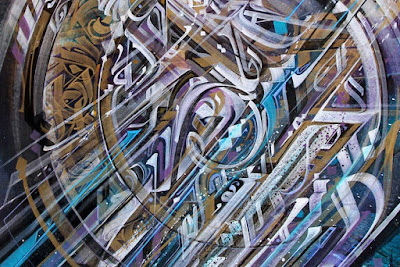 Staring at this piece, "Know You" by Vincent Abadie Hafez, gives me immense pleasure.

I've just recently discovered Hafez' work and am absolutely captivated by it. The textures and patterns remind me of a futuristic, psychedelic Book of Kells. Or the alphabetic equivalent of a nebula cloud of millions of stars being born. A roiling incubator of letters. 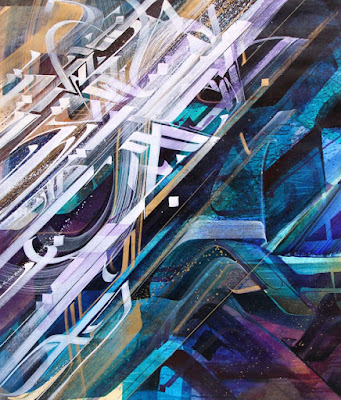 I've had a burgeoning interest in street art and graffiti since meeting my street art-loving girlfriend a couple years ago but this calligraffiti type style, perhaps more than any other street art I've seen, gives me immense gratification.

I could stare at these pieces all day.


Something so fractal about them. 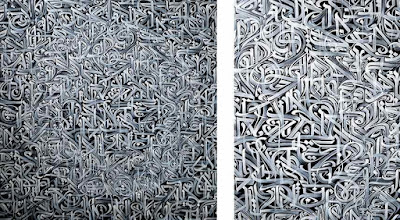 Certainly very Matrix-like, but also suggestive of language, alphabets as living organisms attempting to blend together into sentient creatures. 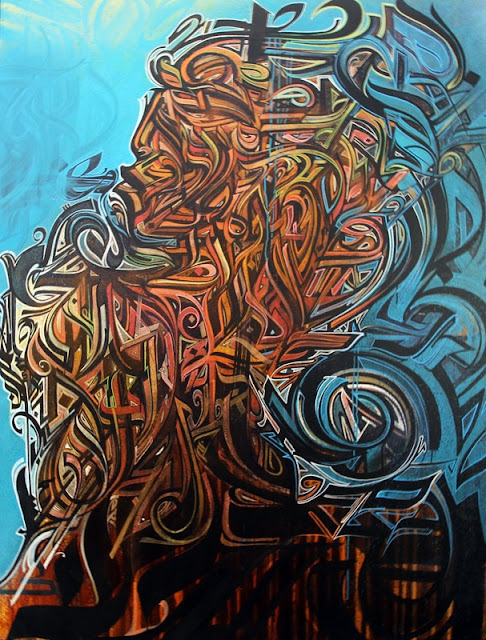 Looking back on 2015, it was a pivotal year in my life. I moved on from a job where I was unhappy to a new job where I'm happier than ever. My first car finally fell apart after 12 years of lugging me and my crap around from one part of the country to another leading to my acquiring a brand new car. I turned 30 years old, officially bringing an end to the promise of my 20s. I closely followed and rooted for the New York Mets on a thrilling ride to their first pennant in 15 years. Wrote a few pieces I think are pretty solid. Started writing my first book, finished the first part of it. And, most significantly, I participated in and completed an enjoyable, challenging, collaborative creative project whose finished product I'm very proud of.

Here's a quick rundown of some of the significant things I wrote, read, watched, or listened to in 2015.

Some Things I Wrote in 2015 on Literature/History:


The Allure of Gravity's Rainbow and Its Mysterious Author
A consideration of author Thomas Pynchon and his most famous novel, the intrigue of which enthralled me throughout the winter of 2014-2015. This piece was one half of a collaborative project with fellow blogger The OG from The Overweening Generalist focusing on the topic of Pynchon and Gravity's Rainbow. Part "Guide to Pynchon" part examination of Timothy Leary's love for the 20th century author's most famous novel, this was my favorite piece to write this year and the one I'm most proud of. 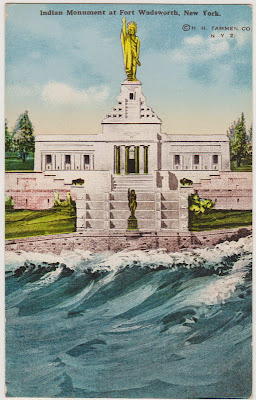 My trip back to the homeland of Staten Island, NY during the 2014 holidays inspired this discussion of a few hidden gems in SI's history. Chief among these:


In the early decades of the 20th century, there were plans to commemorate the island's rich history and recognize America's original inhabitants with a giant national monument featuring a Native American giving the peace sign, overlooking the entrance into New York Harbor. This monument was to rival the Statue of Liberty. The National Native American Memorial would have been the Colossus of Staten Island, greeting ships as they enter into New York from the Atlantic. Except it never happened.

For Bloomsday 2015
I finally got to write something about the sole extant recording of James Joyce reading from Ulysses in this short piece. More importantly, I actually got up in front of people and delivered an introductory talk on the book and did some readings from Ulysses for a pretty well attended and fun Bloomsday event at Malvern Books here in Austin last June.

FinWake ATX visits the Ransom Center
The Finnegans Wake Reading Group of Austin that I organize had the special privilege to visit the treasure trove archives of the Harry Ransom Center this past summer for an exclusive showing of some of their most prized Joyce-related objects. It was an exciting educational experience. I wrote about some of the items we saw here.

Anastomosis
A brief meditation on the fascinating word "anastomosis," its many meanings and applications and its central importance in the message of Finnegans Wake.


"dotter of his eyes": The Mystery of Lucia Joyce and Finnegans Wake
Examining the controversial history of Joyce's daughter Lucia and her purported influence and involvement in the creation of Finnegans Wake.

What is Finnegans Wake? A Simulacrum of the Globe (Part 1)
Taking a glimpse at the vision presented, quite convincingly, by one Joyce scholar who argues that Joyce constructed Finnegans Wake to mimic the form of our globe. This idea includes a new insight into the placement of the dozens and dozens of world languages included in the text. (Also: wait til you read Part 2, coming soon...)

Also worth mentioning here: Back in March I officially began composing what will be my first book, a monograph about Salvador Dali and James Joyce. The first part (there are three parts planned) was completed about a month ago and I'm excited with how it came out. My goal is to finish off the rest of it in 2016.

I'll be lucky to ever accomplish anything remotely close to this scale again. As part of the bold experimental project to create a musical audiobook adaptation of Finnegans Wake, a group effort of people from around the world arranged by Derek Pyle called Waywords and Meansigns, I collaborated with two friends to record the 15th chapter, "reading alawd, with two ecolites" (FW 490), which amounted to a three-hour audiobook chapter with a wide array of music and effects mixed into the background. This project took three months to complete and was an extremely challenging yet thrilling enterprise, unlike anything I've ever done before or may ever do again. I've always hated the sound of my own voice, yet I find this shockingly fun and absorbing to listen to. The final product is extremely well done, a true audio experience, and I owe an immense debt of gratitude to my brilliant trio of co-creators Jake Reading, Evan James, and Melba Martinez for their efforts.

-You can hear the project by listening to Track 15 HERE.
-Read my story on the experience of creating this recording here.
-Check out an interview I did (along with the great Dutch psychonaut Steve Fly Pratt) discussing the project for RAWillumination.net. Here's a snippet:


PQ: The recording process (which took almost 3 months) confirmed a few things I'd experienced when I read the book a few years ago. For one, immersion in the text brings about a proliferation of synchronicities. It's as if the text responds to the environment. All of our names popped up in some form (there was a whole page of PQs), the text occasionally echoed something we'd talked about that night, and when we tested certain songs alongside the reading there were often extraordinary harmonies and resonances in timing and tone. The experience certainly confirmed the text's inherent musical rhythms, it really comes to life when read aloud. And last but not least, it's often said Finnegans Wake is a book for the ear but it's also a book for the mouth. You'll never utter anything like it.

(On the synchronicity tip as well: the uncanny combo of surnames in its trio of creators, "Quadrino Reading James.")