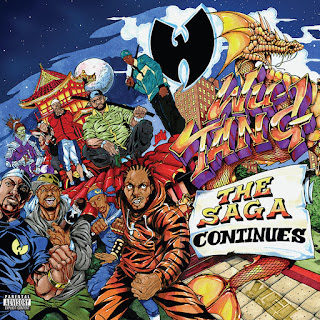 The sheen on the iron "W" was scuffed following Wu-Tang Clan's disappointing 2014 album A Better Tomorrow and the whole distasteful debacle of the Once Upon a Time in Shaolin project. Maybe any press is good press, but while Wu-Tang remains generally beloved and un-fucked-with, the PR hit resulting from the one-two punch of teasing fans with a new Wu-Tang Forever-sounding album assembled by one of the team's freshest new beat-makers sold as one single secret copy to one of the most hated men in the world while instead serving to the public a fractured and subpar group project produced by a rusty and out-of-touch RZA, definitively marked a low point in the Wu-Tang legacy. Maybe the lowest point.

Not to be kept down for long, the Wu phoenix has re-arisen again. The whole Wu-Tang conglomerate has regrouped and brought forth a swarm in 2017, releasing a slew of new projects that serve to reassert their present skills and still-fearsome roster depth while burnishing the legacy of the brand. No bullshit, no gimmicks, just dope beats and dope rhymes. (To top it off, the asshole who acquired the single copy album, Martin Shkreli, was sentenced to prison in a case where a prospective juror stated on the record that he held a grudge against Shkreli because "he disrespected the Wu-Tang Clan.")

Here are some capsule reviews of the new projects brought forth in 2017 thus far.