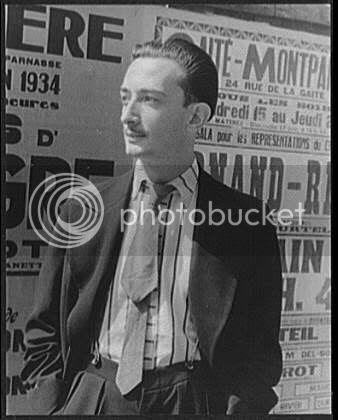 In the late 1920s, a young Salvador Dali left Spain with his lady Gala and moved to Paris to enter into the famous art scene there. At this point, Dali was unrefined, shy, and thrust into an unfamiliar bourgeois atmosphere. His reflections on this period contain funny anecdotes (written in a perfectly weird style) like this one.


"One evening I was having dinner at the Vicomte de Noailles'. Their house intimidated me, and I was extremely flattered to see my painting The Lugubrious Game hung between a Cranach and a Watteau. At this dinner there were artists and society people, and I immediately realized that I was the chief object of attraction. I believe that the Noialles were deeply touched by my timidity. Each time the wine-butler came and whispered the name and year of the wine into my ear with an air of great secretiveness, I thought it was something very serious that he had come discreetly to tell me---Gala run over by a taxi, or a furious surrealist who was coming to beat me up---and I would turn livid, leap up and prepare to leave the table. Then, in a louder voice so as to reassure me, and looking with the utmost dignified intentness at the bottle lying prone in the little basket, the butler would repeat "Romanée 1923." At one gulp I would drink down this wine that had just so terrified me and thanks to which I recovered my hope of overcoming my timidity and of being able to talk.

I have always admired---and I did so particularly at this time---the person who, without having anything really sensational or important to say, manages throughout a whole dinner of twenty people to steer the conversation in whatever direction he chooses, to make himself heard in the midst of a general silence at the right moments without having to stop eating---in fact, eating more than the next fellow---and still has time for an occasional slyly calculated pause during which he gracefully and self-confidently stops the flow of conversation just long enough to brush aside the danger of anyone's taking advantage of his absorption to kindle fresh hearths of conversation, or---in the extreme case in which this should occur---is able to extinguish them at the desired moment without seeming to make the slightest effort, and at the same time give the recalcitrant ones the impression, when he interrupts their incipient conversation against their will, that it is they who are interrupting by asking him in a voice that verges on the impolite to repeat his last remarks so that they can follow the course of his argument in which they have not the slightest interest."