As Robert Anton Wilson liked to point out, reading about or discussing synchronicity usually tends to vastly increase the amount of strange coincidences in one's life. In my experience, whenever I've been engaged in reading Carl Jung, or the I Ching, or Wilson himself, synchronicities do tend to swirl around me.

This same thing especially applies to reading James Joyce. His major works are filled with synchroncities and coincidences. In his book Joyce the Creator, Sheldon Brivic attempts to document all the synchronicities embedded within the single day of Ulysses and he lists over a hundred of them. Robert Anton Wilson's book Coincidance has a few excellent essays about synchronicity in Finnegans Wake. It's safe to say that it's a big part of Joyce's major works (though the word "synchronicity" was coined by Jung more than ten years after Joyce's death).

These past few weeks I've been undertaking the task of thoroughly reading Finnegans Wake, this deep involvement tending to leave me in an unusual mindstate. I find myself thinking about certain words or phrases all throughout the day and often I can't wait to get home and dive back into the strange book. I've read four chapters thus far and I'm really enjoying it. With lots of notes already written about it, I'll have plenty to say about the book in an upcoming post.

For now, I'd like to share three funny coincidences that occurred over three consecutive days right around the time I'd begun reading the Wake. 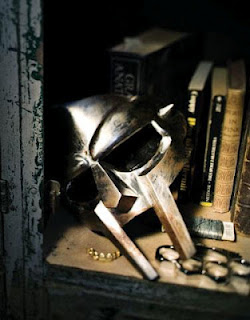 We knew something was up. He'd been far too prolific, rapidly growing a rabid and devout fanbase, to suddenly disappear from the scene with his reputation disintegrating into the image of an indolent pot-bellied derelict who left collaborators, record labels, and fans agitated with his inability to finish projects. Hip hop heads have longed for the completion of his two most sought-after records, respective joint efforts with Madlib and Ghostface Killah, for something like 5 years now.

Finally, we've at least got an explanation for his absence.

The metal-masked writer/producer/performer known as MF Doom (aka The Supervillain) was thwarted upon trying to re-enter the United States in 2010 after a European tour and has remained in exile living in London ever since. An article in Q Magazine explained:


British-born [Daniel] Dumile moved to the US as a baby, but was never naturalised, so avoided leaving the country. But in 2010, possibly assuming his American wife and kids would be enough to secure re-entry, he obtained a British passport and set out on tour.
On return he met with an official who "just wanted to see how many people she could make have a bad day that day." Doom didn't tell her his profession, making him the only rapper ever not to give it the Big I Am. "Imagine me saying that," he says with a laugh. "I'm no big rap star, I'm a regular guy."

Since then he's been holed up in South London.


While stuck over there he has been recording music, though. Suddenly, he's got a new album about to drop, a collabo with producer Jneiro Jarel entitled Keys to the Kuffs, to be released on Stones Throw Records on August 21st.

Here's a new track from the record called "Guv'nor."


In an era ruled by digital music, I still find many releases from Stones Throw to be worthy of physical purchase because of their propensity to craft an all-around artful package. This album features more of the same and they're even including free copies of a 100+ page magazine fully devoted to Doom. Instant purchase for me. More on that here.

As part of the promo push for the magazine, they've put together some colorful YouTube videos including an excellent interview with the artist who originally assembled the Doom mask. Lots of New York City flavor in this one, check it out:

Stormy weather has finally hit here in the middle of Texas.

As I write this on Monday evening, my roof is being pattered with rain and thunder frequently rumbles. Enormous and dark clouds arrived here yesterday, and last night up in Arlington this happened in the middle of a major league baseball game:


A field full of supposedly tough grown men, professional baseball players, made to cower with fear in a millisecond. Watch as they all sprint off the field even though it isn't raining.

Did I mention I started to read Finnegans Wake in earnest this weekend? The 100-letter word in the title of this post is the voice of God in the Wake, the thunderclap which explodes 10 different times in the book, each time signaling a new cycle in history. Adapted from Giambattista Vico's theory of the repeating cycles of human history, in which thunder scares aristocratic, intelligent, arrogantly advanced humankind into a crippling fear of God and they go back to the first stage, theocracy, the Divine Age.

Vico purported that primitive humans were so terrified of thunder that they fled into caves, just as the ballplayers flee into the dugout.

The thunderword written above is on the first page of the book and contains the word for "thunder" in at least 13 different languages.

A loud crash of thunder ("A black crack of noise in the street") also blasts at the very center of Ulysses, marking the middle break in the book where everything changes, a dry barren wasteland gets nourished and rained on. Stephen (a stand-in for the author himself who had a great fear of thunderstorms) is made to tremble in fear as his boasting to friends is suddenly interrupted when "Loud on left Thor thundered: in anger awful the hammerhurler."

As regards the god of thunder Thor and his hammer, the most notable reaction of the baseball players in the video is Josh Willingham, a muscular slugger known as "The Hammer," falling down on all fours and covering his head.


"his heart shook within the cage of his breast as he tasted the rumour of that storm."

With MLB.tv's notoriously covetous and absurd blackout rules (put in place to make sure cable companies pocket as much money as possible) I was barred from watching that Texas Rangers game last night despite paying for a baseball media package. I only got to see the great Thunderclap video when I read Grant Brisbee's hilarious coverage of it over at Baseball Nation. I strongly recommend checking that piece out, it made me laugh out loud at least 3 times. This picture that he linked to even made me fall out of my chair in laughter.

Album Review: School for the Blindman by Bronze Nazareth 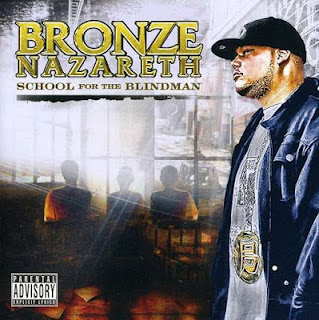 Specs like Ray Charles seeing from his grave
He said "Bronze, you could hear the color of clouds
and see the sounds of existence like braille printed out"
- Bronze Nazareth


Maybe we could have predicted it, maybe we could've seen him coming. Just as the flourishing basketball culture of the early to mid-90s---with various flavors of expertise on display from Michael Jordan, Magic Johnson, Charles Barkley, Clyde Drexler, Larry Bird, etc---merged with the DNA of a growing young super athlete to eventually become the all-around hoops behemoth that is LeBron James, the apotheosis of hip hop in the 90s was experienced by a growing Motown youth of musical precocity to eventually bring forth Bronze Nazareth, Wu-Tang's #1 draft pick.