In Memory of William Gass (1924-2017), One of the Consummate Sentence Sculptors of Our Time 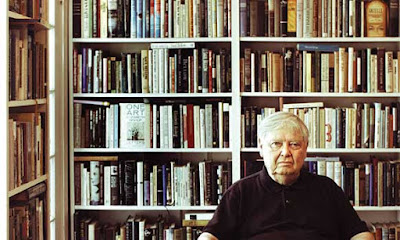 The true alchemists do not change lead into gold; they change the world into words.
- William H. Gass

I think of myself as a writer of prose rather than a novelist, critic, or storyteller, and I am principally interested in the problems of style. My fictions are, by and large, experimental constructions; that is, I try to make things out of words the way a sculptor might make a statue out of stone.
- William H. Gass

One of my favorite writers, William H. Gass, died last week at age 93. Since discovering his work a few years ago, I'd actually found it surprising that he was still alive. A figure such as he, tirelessly devoted to the primacy of the aesthetic experience of literature, seemed entirely incongruent living within our current times besotted with screen-addiction and momentary attention spans.

Gass made his living as a philosophy professor in St. Louis, Missouri of all places, while carving out a career as a prolific author and literary critic. His novels sit high atop the postmodern pedestal, but it was the delicious prose of his award-winning essays that led me to prostrate before the master in awe. Gass was a prose stylist extraordinaire, a devoted sentence sculptor who sought the perfect arrangement of sound and syllable in everything he wrote. I'll never forget the initial jolt of excitement upon experiencing his writing for the first time. It struck me that I now had all my life to devour everything this magnificent author had written. I was on vacation in Denver, staying at an Airbnb in a refurbished old gas station when I cracked open the book of essays A Temple of Texts and was entranced at the erudition and passion Gass delivered through a prose that was alive, popping, rhythmic, serious yet fun. I've never encountered anyone who can so perfectly communicate the rapturous pleasure of reading books, actual physical texts. I encountered his incredible essay "A Defense of the Book" and nearly stayed up all night reading it; only Gass could turn lit crit into a page-turner. Observe his argument for owning books and keeping a library:

Should we put these feelings for the object and its vicissitudes down to simple sentimental nostalgia? to our commonly assumed resistance to change? I think not; but even as a stimulus for reminiscence, a treasured book is more important than a dance card, or the photo that freezes you in mid-teeter at the edge of the Grand Canyon, because such a book can be a significant event in the history of your reading, and your reading (provided you are Significant) should be an essential segment of your character and your life. Unlike the love we've made or meals we've eaten, books congregate to form a record around us of what they've fed our stomachs or our brains. These are not a hunter's trophies but the living animals themselves.

It was my friend Charlie, a fellow book fiend whose knowledge bank is substantial with 20th century scribes, who pointed me towards William Gass. A few years ago I had asked him to recommend some modern authors who specialize in exquisite prose style. He'd already led me to Pynchon's novels and now he recommended the likes of William Gaddis and William Gass. I soon read Gaddis' A Frolic of His Own and sought out Gass, zipping through his short story collection and the monograph On Being Blue with mixed feelings about both. Once I found my way into the Temple of Texts, though, there was no escaping. I picked up another essay collection, Finding a Form, and marveled at pieces like "The Book as Container of Consciousness" and "The Vicissitudes of the Avant-Garde" and then slowly devoured Life Sentences whose most striking piece was a lengthy, sober meditation on the unfathomable, sublime quantity of people slaughtered by the Nazi regime. Since learning of his passing, I've summoned copies of the other essay collections produced by Mr. Gass from all corners of the globe to converge in my library.

The recommendation from Charlie came on the strength of the novel The Tunnel, Gass's masterpiece that he labored on for 30 years. I've been distantly circulating around that cinderblock-sized meganovel for a little while now, reluctant to get too close to it but intending to read it eventually. Book critic Steven Moore called it "truly one of the great books of our time" and observed, "The sheer beauty and bravura of Gass's sentences are overwhelming, breathtaking; the novel is a pharaoh's tomb of linguistic treasures."

I had actually written up my thoughts about William Gass last weekend upon hearing the news of his death, only to have that piece suddenly disappear into the ether. It was a rare and infuriating experience, but I soon accepted Joyce's dictum that mistakes are portals of discovery. It dawned on me that William Gass had nearly finished composing his first novel, Omensetter's Luck, when the manuscript was stolen off his desk, forcing him to devote six months to rewriting it all from scratch. (The resulting novel was hailed by The New Republic as "the most important work of fiction by an American in this literary generation" and listed among David Foster Wallace's "direly underappreciated" novels of the latter half of the 20th century.) This kind of devotion and determination exemplifies Gass's standing as a writer's writer. He was a fiercely passionate celebrant of the artfully written word, a prolific composer of ornate prose, and his penchant for luxuriating on the love of letters has served to exponentially amplify my own enjoyment of literature.

In the wake of his passing, a number of thoughtful obits have popped up. Here are links to those with some choice chunks from each as well as links to some Gass interviews.