Continuing the altogether futile and pointless exercise of predicting how each division will shake up and providing an Over/Under selection against Baseball Prospectus' 2018 win projection for each team, this time in the National League.

There's quite a bit of monotony here---the Dodgers have finished atop the NL West every year for five years running and they are an easy bet to win it again in 2018. The NL Central crown has gone to either the Cardinals or Cubs every year since 2013. The Cubs, Dodgers, and Nationals were NL division winners each of the last two years and are all favored to do it again this year. Certainly seems there's a lack of parity, but admittedly I enjoy the intrigue it creates since any challenger(s) to the hegemony of the Dodgers-Cubs-Nats stronghold tends to be a fascinating underdog, like the Mets in 2015 or the Brewers last year. I also enjoy the October rivalries that have developed between the Dodgers-Cubs-Nats and their respective stars. Parity be damned if it means we get to witness the game's elite players---Kenley Jansen facing Bryce Harper with a series on the line comes to mind---deciding the most high stakes ballgames.

These picks represent what I objectively expect to happen---what I would bet on---not how I want it all to shape out. Personally, I dislike the Nats about as much as I dislike the Yankees. They're the key rival to my beloved Mets. Their lineup features Daniel Murphy, a former beloved Met who immediately became an All Star once he joined the arch rival Nats. Bryce Harper is entertaining to watch but he's also a perfect baseball villain. I dread my Mets having to deal with the relentless pest Adam Eaton all year. And the game's most dominant pitcher besides Clayton Kershaw, three-time Cy Young winner Max Scherzer, stands atop one of the best rotations in baseball. It seems they may have finally addressed their one weakness, the bullpen, too. Much as I hate the Nats and will heartily root for their downfall, that roster is just too deep, the dominance of that core too imposing to not expect them to win the NL East again and try to finally, at long last, make it past the first round of the playoffs! That last part I wouldn't bet on, though.


Last year was a sad one for Mets fans---everyone got hurt, beloved players (Granderson and Duda) were traded away and the promising pitching staff imploded, finishing with the second-worst ERA in the NL. Thankfully, Sandy Alderson responded with big changes: he brought in an entirely new medical staff, about which...we'll see; added some sluggers in Todd Frazier and the returning Jay Bruce; bolstered the bullpen with Anthony Swarzak and picked up a perfectly reliable innings-eater to hold down the back of the rotation in Jason Vargas. The main reason I have high hopes for the Mets this year, though, besides the irrationality of my fanhood, is the addition of Mickey Callaway as the new manager, replacing Terry Collins. Callaway earned accolades for his handling of the Cleveland pitching staff the last few years, guiding them to one of the best overall performances by a starting rotation in baseball history last year. The Mets success depends entirely on their immensely talented starting rotation---if Callaway can get this staff to do their best work the way he did in Cleveland, the sky is the limit for the Amazins.

Nearly two decades into the 21st century, Baseball has evolved into something weird. Last year was the first time I can remember that I began to lose interest in the sport. It's been one of my favorite things, period, for as long as I can remember. Last year that started to change.

The ball is clearly modified in some way to cause a great deal more home runs. It makes the game feel cheapened. Records are being shattered. Yes, we've been through something like this before with the steroid era, but it feels worse now since it's so obvious to all observers that the league itself is responsible. There are not many things that can make me feel unenthused about baseball. I don't even mind the long games that much. But a baseball game becoming a sideshow full of bizarre, fluky home runs and endless strikeouts is just not entertaining to watch.

A quiet offseason during which nearly a third of all clubs made clear their lack of intent to significantly improve their chances made things even more unsettling. As the league itself floats the idea of making catastrophic changes to the rules (allowing teams to select any three hitters to bat in the 9th inning; starting extra innings with a runner in scoring position automatically), it seems baseball is on the verge of becoming something unrecognizable.

Despite all that, the irrepressible joys and expectations of spring have me excited for the upcoming baseball season, hopeful for my Mets and A's and intrigued to see some of the newly reconfigured teams like the Angels and Brewers.

As usual, I've thrown together some thoughts on each team with a prediction for where they'll finish. This includes an Over/Under pick against the projected win total generated by Baseball Prospectus' PECOTA system. (A pointless exercise for multiple reasons, sure, but that hasn't stopped me from doing this for the eighth consecutive year.)

Some of Eugene Berman's work reminds me of Dali's desolate haunted dreamscapes. 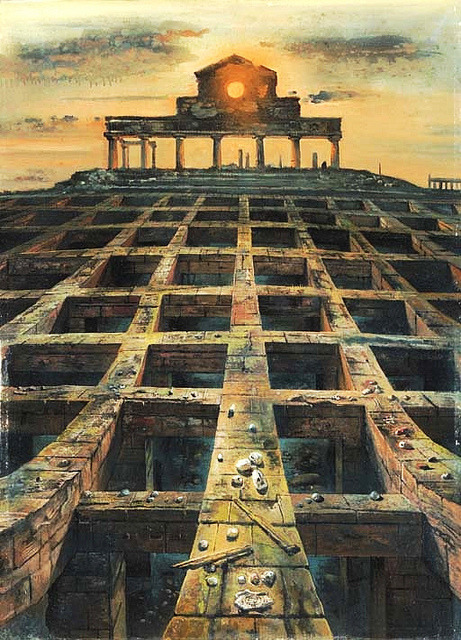 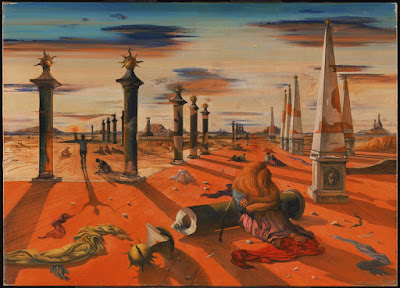 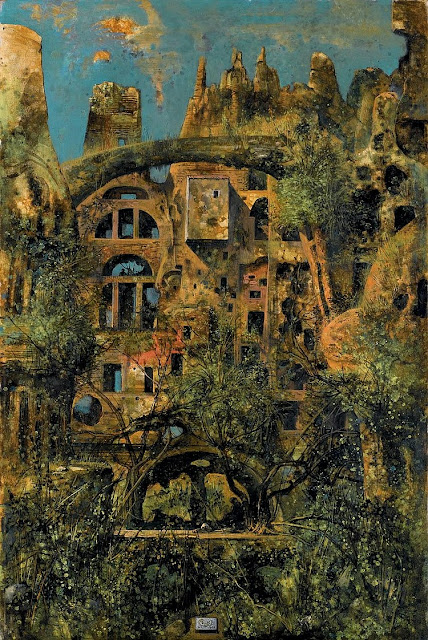 The works of Erró on the other hand are abundant kaleidoscopic collages of pop culture and modern media. Famous works of art commingle with comic book heroes, Disney cartoons, and the imagery of popular advertisements in his all-encompassing feasts of visual consumption. His work feels like a perfect representation of what postmodernism claims to be---sampling from all available art forms, the raw materials deconstructed and reorganized, juxtaposed and arranged to make one see it all in a new way. 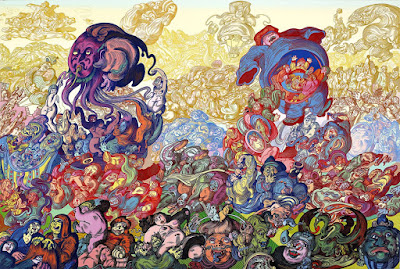 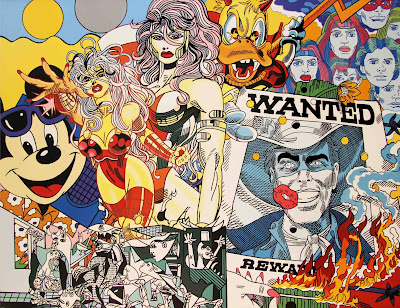 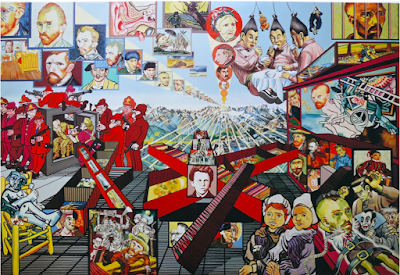 From their latest album Basement Seance.
Posted by PQ at 10:48 PM No comments:

Looking over at the Blog Archive for "A Building Roam" one notices that in the eight full years of its existence, the number of posts has steadily declined: 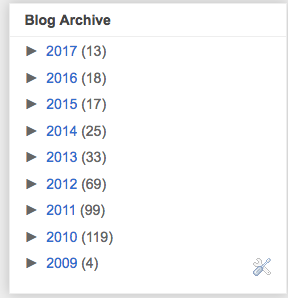 Obviously I must have been really excited to have a place to channel my writing when this thing first got going back in 2010. Don't know how the hell I managed to post 119 times. I guess because I was working part-time in those days, unwilling to fully jump into the rat race and content to barely scrape by money-wise. I hoped the practice of writing this blog would lead me to a writing career. The biggest drop-off happened in 2013 when the total number of posts fell by more than half from the previous year. A few reasons for that: that year I met the girl who would become my fiancée; started working full-time; and started writing a second blog. Since then my blog posting has slowed down considerably.

I have no plans to shutter this place, though. In fact, I've got many ideas in the pipeline. Another noticeable reason for the decline in activity here is I've put more focus on writing longer, more thoughtful posts that are more like essays, rather than just posting video clips or music or article links or quotations or other brief snapshots of the moment. But I do have a backlog of those things to share here as well.

There are many other reasons for this blog being quiet of late. Most importantly, my writing energies have been invested in other projects---not just the other blog, but also two books I've been chipping away at for years now. They both seem stuck in a state of being half-finished no matter how much work I put into them. It's looking like I'm going to be presenting a paper at a James Joyce conference in Antwerp, Belgium in a few months, so I'm working on that too. I'm also working full-time at a challenging job, dealing with a torturous daily commute, managing a bi-monthly reading group, taking care of chores at my house, being present in a relationship, reading as many books as I can, watching lots of sports, exercising irregularly, and occasionally relaxing or socializing. All that and I'm trying to maintain a balance of staying aware of what's going on in the world without losing my mind.

All of which is just to say---there's plenty more to look forward to in this space so please stick around!