It's getting late. I'm tired and my eyes feel like they're half shut. What better time to write a little post about one of my favorite basketball players ever, one who is known in some circles as The Big Sleep: Tracy McGrady.

At the annual Sloan Sports Analytics Conference this weekend, McGrady was held up as an example of wasted talent; greatness squandered through laziness. His former coach, Jeff Van Gundy, cracked some jokes about poor practice habits and a whole auditorium laughed and listened to a few gentleman on a stage talk about how great T-Mac should have been, if only he gave a shit. If only he worked harder or practiced more. 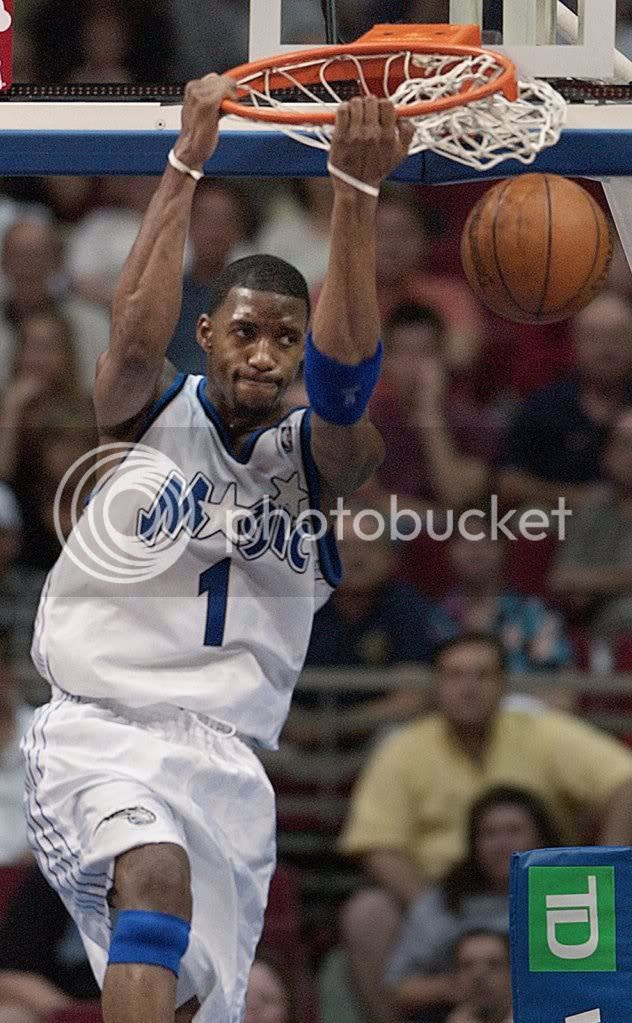 Back in 2000, I read a Sports Illustrated piece about McGrady and his new role as Grant Hill's sidekick on the remade Orlando Magic. Interested in checking out what this McGrady guy had to offer, I started checking for any games on television featuring the Magic and watching him closely. It was right around this time that my NBA fanhood was reborn after a brief hiatus. McGrady was a spectacle to watch, a visual feast for basketball fans. A long, lanky athlete, he frequently looked like a pro who'd stepped onto a street ball court to have some fun. With his size and athleticism, he was basically the perfect basketball player. His jumpshot was a thing of beauty, a sudden rise and quick release that always seemed to create a perfect crisp snap of the net; he was one of the league's most exciting finishers at the rim; he possessed amazing court vision and passing skills that somehow forced his crappy teammates to make baskets (the superstar Hill was always in street clothes with severe ankle problems); his long-limbed, blanketing defense brought comparisons to Scottie Pippen---and he was only 21 years old.

With his droopy eyes and smooth lanky motions, the guy often looked like he was doing it all in his sleep. Writers and TV commentators often mentioned the humorous fact that one of his listed hobbies was sleeping. It didn't take long for the 6-foot-8 McGrady to acquire the nickname The Big Sleep.

During that time the Magic's games became must-see TV for me. I started tape-recording (with VHS tapes...on a VCR) their games any time they were on national TV or going up against the Knicks or Nets on a local channel. My favorite team, the Knicks, was clearly his favorite team to play against and he would frequently bring new moves to the table against them, embarrassing my team in such a way that I didn't care that they were getting their asses whooped. It was fun to watch! Even his headfakes were cool. Instead of just lifting up his chin for an apparent jumpshot, he lifted the ball high above his head like a yo-yo and then zoomed past the befuddled defender for a dunk or lay-up. On defense, he would frustrate and embarrass my favorite Knick, Allan Houston, with his long arms providing the perfect stopgap to Houston's only real weapon, a standstill jumper.

Over the next few years T-Mac became a superstar, his arrival punctuated by a self-pass-off-the-backboard dunk in the All Star Game. With Grant Hill sitting out on a bad ankle, McGrady established himself as a one-man show, carrying the Magic to three straight playoff appearances. His team fell short in the first round each time although McGrady averaged over 30 points in every series. A prolific scorer, passer, and defender---he still couldn't win by himself.


In 2004, the Houston Rockets acquired McGrady to team up with Yao Ming for a perfect match against the West Coast powerhouses but Yao soon succumbed to a series of injuries and left T-Mac to carry the team once again. There were many great moments with the Rockets, especially the epic 13-points-in-35-seconds to defeat the Spurs, one of those events which I'll always remember where I was when I saw it (standing enraptured right in front of my bedroom TV with my arms folded). But, once again, McGrady failed to lead his team past the first round of the playoffs and was harshly criticized for it.

Before turning 30, he was hit with a number of injuries that helped to erode his skills and over the last few seasons he's languished as an oft-injured part-timer for a couple of crappy teams (Knicks and Pistons). Because of an apparently poor work ethic, his career narrative is becoming imbued with a sense of failure and missed opportunity. Van Gundy and the Analytics Conference folks weren't the first to point it out. (Heck, I even mentioned it in my very first post on this blog.) 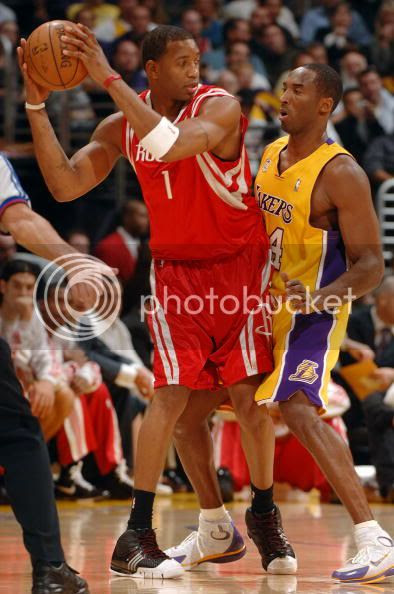 In opposition to this somber view, a few NBA bloggers have stepped up recently to defend the T-Mac legacy, reminding us of the heights he reached when he was healthy and the Hall of Fame career he had despite our best efforts to label him a failure. I particularly liked this piece from Dan Devine (a fellow Staten Island native, I've just realized) over at the Yahoo blog Ball Don't Lie and Zach Lowe of Sports Illustrated assertively set the record straight as well. Via Outside the NBA's Twitter page, here is another great post in defense of McGrady's excellence entitled Have Respect: He Was Legend which, among other things, calls to our attention that we once had to debate who was better: T-Mac or Kobe. Because of his defense and point guard-like passing skills, I still say T-Mac was better at that point in time but, of course, Kobe has gone on to win two more rings since then and continues to lead the Lakers to one of the best records in the West.

While farting around on Basketball-Reference.com a bit, I came across an interesting comparison between McGrady and Hall of Fame forward Billy Cunningham, a highly regarded player from the 60s and 70s. His career was also derailed by injuries yet Bill Simmons listed him as the 49th greatest player of all time (with McGrady at #77). The all-encompassing Win Shares statistic is by no means perfect but one of its best uses is for comparing players across different eras. Looking at their careers: McGrady had four seasons that were better than Cunningham's best year. T-Mac was also a more accurate shooter, better passer, and better defender. Cunningham was done as a player by the time he was 33 and, as he's currently playing out the string for shitty teams at age 31, we might soon see the last of The Big Sleep.

Let us hope the hoops community can open their eyes to his greatness instead of whining over our own shattered dreams for him.
Posted by PQ at 12:02 AM