Mixtape in Memoriam of Kobe

From its humble inception 11 years ago this blog began with me showing love for the beauty of Kobe Bryant's jump shot, so now since today would have been Kobe's 42nd birthday I'd like to share some thoughts on the late Lakers legend, plus post a mixtape of choice clips of the Black Mamba.
While I was never a Lakers fan and was usually rooting against Kobe as a Knicks fan (or as a fan of Allen Iverson or Tracy McGrady or Vince Carter as they went up against Kobe), he was such an amazingly talented, flashy, dynamic, high-flying and insanely competitive player it was impossible not to be entertained by his game even as he was kicking your team's ass. Dude was an absolute legend. During the latter half of his career I spent some time living in Southern California and got to watch a lot of Lakers games on local cable. In those days I also had a friend who was a huge Lakers fan and we'd argue about Kobe's place among the all-time greats.
Prior to his tragic death early this year, the most recent memories I had of Kobe, the events that stuck in my head as I-remember-where-I-was-when-that-happened kinda moments, were how bad I felt for him the night he tore his Achilles and how happy I was for him watching his unforgettable final NBA game when he dropped 60 in a win against Utah. And I remember seeing that video of Kobe and Gianna, the father teaching his attentive daughter as they sat courtside at a Brooklyn Nets game, a month before the accident that took their lives.
Looking back on it, the horrible death of Kobe Bryant and his daughter Gianna in a helicopter crash on January 26th stands out as a harbinger of the unthinkably dark and depressing months to come. Strangely, that period of grieving and binge-watching Kobe videos, watching the memorial they held at Staples Center, that was actually the final period of normalcy we had before the world we knew suddenly collapsed. I remember I was at work, on a lunch break when I caught Michael Jordan's eulogy for Kobe at his memorial. (My office would soon be closed indefinitely.) The Staples Center that day was filled with the gods of basketball lore all gathered together in the arena Kobe called home, all mourning a fallen star. Everybody packed together in Los Angeles and just one month later all public gatherings would be banned, NBA's season indefinitely shut down, America's confrontation with the coronavirus escalating.

I remember that Sunday afternoon hearing the news about Kobe and Gianna and it was a gut punch. That shit hurt for a while. I was shocked how hard it hit me. Just seeing headlines with the words The Death of Kobe Bryant just looked surreal, bizarre, fake or unthinkable like The Death of Superman. I kept talking to friends about it, trying to process it with anyone who understood the impact of the death of Kobe, and at night I'd get lost in watching every YouTube video of Kobe I could find, reliving his greatest highlights and reliving my history as a basketball fan, commiserating with every commentator on the loss of Kobe from late night talk show hosts and retired NBA greats to Randy Moss and Jason Alexander and anybody who felt or understood the impact of the death of Kobe. The shock was well captured by Jon Batiste talking to Stephen Colbert, describing that viscerally painful realization that "even the mighty among us, those who seem like they'll live forever, the immortal ones could be gone (snap) just like that."
After the death of Kobe I felt like something inside me broke. To heal it I had to binge watch Kobe videos. I was trying to keep my memories of Kobe alive, everything I had ever loved and been inspired by about Kobe, I was trying to bring it all back to life. Having had a while to think about it now, what made me love Kobe so much, besides the entertainment value of his game was his drive, his inspiration, his internal push to achieve greatness. He was born with gifts, the son of pro basketball player Joe "Jellybean" Bryant whose hoop genes he surely inherited, but Kobe was never complacent, he famously had an ethic to work as hard as he possibly could to get the most out of his gifts. He was notoriously an asshole in his competitive excesses but he was driven to be the absolute best to ever play the game of basketball, determined to outdo his idol Michael Jordan. There was a great scene in the ESPN Jordan documentary where you hear Jordan in the locker room before an All-Star game talking about the "little Laker boy" whose cockiness would get the best of him. Kobe/Jordan battles evolved sharply over the years until the torch was officially passed to the Black Mamba who reached his scoring peaks around when Jordan finished his twilight years with the Wizards. Seeing Jordan pour his heart out in mourning his little brother at the Kobe memorial, it felt extra heart-wrenching that young Kobe was being laid to rest while the older Jordan was delivering his eulogy. The whole thing brought to the forefront for me the unyielding passage of time, the inescapableness of death, and the cold reality of our loneliness as human beings who are, despite all of our impacts and connections, born alone and who die alone.
At the same time, in the aftermath of the death of Kobe I felt the reality of the idea espoused in the works of James Joyce which essentially amounts to: in death, absence can become the greatest form of presence. I thought about Kobe more in the wake of his passing that I had in many years. Kobe was on my mind constantly for weeks. I know that was the case for a lot of people. Jordan captured that in his eulogy, describing how we all feel like some part of us died when Kobe died. I'm still thinking about and feeling some feelings about Kobe Bryant today on his 42nd birthday.
And so in honoring his memory, here is a mixtape of some of my favorite videos that capture what made Kobe Bryant such an iconic and inspiring figure.
Read more »
Posted by PQ at 11:57 PM No comments: 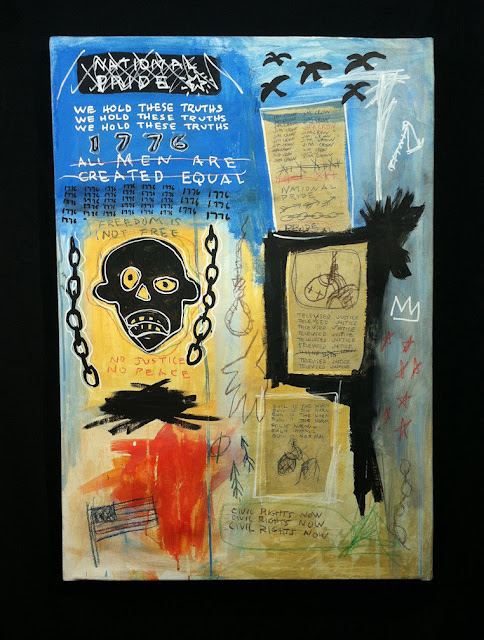 Last month I had an article posted at the Hip Hop Golden Age website "Who Got the Camera? by Kevlaar 7 & Bronze Nazareth: A Lyrical Breakdown" which takes a close look at two verses from the title track of the late Kevlaar 7's album Who Got the Camera? from 2011. As I have written about a few times before, that album was loaded with messages exposing social injustices and it came forth as an outcry against police brutality and racial violence. As Ari Melber talked about in a recent segment that aligns in some ways with my piece, this is a topic that rappers have made music about for years and since they were exposing what is now a widely accepted truth some of them deserve Pulitzers. Kevlaar 7 passed away on December 23, 2014. The reality of present day racism and its historical roots was always a major theme in his music. He explicitly came to warn us all but he knew he was also ahead of his time, as he put it on the opening track to the Wisemen album Children of a Lesser God, "It's too early, truth is dirty."


Just like his brother Bronze Nazareth, Kevlaar was a brilliant lyricist (and a great producer too) and these two came together on this song to deliver a poetic exposé documenting the ongoing atrocities of racial violence in America. Now that these issues are front and center in American life in 2020, so many of us have been compelled to try to learn more about these issues, seek out knowledge and read more history. American history is so often presented in a way that tries to conceal the bad stuff, but we need to face it if we will ever be able to overcome its painfulness. Bronze and Kevlaar wrote about this history and its present manifestations in their verses often, although rarely as concentrated and focused as on this track. This article I shared is actually an excerpt from a book I've been working on for several years where I try to unpack, interpret, and expand on many verses from Bronze. That book also includes another song he did with Kevlaar devoted to bringing this same topic to light. We are living through a sudden awakening now and it is helpful as ever to glean historical facts and information from the poetics of tuned-in rappers writing about Black America for those of us who want to see what's been going on and try to envision a better future.