The Tree of Life (Expectation)

Though it was first released to the public three months ago, I have only just recently had a chance to see the trailer for the upcoming film The Tree of Life. It looks pretty special, the trailer had my soul buzzing. Check it out:

Here is how writer/director Terrence Malick describes the film:


We trace the evolution of an eleven-year-old boy in the Midwest, Jack, one of three brothers. At first all seems marvelous to the child. He sees as his mother does with the eyes of his soul. She represents the way of love and mercy, where the father tries to teach his son the world’s way of putting oneself first. Each parent contends for his allegiance, and Jack must reconcile their claims. The picture darkens as he has his first glimpses of sickness, suffering and death. The world, once a thing of glory, becomes a labyrinth.

From this story is that of adult Jack, a lost soul in a modern world, seeking to discover amid the changing scenes of time that which does not change: the eternal scheme of which we are a part. When he sees all that has gone into our world’s preparation, each thing appears a miracle—precious, incomparable. Jack, with his new understanding, is able to forgive his father and take his first steps on the path of life.

The story ends in hope, acknowledging the beauty and joy in all things, in the everyday and above all in the family—our first school—the only place that most of us learn the truth about the world and ourselves, or discover life’s single most important lesson, of unselfish love.

From the looks of it, with its scenes of everyday life growing up, as well as the visual splendors of the planets, the cosmos, inner and outer space, this will probably be one of those extraordinary films that produces a feeling of the sublime; the static feeling of "aesthetic arrest" as described by James Joyce in his first novel. I'm definitely looking forward to it.

When looking up information about the movie, every site emphasizes that the director/writer, Malick, has kept the details about the film under tight wrap for years now, not letting anything leak out into the public sphere. This reminded me of another famous work of art with the same name: a magnificent, elaborate marble frieze entitled The Tree of Life by Viennese painter Gustav Klimt. Klimt worked on his Tree of Life for about six years, collaborating with many artists and artisans who he instructed to keep the work a secret. The final piece is one of Klimt's most famous images. 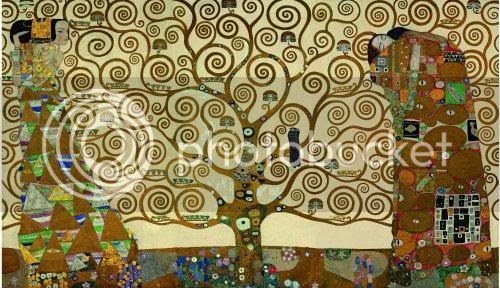 The two main motifs are (from left to right) Expectation and The Embrace. I have a print of this painting (hard to call it just a "painting" because the real work is etched into a marble wall) hung on the wall right behind me as I write this, the curling branches seemingly bursting out of my head.

And my Expectation is through the roof for this new film of the same name.
Posted by PQ at 4:17 PM