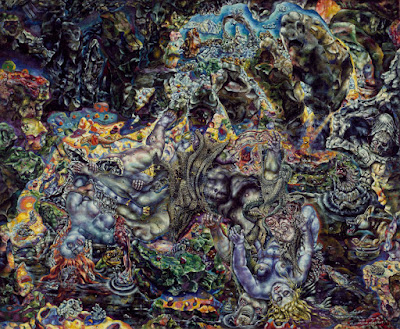 Research for Part 2 of my book brought me to the above. Observe the dark, Fruity Pebbles-flavored phantasmagoria that is Ivan Albright's rendition of The Temptation of Saint Anthony from 1946.

I encountered this through my study of Salvador Dali's version of the Saint Anthony story (the focus of my book). A contest in 1946 brought together a dozen of the period's greatest painters to render the Temptation of Saint Anthony. Dali, despite creating one of his most iconic works, finished in fourth. Max Ernst won, deservedly so. Albright had previously won a similar contest, getting his Picture of Dorian Gray into a film rendition of Wilde's novel.

Albright finished an impressive second in the contest. His version is astounding to me. That look on Saint Anthony's face, once you make it out through the enveloping phantasms, is so perfect. Albright's work often seems to be beautifully, horrifically gross. In Saint Anthony, the gross is turned down, and the beautiful ramped up by a vibrant color selection.

The awestruck response I had to this painting led me to look into Albright's work where I found another painting I've been rapturously gaping at recently, Poor Room. 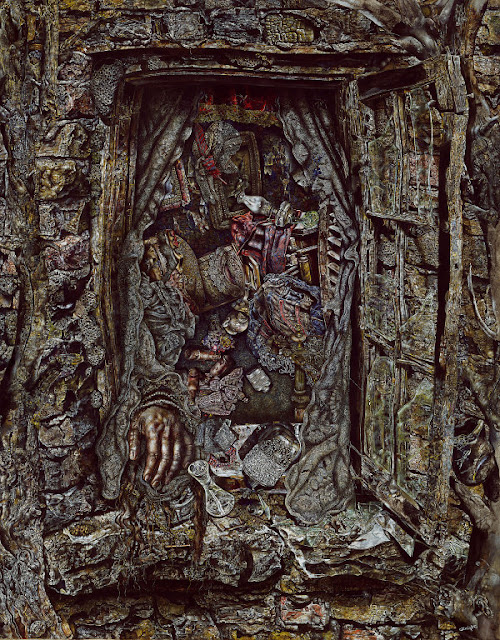 Ivan Le Lorraine Albright (February 20, 1897 – November 18, 1983) was an American magic realist painter and artist, most renowned for his self-portraits, character studies, and still lifes. His dark, mysterious works include some of the most meticulously executed paintings ever made, often requiring years to complete. (wiki)

Albright's work rewards a microscopic focus and is macroscopically pleasing to the eye. That corroded frame in Poor Room draws me right in. His technique and execution is phenomenal. And the dude was from Illinois, of all places.

Despite possessing no national pride to speak of, I'm always pleased to encounter great modern American minds and creators I've never known of before, like author and essayist William Gass, also of the midwest, whose work I've been very intrigued with lately. Gass writes savory essays on art, among so many other things, and loves Joyce and Finnegans Wake. Another American essayist of utmost prose-crafting ability, Guy Davenport, has been inspiring and educating me lately via his treasure trove, The Geography of the Imagination. Therein he synthesizes arts and artists through a collection of 40 essays. (He also waxes in praise of Joyce and Finnegans Wake frequently.)

Throughout Geography of the Imagination, Davenport frequently lavishes praise and appreciative analysis on an enormous painting called Cache-Cache or Hide-and-Seek (1942). I'd seen this image once before many years ago but lately have been deeply absorbed in it. There is a magic to this painting. I can stare it for hours and hours. I regret somehow missing out on it during my last trip to the Museum of Modern Art in New York. 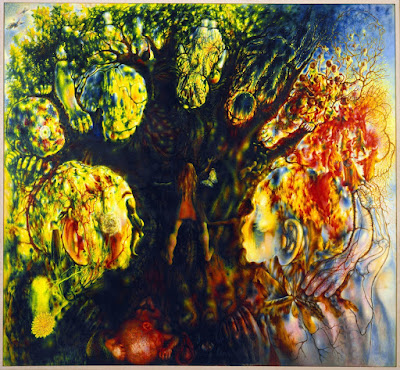 This enormous painting is a pictorial equivalent of the method of Finnegans Wake. All of its images are puns which resolve into yet other punning images. First of all, it is a giant oak tree against which a girl presses herself: she is the it in a game of hide-and-seek. The hiders are concealed in the tree itself, so many children, who are arranged like the cycle of seasons, winter children, summer children.

These children, seen a few paces back, become landscapes, and eventually two folded arms, as the tree itself resolves into a foot and hand; and, further back, the face of a Russian demon, mustached and squint-eyed. Further back, the whole picture resolves into a drop of water---Leeuwenhoek's drop of water under the microscope in which he discovered a new world of little animals; the drop of crystal dew on a leaf at morning which acts like Borges' aleph or Blake's grain of sand or any Liebnizean monad mirroring the whole world around it; Niels Bohr's drop of water the surface of which led him to explain the structure of the atom.

This is a very modern picture, then, a kind of metaphysical poem about our non-Euclidean, indeterminate world. But at its center there is the one opaque detail in the painting: the girl in a pinafore hiding her face against the tree.- Davenport, The Geography of the Imagination, p. 24


Later on, in weaving a web of interrelated artists (as he does so well all over this book), Davenport tells of a visit William Carlos Williams paid to Tchelitchew's studio in 1942 where the painter was at work on another gigantic epic painting, Phenomena. 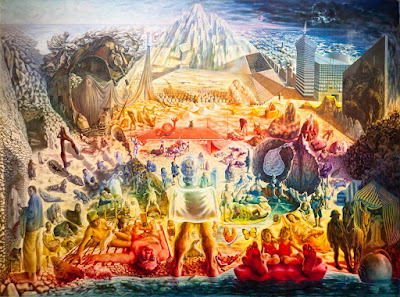 This painting is iconographically a Temptation of St. Anthony, with monsters of all sorts, monsters which, as Dr. Williams, a pediatrician, observed to the painter, are all teratologically exact. - Davenport, p. 49