"Thirst for Knowledge Thursdays" is a new weekly digest in which I will select a book (or two) off my shelf, say a few things about it, and suggest that you read it. Boom. 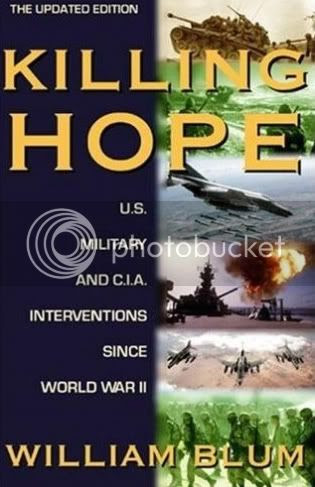 The first book I've selected is an important one for properly comprehending the current global climate and cutting through the bullshit our news media spreads. Killing Hope: U.S. Military and C.I.A. Interventions Since World War II is both a highly readable history book and an important guide to understanding the way our insidious intelligence agencies work. The book is written by William Blum, a former government operative who left the State Department in the late 60s because he was disillusioned by the Vietnam War.

In the book, he thoroughly outlines and tells the story of over 50 different invasions, staged coups, tortures, drug trafficking, disinformation, assassinations, mass murders, and other heinous acts orchestrated or directly perpetrated by the U.S. military and C.I.A. The facts are all backed up by over 50 pages of footnotes. What's most shocking, especially when you read the stuff from the last 30 years or so, is how often the intelligence agencies openly admit to carrying out campaigns of misinformation, planting and spreading fake stories all throughout the American news to sway people's opinions in one way or another. For instance, in the chapter on Ronald Reagan's battles with Libya in the 80s, Blum notes that Newsweek uncovered and exposed (thoroughly) the C.I.A.'s plan to remove Muamar Qaddafi in an August 1981 issue.


The plan called for a "disinformation" program designed to embarrass Qaddafi and his government ; the creation of a "counter government" to challenge his claim to national leadership; and an escalating paramilitary campaign of small-scale guerilla operations.

Immediately afterward, the U.S. began flying fighter jets over Libyan airspace to provoke retaliation. They shot down two Libyan planes and then the Reagan crew sparked a whole bullshit terrorist story using the idea that "they [the Libyans] fired first!" There were reports of Libyan plans to assassinate Reagan, Libyan terrorist cells in the United States, and all the same exact stuff we've been fed about Iraq/Osama bin Laden/Al Qaeda for years now. Reagan flexed his muscles and his Hollywood pipes and suddenly the whole country was rallied behind kicking Qaddafi's ass. Somehow, he survived, but I'll let you read the book for the rest of the story.

Of course, the situation in Libya has now recently descended into chaos. But, I advise you to read between the lines. You can read more about Mr. Blum and his excellent book here at his site which also includes a bunch of free chapters to preview. 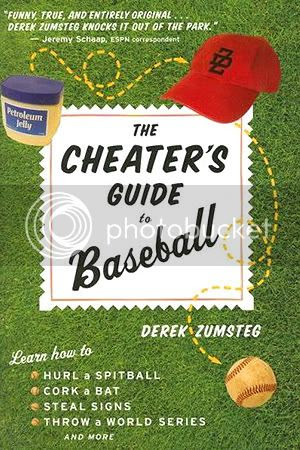 On a lighter note, I finally picked up a baseball book which I've been meaning to read for a while. The Cheater's Guide to Baseball is written by Derek Zumsteg, formerly of the great crew at Baseball Prospectus, and a highly entertaining writer. The book covers baseball's rich history of cheaters, cheating methods, and other hi-jinks including sign-stealing, corked bats, spit balls, gambling, and even a chapter on heckling and fan participation.

I've only just recently acquired the book and read just a couple of chapters but it looks great (photos, diagrams, drawings) and Zumsteg's writing has always been excellent. It's on my list of books to read as baseball starts coming out of its winter slumber and I recommend it to anybody else who's in the process of preparing for the upcoming season.
Posted by PQ at 3:51 PM