Somebody is living on this beach.
- Wittgenstein's Mistress, p. 240

Quelqu'un vit sur cette plage.
[Somebody is living on this beach, French] 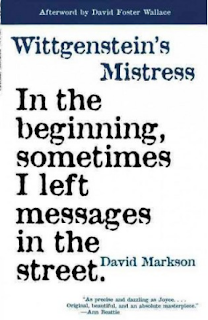 My reading recently has quickly ricochet'd through the later works of author David Markson, catapulting from Reader's Block (1996) through This Is Not a Novel (2001) into Vanishing Point (2004) on the way to The Last Novel (2007). My binge through this tetrad of experimental novels known as "The Notecard Quartet," styled as meandering strands of loosely linked bits of art historical data written as terse one or two line paragraphs (and originally composed by Markson on index cards), this began on the strength of persistent hints from my Santa Cruz pals Charlie and Luke to read Markson's postmodern masterpiece Wittgenstein's Mistress. My copy of that novel was acquired in Austin a couple years back when I happened to be at a bookstore with Charlie and Luke and they both suggested I'd dig it. They were on point. During a recent trip to Santa Cruz and the San Fran area I finally cracked open Wittgenstein's Mistress and zipped thru it enthralled. The impact of jutting single line paragraphs presenting one mental nugget after another over and over becomes a compulsive reading experience, oddly addictive. Bookworm host Michael Silverblatt compared it to a nutritional snack food for the mind.

To compose an impactful page turner out of a staccato of epigrams and ephemera with no chapters or conventional story elements was Markson's stated goal and manifested gift, repeatedly achieved over the latter stage of his career. After starting out publishing a handful of pulp western and noir novels in the 1960s including The Ballad of Dingus Magee which became a film starring Frank Sinatra, David Markson eventually began to move toward more experimental and original uses of the written word. In the mid-1980s he wrote Wittgenstein's Mistress, a story consisting of the interlinked mental fragments of a narrator known as Kate who seems to be the last person alive on earth. Persevering through 54 (!!!) rejections from publishers who found it either too unconventional or unfit to sell, Markson finally got Wittgenstein's Mistress published in 1988 by Dalkey Archive Press, thanks to the brilliant Steven Moore. The book garnered some laudatory reviews, most notably from David Foster Wallace who described it as "pretty much the high point of experimental literature in this country."

"The Library" by István Orosz