This quote is exactly what Robert Anton Wilson speaks of in his wonderful book Prometheus Rising, particularly in his discussion of the so-called "fifth circuit" or Holistic Neurosomatic Circuit. Wilson uses the computer-technology language that was popular in the late 70s and 80s but he's talking about the same exact thing (faith healing, miraculous rejuvenation, etc are all discussed).

In Prometheus Rising (and a few of RAW's other books), there are exercises at the end of each chapter that are very much like the affirmations Yogananda speaks of; statements to speak or focus on that are so powerful they can activate the powerful energies of the unconscious.

Here are some of my favorite exercises from RAW. These are all proposed as ways to reprogram your mind and your way of experiencing the world which eventually results in a revolution of you.


- Believe that you can exceed all your previous ambitions and hopes in all areas of your life.

- James Joyce said he never met a boring human being. Try to explain this. Try to get into the Joycean head space, where everybody is a separate reality-island full of mystery and surprise. In other words, learn to observe.

- If all you can know is your own brain programs operating, the whole universe you experience is inside your head. Try to hold onto that model for at least an hour. Note how often you relapse into feeling the universe as outside you.

- Try living a whole week with the program, "Everybody likes me and tries to help me achieve my goals."

- Try living a day with the program "I am God playing at being a human being. I created every reality I notice."

- Try living forever with the metaprogram, "Everything works out more perfectly than I plan it."

Amen to R.A. and the Redeeming Beauty of Baseball

We're almost midway through the 2012 baseball season and ever so slowly some things are starting to become clear. We know the Yankees are once again a dominant force. The Padres are a complete abject disaster. The AL Central is up for grabs. Rookies Bryce Harper and Mike Trout are really good.

And R.A. Dickey is among the best pitchers in baseball. 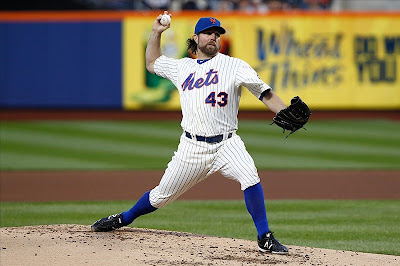 That last one is the hardest to believe. For one thing, Dickey got knocked around by the Yankees last night. He's also a 37-year-old knuckeballer, which is something of a sideshow in the game of baseball. And yet earlier this year he became the first National League pitcher since 1944 to throw two consecutive one-hitters. His dominance reached the point of 44 and 2/3 straight innings without giving up an earned run until the Yankees finally got to him last night.

But even after surrendering five runs last night, he's still 7th-best in the league at keeping runs off the board. He leads the NL in shutouts, wins, and his tied for the lead in pitcher's WAR (Wins Above Replacement). Most incredibly, he's got the third most strikeouts of any pitcher in the NL and he's by far the oldest guy in the top 10 of that category.

Read Before the Electronic Ink Evaporates: Illustrated Joyce (and some Dali too)

Despite it being far too hot in Austin right now to do anything, including type on a computer, I have a few too many things that have been waiting in the queue and now's the time to share them.

First up is a post over at the website Brain Pickings that shares images from the special edition of Ulysses for which Henri Matisse provided illustrations in the 1930s. An American publisher had commissioned Matisse to provide some artwork for the text for $5,000 and Matisse came up with 26 full page drawings.

While the combo of Matisse and Joyce certainly sounds intriguing, I'm not particularly enamored of the result and neither was Joyce. The problem is that Matisse didn't bother to read Ulysses and instead drew up scenes from Homer's Odyssey.

I do really like the cover (shown on right) but the rest of it is unexciting.

In the mid-1930s when the Matisse-illustrated edition of the book was being put together, Joyce was hard at work finishing up writing Finnegans Wake which he been laboring on for almost 15 years. Fragments of the Wake (known as Work in Progress at that point since he kept the title secret until completion) had been appearing in magazines and even in individual book form during this time. Joyce encouraged his mentally unstable but artistically brilliant daughter Lucia to take a crack at making her own illustrations for one of the chapters of his enigmatic work and the results were actually quite good. Joyce much preferred her illustrations to the ones by Matisse and you can see why.

16 Reasons Why James Joyce is the Greatest Writer Ever

This was originally posted last summer. Today being Bloomsday, I figured it was a good time to post it once more.


1. The simple fact that his writing is beautiful
All good writing strives towards poetry as poetry is the highest form of writing. Joyce started off as a poet and was good enough to receive attention from W.B. Yeats who encouraged Joyce to "turn his mind to unknown arts." This unknown art is a manner of prose in which every word and the flow of the words are considered with precise poetical precision. So Joyce's writing is an original, beautiful gleaming mass that yields gems like this one:

The heaventree of stars hung with humid nightblue fruit.

2. Joyce is to literature what Einstein is to science
In Ulysses Joyce toys with time and space all throughout the book. In the "Proteus" chapter, Stephen Dedalus ruminates and meditates on the nature of Time and Space using Schopenhauer's interesting words Nacheinander (German for "succeeding each other") and Nebeneinander ("beside each other"). The main character Leopold Bloom sells newspaper advertisement space for temporary periods of time. In Richard Ellman's complex exegesis, Ulysses on the Liffey, he argues convincingly that the 18 episodes can be broken into six triads within which the dominant categories of Space, Time, and Space-Time repeat over and over. Relativity (or more specifically what Einstein called "special relativity") also dominates the book, especially in the first six chapters as we follow the movements and thoughts of two different, separate characters at the exact same time of day. Relativity abounds in Bloom's cosmic reflections in the Ithaca episode. Also, Don Gifford's Ulysses Annotated explains how Joyce stretches out time by depicting the events of the day through a "rich mix of clock time, psychological time, and mnemonic time."


We are all aware, for example, that we can think and perceive far more in the course of a few minutes of multi-leveled consciousness than we could spell out in words in as many hours. Joyce variously explores this disparity. (Gifford, pg 3)

Email ThisBlogThis!Share to TwitterShare to FacebookShare to Pinterest
Labels: A Portrait of the Artist as a Young Man, books, Finnegans Wake, James Joyce, literature, ulysses

To Clear the Tension in My Atmosphere, Part 2

Let us come back to our friend, the hairy guy who acts as a flimsy connecting thread in this little story, Mr. Jorn Barger.

Barger, creator of the term "weblog" and one of the earliest bloggers, as we have seen, maintained a website loaded with material on James Joyce, artificial intelligence, and more. Among his many impressive and worthwhile assemblages of material is a massive collection of quotes about Love gathered from the words of poets, writers, philosophers, musicians, royal figures, and others throughout the history of man.

The collection is entitled Solace: a textbook of romantic psychology and it is organized according to the stages love usually unfolds in, from "Seeking" and "Courting" down to "Trying" and "Fading" until either the love has dried up or one of the lovers passes away.

Having gone through the experience of a long-term relationship suddenly coming to an end, I've found that this collection does indeed provide "Solace" for the reader. As the "textbook of romantic psychology" states in its opening:

And so I would like to now, for one last bit of blogspace, gather some quotes from Barger's very useful textbook about the experience of love's fading. This blog was, after all, originally begun out of the insistence of my ex-girlfriend who always acted as a supporter and muse for all of my writing. I feel I must give our relationship a proper sendoff before my heart paves a new road.

To Clear the Tension in My Atmosphere, Part 1

An abundantly hirsute, wizard-like, quirky-looking gentleman named Jorn Barger is the person responsible for originally coining the term "weblog" in the 1990s. I know this only because Barger, one of the web's original bloggers if not the original blogger, also has a reputation for having written heaps of enlightening material on James Joyce at his early weblog "Robot Wisdom."

Navigating through the many dead links one might expect to encounter on a site that hasn't been updated since 1999, you'll find a vast amount of material including original (sometimes groundbreaking) analysis and exegesis of virtually all of Joyce's work.

But that's not all Barger ever wrote about and this post is not about James Joyce. This is about life's propensity to ricochet experience into unforeseen directions. See, my girlfriend and I have decided to call it quits after three mostly wonderful years (living together for much of that time) and these last few days have been painful ones for me but the experience of prolonged sadness has led to a number of interesting experiences.

So I'd like to take a Jorn Barger-inspired trek through all of that right now.