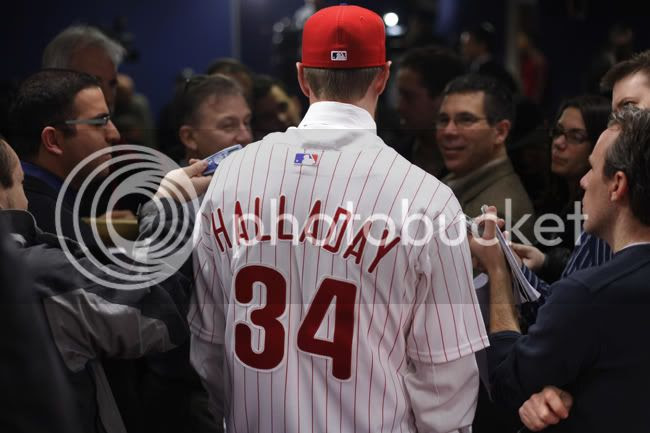 NL East
Found a cool article over at Baseball Analysts showing the spread of different statistical forecasting systems and how they predict each division to play out. My assessment of the National League East  is right along the lines of what the forecasting systems predict.

1. Phillies
PECOTA: 90-72
My take: Over
They won 93 games and the National League pennant last year playing with a bad bullpen and a so-so starting rotation. And, according to Baseball Prospectus' WARP (Wins Above Replacement Player) stat, Jimmy Rollins was less than half as valuable as he was in 2008 (2.5 wins down from 5.9 the year before). PECOTA forecasts a bounce back season from Rollins (a .284/.342/.467 batting line) and they have upgraded their only real glaring offensive hole at thirdbase, signing Placido Polanco to replace punchless Pedro Feliz. They didn't have Cliff Lee for a full season last year but now they'll have an even better pitcher, possibly the best pitcher in baseball, Roy Halladay presumably for the whole season (pending an injury of course but he's been extremely durable). With Halladay and another bounce-back candidate in Cole Hamels (horrible luck last season) atop a rotation that also features stalwart moundsman Joe Blanton and lefty J.A. Happ, they should be able to match-up with just about anybody. The bullpen was a nightmare last season but it's hard to imagine they'll keep letting Brad Lidge take the ball in the 9th inning if he continues to suck. In the end, I see them matching last year's 93 wins and returning to the NL Championship. And they just might face these guys:

2. Braves
PECOTA: 86-76
My take: Over
I've thought about this team alot lately. They're a popular pick to dethrone the Phillies and deliver Bobby Cox a division title in his final season in the dugout and the more I read about this team, ponder them, and look over their projections, the more I like them. First off, they had terrific pitching last year. By FIP or Fielding-Independent Pitching (a stat that filters out the defense's contribution to pitching performance) they were the best team in all of baseball. They traded away Javier Vazquez who was great for them last year but the rotation is still loaded. Jair Jurrjens (what a wonderful name) has established himself as an ace and they'll have a full season of Tommy Hanson, their best pitching prospect whom PECOTA projects to have a 3.39 ERA in 192 innings this year. They lost some important bullpen contributors in Mike Gonzalez and Rafael Soriano but their replacements (Billy Wagner and Takashi Saito) should step in ably and they still have the bespectacled submariner from down under, Peter Moylan.
The lineup doesn't seem to have any weaknesses (unless Troy Glaus gets hurt or doesn't hit), Baseball Prospectus' #2 prospect Jason Heyward is stepping into the mix this year at age 20, and they've even got a nice-looking bench. Because of all that, they are my pick for the NL Wild Card and I know they will provide many exciting games playing against the Phils who won't relinquish their crown without a fight. I'll say: Phillies 93 wins, Braves 92.

3. Marlins
PECOTA: 80-82
My take: Over
I guess it's about time I divulge my rooting interests. Well, it's complicated. I've already mentioned my proximity to the place where the Padres play their baseball games and I do like to see them succeed. At heart I'm a Mets fan but I also consider myself a serious fan of the Oakland Athletics (mainly because of Billy Beane) and I root for the Red Sox as well as the Padres. The pattern (aside from the Mets) is an interest in the teams that highly value sabermetrics and objective analysis and use that as a main tool in team planning and game strategy. The Marlins do not have a reputation for relying or emphasizing statistics in their evaluations of players and decision-making but, as a team with a cheap douchebag owner that often has to let its expensive star players leave (Miguel Cabrera, Dontrelle Willis, AJ Burnett), playing in a football stadium where nobody comes to see their games, they nevertheless seem to stay in the mix every single year. I find it hard not to like them because, despite their disadvantages, the people in the front office seem to know what they're doing. 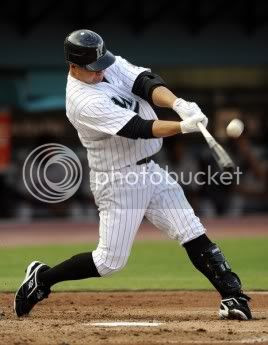 They feature perhaps the most exciting player in baseball in Hanley Ramirez as well as a few sluggers in Dan Uggla, Jorge Cantu, and Cody Ross (a 5-foot-9 extremely rare lefty-throwing/righty-hitting outfielder whose main strength is his popgun homerun swing) in a what could be a pretty strong lineup with sophomore sensation Chris Coghlan leading off. They scored 4.95 runs per game when he batted leadoff last year (106 games)--a rate that would've been 3rd in the NL if he'd been penciled in there all year. The rotation is led by two 27-year-olds coming into their prime: certified ace Josh Johnson and the extremely underrated Ricky Nolasco. Nolasco had a fluky year last year, he struck out 195 while only walking 44 (only two NL pitchers had a better ratio) but ended up with a 5.06 ERA and had to spend some time in the minors to collect himself. I expect him to have a huge year in 2010 and help lead the Marlins to be a factor in the annual late-season Wild Card chase, falling short to stronger teams like the Braves and Rockies in the end. 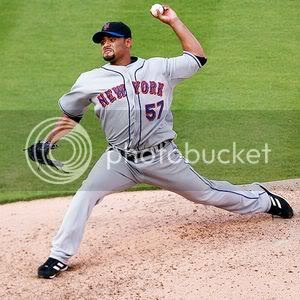 Ah, the Mets. The team of my youth, the team I used to go see at Shea Stadium a dozen times a year back when things looked promising for their future. Now they're once again a laughingstock. As indicated in Baseball Prospectus 2010, they spent $43 million dollars (35% of their payroll!) on players who sat out with injuries last season. They're already starting off this season next week with their starting centerfielder, shortstop, and firstbaseman all on the shelf and even with those guys in the lineup they're not projected to do well anyway because of a terrible pitching staff. It's pretty sad, although such a state of crapitude seems to be the overlying theme for the Mets in their history. Steve Phillips then Jim Duquette. Now, Omar Minaya has brought us here. Where are we? Well, some scattered remains of a once-hopeful contender can be seen in the rubbish: an ace (Johan Santana), a duo of young superstars (Wright and Reyes), a highly-paid Hall of Fame centerfielder (Carlos Beltran), some prospects-turned-projects (John Maine, Oliver Perez, Mike Pelfrey). Throw in Jason Bay to knock in a few runs and this might be a playoff contender, but half or all of those guys might get hurt and perpetuate the New York City tabloid circus. I'm with PECOTA, although it wouldn't surprise me to see them around the 80-82 record CHONE predicts for them. With some luck they'll be in the playoff mix but I imagine the baseball gods will avoid coming anywhere near this dung heap.

5. Nationals
PECOTA: 74-88
My take: Even
They're inching closer toward respectability. They only won 59 games last year but their run totals suggested they were closer to a 70-win team and such huge discrepancies don't tend to carry over from one year to the next. The Nats are led by a legitimately good offense with Adam Dunn and Ryan Zimmerman both good for 30+ homeruns and Josh Willingham offering solid production. But it just about ends there. Their pitching is absolutely putrid. They tried 30 different pitchers last year and gave up 56 more runs than any other team in the NL. Aside from Mound Messiah Stephen Strasburg who should be playing for them at some point this season, their only bright spot is supposed to be John Lannan, the guy who struck out fewer batters per 9 innings than any other qualified pitcher last year (162 innings needed to qualify).
Their offense will win them some games before the Strasburg Era officially begins and then it's all chaos from there.
Posted by PQ at 9:16 PM