To paraphrase the opening lines of the "Scylla and Charybdis" episode of Ulysses, this is "a great writer on a great brother writer." The great English scribe, Anthony Burgess, famous for his novel A Clockwork Orange, here waxes lucidly and passionately on the works of James Joyce. This is perhaps the best and most fun-to-read book of Joyce criticism that's out there, it's highly acclaimed but I'm going to offer my own thoughts on this wonderful book which I recently completed and am now jumping back into for a second go-round. 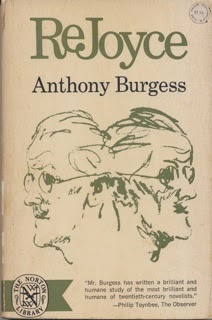 My copy is an older one, published in 1968, and it has a different cover than that which I show here but I couldn't find a good image of the older cover anywhere on the web. It has a cool sketch of two Joyce heads stuck together like Siamese twins (here's a tiny look at it, all I could find--EDIT: see two-headed cover courtesy of Eric Arbiter). Originally published in 1965 in Britain under the titleHere Comes Everybody: An Introduction to James Joyce for the Ordinary Reader, the American version was shortened to the much more pleasing title ReJoyce. Both titles are definitely apt, as Burgess' love and enthusiasm for Joyce's art glows on each page as he celebrates the author's entire canon from his early poetry to detailed walkthroughs of his major works, especially the two biggies, and in so doing he explains very clearly why these works are so important and what makes them so special. Burgess displays a passion in trying to make Joyce accessible and to dispel the cloud of heavy erudition that surrounds his books. In the foreword, Burgess explains the reason for the British edition's title Here Comes Everybody which is taken from Finnegans Wake, but he also wanted "to stress the universality of Joyce's creations" and enclosed in that title is Burgess' "hope that it will not be long before everybody comes to Joyce, seeing in him not torturous puzzles, dirt, and jesuitry gone mad, but great comedy, large humanity, and [the] affirmation of man's worth."

The book contains three parts: The Stones, The Labyrinth, and The Man-Made Mountain. In the first part, Burgess examines Joyce's early career, some of his early poems, and walks us briefly but concisely through each story of Dubliners but the main focus of The Stones is the 'flight' of Stephen Dedalus in A Portrait of the Artist as a Young Man. The symbolic name for the main character in Joyce's autobiographical Bildungsroman novel combines the great artificer of Greek mythology, Daedalus, with Saint Stephen, the first Christian martyr. Saint Stephen was stoned to death but, metaphorically speaking, Joyce (whom Stephen represents) took those stones and eventually constructed a Daedalian labyrinth in Ulysses and so, in part two, Burgess offers us an easy-to-read, thorough and interesting walkthrough of the longest day in literature. The part of the book (pgs 137-141) where Burgess explains the "Sirens" episode of Ulysses is probably the best explication of this difficult chapter I've yet across, here's a sample where he sheds light on the musical techniques Joyce used:

We distangle [Bloom] from a mass of musical tricks--a tremolo, for instance: "Her wavyavyeavyheavyeavyevyevy hair un comb:'d"; a staccato triplet: "I. Want. You."; hollow fifths: "Blmstdp"--in which the vowels are missing ("Bloom stood up") on the analogy of suppressed thirds in common chords. We have recapitulations, ornamented cadences, appoggiaturas, but above everything we have an exploitation of the musical possibilities of sheer sound..."

So, Joyce has obviously gone to great lengths in this chapter to include a bunch of musical elements in his prose---with all of the techniques Burgess points out there's also the fact that the entire chapter is in the form of musical fugue---but there's a reason for all of this:


Does the virtuoso display obscure this latest phase of the story? No, since the essence of the whole book is Bloom and his qualifications for the spiritual fatherhood of a poet, and we must meet Bloom's inner world at all its levels. Every fresh stimulus brings to the surface a new aspect of the man, and music---in a city passionately devoted to it---is a stimulus of considerable potency.


Burgess' walking us through the entirety of Ulysses feels like a relaxed, pleasant and informative conversation during an early evening after-dinner stroll. He is obviously passionate about the subject, but also engaging in his quest to make it all seem appealing and help us see the greatness in this famously difficult book (it wasn't voted Best Novel of the 20th Century for nothing):


The difficulties of Ulysses...are not so many tricks and puzzles and deliberate obscurities to be hacked at like jungle lianas: they represent those elements which surround the immediate simplicities of human society; they stand for history, myth, and the cosmos. Thus we have not merely to accept them but to regard them as integral, just as the stars overhead are integral to the life of the man who, micturating in the open air, happens to look up at them.

Micturating is a fancy word for peeing and he's making reference to the scene in the "Ithaca" episode where Stephen and Bloom piss in Bloom's backyard underneath "the heaventree of stars hung with humid nightblue fruit."

The third and final section of the book, The Man-Made Mountain, is a walkthrough of Finnegans Wake. There are few things, if any, that I find more interesting and stimulating than reading about Finnegans Wake because it quickly becomes apparent that it is the greatest human achievement in words ever. It is generally regarded as the most difficult book to read but Columbia professor William York Tindall has called it "the funniest book of all time and the dirtiest book of all time." Burgess' look at the wonderful dream text is, again, a clear and concise one. He never goes to absurd scholarly lengths to break down the unbelievable amount of references in Wake sentences and words but he often will unravel the beauty of a sentence here and there. His main approach is to try to explain to us what is "going on" (in quotes because, since the entire book is a dream, and thus not in line with the laws of time and space, it's hard to speak in such terms) in each chapter of the book so as to help us read it and savor the words without having to worry so much about unveiling who is doing what.

Overall, this is a wonderful book which I'll probably read again more than once and I highly recommend it to anyone even remotely interested in Joyce. I've read a number of Joyce books and criticisms the past year or so and this is unlike all of them in that, while not omitting any of the scholarly Joyce stuff, Burgess' book is easy to read and accessible. It also is not littered with footnotes and page references (he doesn't notate the page number on any quotes)---it is just simply a great writer waxing eloquently about perhaps the greatest writer. It is not sheer hero-worship, though. As I've said, Burgess sought to explain the beauty of Joyce and why he should be read. By regular people too, not just professors and polymaths, after all "Joyce's aim was the ennoblement of the common man." And what becomes most rewarding, as any reader of Joyce will tell you, is how his art seeps into your views of everyday life and, in so doing, adds a transfiguring depth to it:


Joyce, without blasphemy, saw his function as priestlike---the solemnisation of drab days and the sanctification of the ordinary.