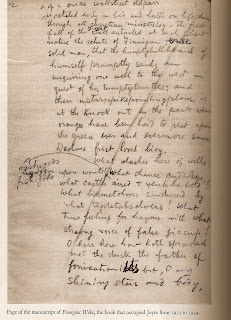 After 30 years of combing the 60 notebooks, 20,000 manuscript pages, and nearly uncountable notes and papers Joyce used to create the mountainous masterpiece, two scholars have recently completed a fully-corrected and supposedly easier-to-read edition of Finnegans Wake. They spent about twenty years combing all of Joyce's papers which were hand-written and looked much like the page shown above (a manuscript page of the Wake) and then the last ten years typesetting the pages. Apparently, they've made 9,000 "minor yet crucial" corrections to the text. This new edition will be published next week in two limited edition versions: a standard one for 250 British pounds (about $375) and a calfskin-bound special version for 750 pounds (about $1,125). Next year, Penguin will release a paperback version of the new edition for a much more affordable price (probably about 35 bucks).

Finnegans Wake was originally published in 1939 with many typos and minor mistakes which should not come as a surprise since it is written entirely in a "dream language" that Joyce created and spans over 600 pages. Joyce finished composing the book on November 13, 1938 after laboring on it for nearly 17 years and then for the next month and a half, Joyce, with help from his friends Stuart Gilbert and Paul Léon and some professional proofreaders, frantically worked around the clock to proofread the book as Joyce insisted that it be printed by his birthday (February 2nd) no matter what. During this time, Joyce barely slept at all and once collapsed during a walk in Paris. In his famous Joyce biography, Richard Ellman tells another story from this "frenzy of proofreading":


Léon supplied a last drama by forgetting a section of the revised proofs in a taxi. He rushed back to stop the driver, but the taxi was gone. Bitterly ashamed, he hurried to Joyce's flat to inform him; Joyce did not reproach him, seemed rather to take it as the usual sort of bad luck. Léon telephoned to London to send more proofs, but the taxi driver, after two hours, miraculously appeared with the missing package. (Ellman, pg 714)

Joyce received a printed copy of the book from his publishers, Faber & Faber, on January 30th and for his birthday party on February 2nd, he celebrated the culmination of his years of work with friends and family. Paris' best caterer baked seven cakes, each one a replica of Joyce's seven books, with icing the color of the books' bindings. At the dinner celebration, Joyce told the guests how the idea for the book came to him in 1922 when he was at Nice in France and, after dinner, Joyce and his son sang a duet and his son's wife read aloud the last pages of Finnegans Wake.
Posted by PQ at 6:52 PM