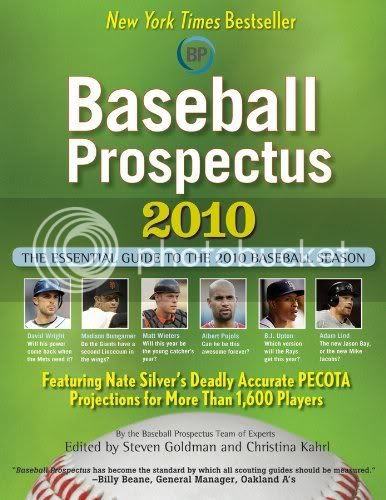 The annual Baseball Prospectus book is an enormous mango that arrives at my door each year around Valentine's Day. This huge piece of fruit maintains its freshness throughout the baseball season and one can either devour it in huge luscious chunks or savor its sweetness in carefully chosen slices. No matter what, it's always delicious, nutritious, and refreshing.

The big softcover book signals the arrival of Spring and the baseball season. As Spring Training continues and Opening Day inches closer, I've been spending more and more of my time reading this and preparing giddily for the new season. Written by a diverse conglomerate of baseball experts (14 contributors in all according to the author page), the book features a comprehensive chapter for all 30 major league teams, each chapter containing a three- or four-page essay (my favorite part of the book) discussing what happened last year and what their chances are in the year to come and then for all the players in each organization there's a capsule displaying their performance over the last three seasons in stats including Baseball Prospectus' own statistics which translate a player's performance in such a way that what a guy did in the New York-Penn League (a low-level short-season minor league) can be compared apples-to-apples with the stats of a major leaguer. These numbers put all players on even footing, filtering out any advantages they may have gained from factors such as playing most of their games in a homerun-friendly ballpark or in an extremely difficult league. An example of these translated stats, Yankee farmhand Neil Medchill led the aforementioned NY-Penn League in slugging-percentage last season with .551 playing for the Staten Island Yankees but, had he been playing in the majors, that performance would translate to a slugging percentage of only .387.

The book also displays, for each player, BP's special stats like EqA and WARP which I discussed recently but the main feature of the book is its statistical projections showing us what kind of season we can expect from each player in the upcoming year. These projections are generated by BP's forecast system called PECOTA (short for, get ready...Player Empirical Comparison and Optimization Test Algorithm) and tell us things like:

-Prince Fielder will smack 51 homers this year and draw 101 walks while being worth 7.1 wins for his team
-Tim Lincecum will strike out 219 batters
-Albert Pujols will have another awesome season at .317/.427/.564 for AVG/OBP/SLG
-Javier Vazquez, in his return to New York, will have a solid year with a 3.85 ERA and 180 strikeouts

That's basically the foundation of the book, but all the stats and figures do not come close to making the huge book a boring reference source or baseball math textbook. What I love about it most is the writing. This is my seventh or eighth year of purchasing the book (unsure of the number because my early editions are in New York, I'm in California) and it is as good as ever. I've particularly loved the White Sox, Mariners, and Mets chapter thus far although I've only read 10 of the 30 chapters because I employ a pretty conservative system of consuming the enormous mango. I'm not going to read the essays for the Yankees and Red Sox until their season-opening game gets closer (the night of Sunday April 5th).

The writing overall is intelligent, witty, loaded with cultural references (I've already come across two that caught my eye since they're main aspects of Ulysses: synchronicity and leitmotif), and particularly incisive. I'm often amazed at how perfectly they've described or captured the characteristics and workings of a team in the essays like this from the White Sox chapter:


In a sports world virtually wallpapered over in gray, polite men chiseling away at fractions of value and mouthing the easy assertions of sensible asset management, the Sox gamble at a chance for something more. In this age of paralysis by analysis and prim, perfunctory press conferences, bless them for their daring.

And BP has a reputation, in the mini-essays under the capsule for each individual player (of which there are over 1,600 helping make the book such a sweet inexhaustible mango), to pack lots of jokes, snark, and funny analogies as well as the everpresent sharp baseball analysis. A few of my favorites so far:
-re: Twins' pitcher Kevin Slowey: "In an organization that collects finesse pitchers as if they'll be used as currency following the apocalypse, Slowey is a high-denomination bill among the singles..."
-on Yanks outfielder Nick Swisher's defense: "he's competent but will drop the occasional can of corn because feelings of inadequacy clouded his vision."

-Arizona pitcher Clay Zavada is described as "the recipient of the 2009 Robert Goulet Memorial Mustachioed American of the Year Award."
-from Orland Cabrera's player comment: "They dealt him to Minnesota, which actually was contending, thanks to the AL Central's being to playoff possibilites what MADtv's 'Lowered Expectations' skit is to dating." (When the opening to that old skit rose up in my memory I broke out in laughter.)

A few other morsels:
-PECOTA forecasts a huge dropoff for Derek Jeter this year, with a loss of over 100 points in his OPS (On-base plus slugging) from .871 to .760.
-the Yankees have an amazing 20-year-old catching prospect in their system named Jesus Montero. In Kevin Goldstein's Top 101 Prospects List in the back of the book, the young catcher is #4 in all of baseball and Goldstein notes: "In terms of pure hitting ability, no prospect matches Montero." Scary for Yankee-haters.
-The #1 overall prospect on BP's list is Nationals pitcher Stephen Strasburg: "Not just the best college pitcher in the 2009 draft, maybe the best college pitcher in baseball history. His combination of top-of-the-line velocity and command is found once in a generation, if that...Only an injury or a meteor strike will prevent him from being a perennial Cy Young contender."
-I'm happy to see that David Wright is predicted to be his normal ball-mashing self again next season, forecasted to hit 26 homeruns with a 508 SLG and finish as the most valuable third basemen in the league next year (ahead of A-Rod and Evan Longoria of whom BP gushes, "he's all that and a bag of chips").

The one negative feature which I must point out is the same problem the book has had for about 4 or 5 years now: it's seemingly littered with typos, although it is a bit better than years past in that regard. Considering that there's a frantic rush each year to get the completed book into print as they try and include every last ounce of offseason baseball news before distributing to the hungry fans, it is a bit understandable but nevertheless frustrating. They are often minuscule but sometimes, like referring to Padres' righty pitcher Edward Mujica as a lefthander twice in the same chapter, they are bit more glaring (for a baseball maniac like me, that is). After all, this is considered the premium publication in what is now a growing industry. Such tiny proofreading errors certainly don't subtract from the awesomeness of the book, though. They are insignificant little blotches on a nutritious, fresh, deliciously satisfying piece of fruit.
Posted by PQ at 9:00 PM