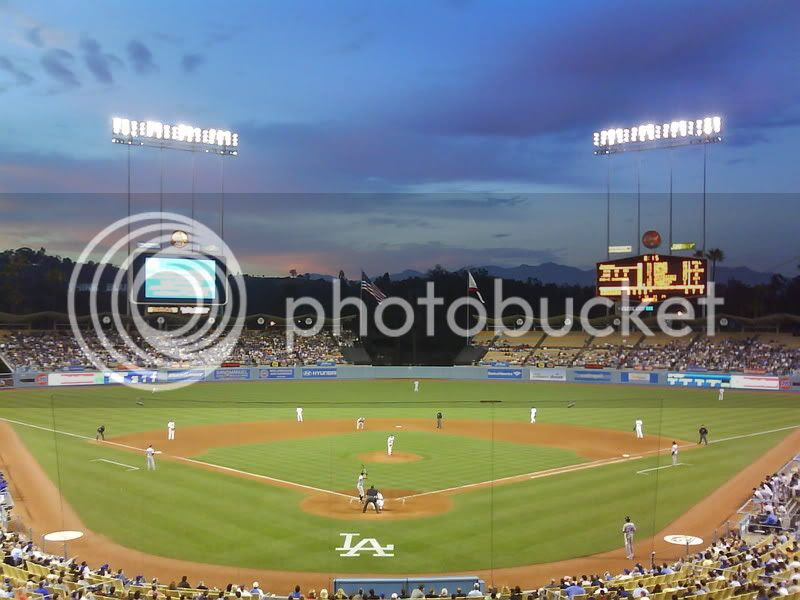 Throughout the week, as we approach Opening Day I will be posting my preview for the 2010 baseball season. I will be covering each of the six divisions, starting off with the NL West and moving eastward.

For each team I've included their projected 2010 record as predicted by Baseball Prospectus' PECOTA system. The system determines playing time for all players on each team, derives Runs Scored and Runs Allowed totals from their 2010 forecasts, and extrapolates that into wins and losses. We'll be using the PECOTA record as a baseline and I'll offer my take on each team's chances and how they'll all stack up.

NL West
A division that used to be an afterthought, a joke, an easy bet to be the worst division in baseball suddenly became the best division in the National League last year (.533 win% playing against the other divisions). The western chapter of the senior circuit is overflowing with young talent and, as players like Matt Kemp and Tim Lincecum continue to build on the levels of performance they've established, the NL West should continue to be a division of supreme quality baseball.

The Rockies and Dodgers have both established themselves as playoff contenders and it'll be fun to watch them duke it out for the division crown this year. I think it'll be a very close finish with the Dodgers finishing ahead by a hair, though, because even though they've lost some players from their big 2009 season and didn't add on much, they are still absolutely loaded with talent at the plate and on the mound.


1. Dodgers
PECOTA's projection: 82-80
My take: Over
The 1-2 pitching punch of Clayton Kershaw and Chad Billingsley might be a tougher duo than their rivals Tim Lincecum-Matt Cain and a bullpen that was the best in baseball last year returns almost all of its contributors. On offense, the Manny-Kemp-Ethier combo will carry them again and I'm optimistic about Russell Martin (no where to go but up after last year), and James Loney who had a great postseason last year.

Their main problem is depth. If someone gets hurt they don't have anybody to plug a hole (Xavier Paul?) and they are actually entrusting Vicente Padilla to provide quality starting pitching for them. It's gonna be a tough season, I certainly don't envision them sitting up in first place all summer but in the end their core will lead them ahead of the Rockies' oncoming avalanche. They won 95 games last year when they were good enough to win 99 but I'll take the Over on PECOTA's 82-win prediction and peg them for about 90.


2. Rockies
PECOTA's projection: 86-76
My take: Over
One of the league's most exciting young teams right now they ought to really give the Dodgers a hard time. I expect Carlos Gonzalez and Dexter Fowler to continue to take steps forward and excel, Troy Tulowitzki is a monster, and Ubaldo Jimenez will be one of the top 10 pitchers in the league especially with their strong defense backing him up.

I peg them for 88 wins, a bit of a drop from last season's 92 attributable to the fact that this will be a really strong division this year. Last season it was basically the Rockies and Dodgers with the Giants tagging along but not really being able to hang with the big boys because of their puny offense. Everybody (yes, even the Padres, see below) should be pretty competitive this season and I think that'll drag the records of the Rockies and Dodgers down. Still a battle between those two for the top of the mountain but the mountain isn't quite as steep this time.

3. Diamondbacks
PECOTA's projection: 83-79
My take: Even
Alot of people like this team as a darkhorse contender and there's certainly alot to like about them. They've got Justin Upton for one. Mark Reynolds is young and blasted 44 homers last year. Conor Jackson, Chris Young, Stephen Drew, Miguel Montero and even Kelly Johnson can all hit. I like their rotation alot this year, Brandon Webb and Dan Haren can pitch with the best of them and the two youngsters they picked up in the offseason, Edwin Jackson and Ian Kennedy, ought to be relieved to discover that there's only 8 good hitters to face every night in the National League.

But the D'backs have looked good on paper for a few years now and they've been disastrous. Sure, if everything clicks (all those names perform at high levels) they can be a great team, certainly a playoff contender, but how often does everything break right for a team? The guy who's out there telling everybody what to do, manager A.J. Hinch, hasn't managed a baseball team (any team) for even one year. He's got a psychology degree, though. In a highly competitive division, I see them being just that: competitive. "On paper" their roster can probably match up with the Dodgers and Rockies but I don't think the D'backs will be able to hang with them all year. They'll certainly contribute to what will be a tight race for this division, though.

4. Padres
PECOTA's projection: 73-89
My take: Over
This will probably be the most daring prediction I come up with. The Padres are supposed to be absolutely terrible this year according to most analysts and predictive systems. BP has them finishing with 73 wins, the CHONE projection system says 78 wins but I peg them at about 80. Why? Because, crazy as it may sound, I think they have a solid lineup (and good enough pitching). Their main offensive hole is David Eckstein at secondbase but if he plays bad enough maybe Matt Antonelli will supplant him, finally. They've got a surprisingly strong middle of the order in Adrian Gonzalez, Kyle Blanks (who I'm really excited about), and Chase Headley. I expect good things from Headley who had a solid-but-unspectacular season last year with a .280 EqA, he's only 26 and he's moving back to original position at thirdbase after trying out left field for a couple seasons. Twenty-seven year-old Will Venable put up a .285 EqA last year and will get a chance to shine this season as the starting rightfielder and they've got Scott Hairston back in the mix, a guy who managed to slug .533 playing in the worst hitter's park in baseball last year (before he was traded, that is).

The pitching is nothing spectacular but Mat Latos is pretty damn good already and he's only 22. The rest of the rotation: Chris Young is helpful if healthy (last time he managed a full season he had a 3.12 ERA), Kevin Correia doesn't impress me but does eat up innings, same with Jon Garland, and Clayton Richard has some upside as a young lefty who throws hard but I'd like to see Tim Stauffer and Wade LeBlanc get some starts. The Pads have also assembled an impressive pen. It adds up to a .500-ish season that'll keep San Diego fans happy and hopefully (fingers crossed) Adrian Gonzalez in his hometown. (In the interest of full disclosure I should note that I currently live about 10 minutes away from Petco Park and developed a slight rooting interest in this team.)

5. Giants
PECOTA's projection: 81-81
My take: Under
Yes, their topline pitching is amazing. But the offense is as bad as the pitching is good. And as horrible as their hitters were last year, they were lucky to have even scored as many runs as they did according to the Giants' chapter in this year's BP annual. A regression is expected for an offense that was 13th in scoring in the National League last year. The strong rotation and bullpen won't make up for that.

They will be fun to watch, though, with Tim Lincecum and Pablo Sandoval leading the way and I also enjoy following the machinations of a manager like Bruce Bochy trying to mix & match and move players around in his lineup in an attempt to ignite some slight little spark with his poorly equipped charges. I see them finishing a few games below .500 with their badly unbalanced approach of all-pitching, no-hitting catching up with them after their 88-win breakthrough last season (their run totals suggest they were actually about an 83-win team). In what should be a battle to avoid the bottom of the barrel, the Giants will finish below the Pads.
Posted by PQ at 7:16 PM