Cassiopeia and Tycho's Star in Ulysses

One of the websites I visit regularly is NASA's Astronomy Picture of the Day page. Last week this magnificent image of the so-called Heart Nebula appeared:

It was noted that the Heart Nebula appears in the constellation Cassiopeia, a name which immediately rung a bell as it recurs in the thought streams of the two main characters in Ulysses: "delta of Cassiopeia." While that phrase has occasionally echoed in the back of my mind the last few years, I never took the liberty to find out what exactly it means and why it pops up a few times in Ulysses. I frequently find that, when dealing with the art of James Joyce, there's always a reason for the recurrent phrases. They always mean something if not multiple things. Every microcosmic grain, when closely examined, tends to open up a new world.

So, let's take a look at that melodiously named constellation "Cassiopeia" as it occurs in Ulysses and see what it all means.

The first occurrence of the phrase is in chapter 3 (the episode known as Proteus) where Stephen strolls along the beach in deep philosophical rumination. It's daytime and he's pondering the stars:


Darkly they are there behind this light, darkness shining in the brightness, delta of Cassiopeia, worlds. (Ulysses, p. 48)

Later on in chapter 9, where Stephen outlines his unique theory about Shakespeare to some listeners in the library, the phrase pops up again and it's clearly got something to do with Shakespeare:


A star, a daystar, a firedrake rose at his birth. It shone by day in the heavens, brighter than Venus in the night, and by night it shone over delta in Cassiopeia, the recumbent constellation which is the signature of his initial among the stars. (p. 210)

On November 11th, 1572 (when William Shakespeare was 8 years old), a new star suddenly appeared in the night sky just above the constellation Cassiopeia. This would be one of the most imporant events in the history of astronomy as it changed the prevailing views of the universe.

While this bright new star was noticed with amazement by astronomers and sky-watchers throughout the world, credit for its discovery was given to Danish astronomer Tycho Brahe (1564-1601). This new star was dubbed "Tycho's Star" based on a book of observations and analysis he published immediately afterward entitled "Concerning the Star, new and never before seen in the life or memory of anyone." But it wasn't a new star, it was a supernova (in other words, an old star that had exploded), one of only 8 supernova events witnessed in recorded history.

The supernova brightened rapidly until it outshone all the other stars and planets in the night sky and was even visible to the naked eye in the daytime. Imagine that. This is what's going through Stephen's mind in these two quotes. The exceedingly bright supernova remained totally visible to the naked eye (in the daytime!) for about 16 months and caused "considerable imaginative excitement in Elizabethan England" where it was seen "as a sort of Star of Bethlehem, heralding a new birth, the second coming of Christ" (quoting from Don Gifford's Ulysses Annotated). This was all going on while William Shakespeare was between the ages of 8 and 10, so Joyce is making an astrological connection between this unprecedented stellar explosion and the growth of young Shakespeare. 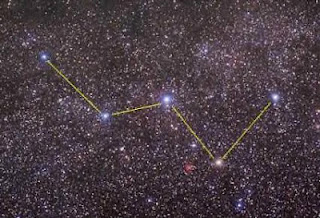 As William York Tindall explains, Joyce is also linking himself with Shakespeare (as he is prone to do). The constellation Cassiopeia is a simple "W" shape which is, as Stephen says, "the signature of his [William's] initial among the stars." But he describes it as "the recumbent constellation" which implies that "W" shape is actually lying down. In that case, if the recumbent "W" were standing up it would look like the Greek letter Σ known as Sigma which represents the "S" sound.

Much later on in the book, in the purposely dry and humorously overscientific chapter "Ithaca" (which is meant to zoom out into the deepest reaches of space to view the two main characters as astronomical objects), we get two more mentions of Cassiopeia, this time by the other character Bloom.

In opposition to the young poet Stephen, the older Bloom is scientific-minded and very interested in the stars. At this point in the book, it's very late at night, and the two characters step outside into Bloom's backyard to take a piss and then head off in their separate ways. When they go outside they're greeted by the glorious glowing infinitudes of space, setting off a few pages of beautiful cosmic reflections starting with one of my favorite quotes:


What spectacle confronted them when they, first the host, then the guest, emerged silently, doubly dark, from obscurity by a passage from the rere of the house into the penumbra of the garden?

The heaventree of stars hung with humid nightblue fruit. (p. 698)

A bit later on, in the midst of a long list of "features of the constellations" that Bloom considers, he thinks about Tycho's Star:


the appearance of a star (1st magnitude) of exceeding brilliancy dominating by night and day (a new luminous sun generated by the collision and amalgamation in incandescence of two nonluminous exsuns) about the period of the birth of William Shakespeare over delta in the recumbent neversetting constellation of Cassiopeia ... (p. 700)

Two things of note here. First, he's wrong about what the star actually was (it was a supernova, not a collision between two suns). Second, he's pondering the exact same Shakespeare/stellar fact that Stephen made note of earlier. The first fact is just a little Joycean joke, frequently the characters get facts wrong in their inner monologues throughout the book (such as the idea that the supernova appeared at Shakespeare's birth instead of when he was 8 years old). The second fact is one of my favorite things about this book.

The two characters, Bloom and Stephen, don't know each other and have never met (until about halfway through the text) but there are numerous occasions throughout the book where their thoughts appear to be on the same wavelength, indicating a vast invisible web of the unconscious. An evangelist of synchronicity long before the term was even invented, this is how Joyce saw the universe. (There are more than a hundred similar little synchros scattered throughout the book.)

The final mention of Cassiopeia comes in Bloom's late night, exhausted half-dreaming fantasizing. This time he imagines himself as a comet in space, wandering way out deep "beyond the fixed stars and variable suns and telescopic planets ... to the extreme boundary of space" until "somehow reluctantly, suncompelled" he would return (how great a word is "suncompelled" in this instance?). In his imagination:


he would somehow reappear reborn above delta in the constellation of Cassiopeia (p. 728)

To close here, I'm going to make an assertion in a roundabout and most likely confusing fashion. In this final instance of "Cassiopeia" I think Joyce is linking Bloom-Stephen-Shakespeare all together. This link is one of the underlying currents in the book. Earlier I explained how Stephen connects himself with Shakespeare, seeing the "W" shaped constellation as a recumbent "S". In the earlier Bloom quote, Bloom also identifies Cassiopeia as "recumbent" and here he's clearly linking himself with the Cassiopeia supernova that (in the collective mind of Ulysses at least) coincided with the birth of Shakespeare.

One of the main themes of Ulysses is the idea of consubstantiality of father and son; hence Bloom (the father figure whose son died as a baby) and Stephen (the lost 22-year-old whose dad is a drunken mess) coming together quite randomly is the epiphany of the book. And in that aforementioned chapter where Stephen explains his strange Shakespeare theory, he is arguing that Hamlet is actually representing Shakespeare himself as is Hamlet's father (it's often argued that Hamlet is influenced by Shakespeare's son Hamnet who died at age 11). Thus, Hamlet's father = Hamlet = Shakespeare which is equivalent to the situation in Ulysses where Bloom = Stephen = Joyce.

Who ever said this stuff was complicated?
Posted by PQ at 12:05 AM