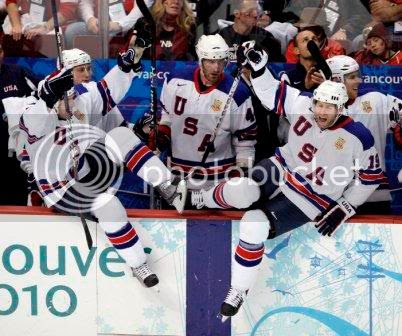 Team USA is heading into the Olympic gold medal game on Sunday after absolutely demolishing Finland this afternoon. They scored six goals in the first 13 minutes of the game. After number four went in, Finnish goalie Miikka Kiprusoff (the same guy who said he wouldn't play on the team if he wasn't the starter) took himself out of the game, something I've never seen before in a hockey game. The goal went in, USA celebrated and Kiprusoff skated directly to his team's bench and left the ice. That's about as bad as it gets for the Calgary Flames' stalwart netminder.

Team USA's opponent in the gold medal game will be determined tonight at 6:30 PST when Canada and Slovakia face off. I correctly predicted that Slovakia would upset defending gold-medalist Sweden and now they face an amped-up and avenging Canadian team that pounded Russia in its last game. In my first post about these Olympics, I made it clear that I really have faith in this Slovak team even though they've been overlooked from the very beginning. They have alot of skill on offense with Marian Gaborik, Marian Hossa, Pavol Demitra, Michael Handzus, and even the ageless Ziggy Palffy; their defense is solid and led by the enormous Zdeno Chara; and the goaltending of Jaroslav Halak has been solid throughout the tournament.

I almost don't want to pick a winner for this one because I'm really going to be rooting for Slovakia and I think they definitely have a chance in this game, one in which they are huge underdogs (the Vegas line has Canada winning by 2.5 goals), but Canada is just too scary right now. With Roberto Luongo in net, I don't know if anyone can beat them but we'll see what happens in the gold medal game.
Posted by PQ at 6:45 PM