The baseball season is barely one-tenth of the way through, still far too early to make any solid judgments but there's been plenty of interesting developments to watch thus far. In the three full weeks of watching games (I haven't been able to watch any of the NHL or NBA playoff games so I've settled for absorbing tons of baseball on MLB.tv) I've caught a bunch of interesting observations.

Though I'm often clicking through various concurrent games depending on the situation, competitiveness, team interest level, etc of each one, I do often find myself deciding to stay put and watch one baseball game in its entirety. It's often said that you see something new any time you watch a baseball game---in other words, no matter how many games you've watched, something will occur that you've never seen and it's often something memorable. A couple weeks ago, I was watching a Saturday afternoon game between the Tampa Bay Rays (a team I'm quickly becoming a fan of) and the Chicago White Sox. In the bottom of the 4th inning, Tampa starter Wade Davis got himself into a jam walking the bases loaded with two outs. Lucky for him, the batter he was facing was the #9 hitter in the White Sox lineup.

He thew a biting fastball up and in shattering the bat of Brett Morel who followed through with his splintered lumber and managed to pop the ball up just barely over the pitcher's head and beyond the mound at such a perfect and unintentionally soft velocity that it plopped down onto the grass untouched by the onrushing middle infielders. I've never seen such an occurrence, a perfectly lucky little blip in the expected outcome of things. It was like a pinball that manages to get lodged into some perfectly unreachable, almost structurally defective spot in a pinball machine. And a run scored on the play which loaded the bases once again, this time with the leadoff batter coming up for the White Sox. Alas, the Sox counterproductively put one of the worst hitters in baseball at the very top of their lineup so up steps slappy out-machine Juan Pierre to presumably kill his team's big rally and let the opposing pitcher escape unscathed. That's what I thought would happen.

Instead, Pierre took a mighty swing at the first pitch he saw and clocked a liner to right field that looked to possibly be a homerun otherwise an off-the-wall extra base hit that would clear the bases. Suddenly across the screen, in full horizontal hoverance above the warning track dirt, rightfielder Sam Fuld launched and about 3/4ths of the way through his flight managed to grab the flying orb in his outstretched glove. Inning over, three runs saved. It has to be on the short list of greatest catches I've ever seen while watching a game and it was especially shocking because of the above described circumstances. 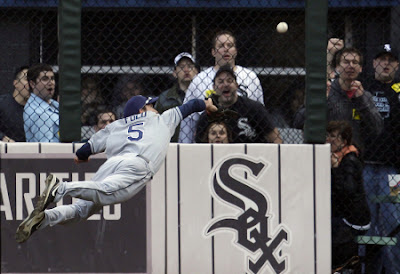 Rob Neyer wrote a nice piece on "The Legend of Sam Fuld" the other day, noting his penchant for acrobatic catches. Looking through the video archives of Fuld's many highlight reel catches, though, it appears he's got a certain flair for the dramatic, often diving or sliding when he doesn't really have to. Having said that, the catch in that White Sox game is still one of the best I've ever seen.

As of this morning, the New York Mets have the worst record in baseball. They're off to a terrible start on the year and they've lost 9 out of their last 10. Most of that can be attributed to their terrible pitching, they've given up more runs that any team in the National League thus far, they've also looked atrocious in the field, dropping or completely missing easy fly balls in key moments.

The offense has been terrible as well, but I'm happy to see that Carlos Beltran has returned to his awesome self, hitting .286/.355/.554 thus far, after a bunch of knee problems had left his future in doubt before the season. The 33-year-old Beltran won't be galloping around the pastures of centerfield anymore and he seems to have put on some weight, but the guy can still hit and that's great. If he stays healthy and keeps hitting like this he'll almost certainly be traded away during the season and I'll be sad to see his Mets career come to an end without him ever getting to avenge that horrible swingless strikeout to end the Mets' World Series run in 2006. But at least he'll probably go out on a strong note and escape this festering team.

Through some sort of glitch in the system, I managed to scoop up righthander Dan Haren very late in my fantasy draft this year. That glitch seems to mirror the real life one in which somehow, in a league where durable, effective pitchers are such a rare and treasured commodity, the Angels picked up Haren last year for spare parts. Haren has been superb thus far this year. In four starts he's got a 27-to-2 strikeout-to-walk ratio and he's thrown a few gems, including a one-hit shutout of the Indians (the highest scoring team in the league right now, for what it's worth). His approach has been fun to watch, as he operates with emotionless precision, carving through batting orders and looking away heartlessly after a hitter flails at strike three and marches away frustrated. He looks extremely confident in his stuff, throwing lots of changeups and darting splitters. Don't be surprised if he reels off some crazy 15-2 first half, this guy has always been that good.

That we're talking about the Cleveland Indians at all is an example of how small sample sizes can be deceiving but, to be honest, they're kicking ass thus far. After 18 games, they're tied for the best record in baseball and they've got by far the best run differential in baseball. I can promise you they will not maintain that pace but, still, it counts for something. As I noted in my AL Central preview, this is a team that can score some runs, and they've got the best offense in the league thus far in the young season. And they've done it thus far without strong output from their two best hitters, as both Shin-Soo Choo and Carlos Santana have struggled thus far.

Similar to Carlos Beltran, I'm particularly glad that Grady Sizemore has made his way back and didn't seem to lose anything along his journey through the underworld. The former face of the franchise and projected superstar hasn't played at full strength in two years and yet he came back this week looking as good as ever. In his first game he smacked a homer and a double then went 3 for 5 with a walk and a double in his second game. He's still only 28 and so this could be the beginning of Sizemore's second career.

One thing that's always great to observe as the season takes shape is the emergence of rookies. Three rookie pitchers have caught my attention early on: