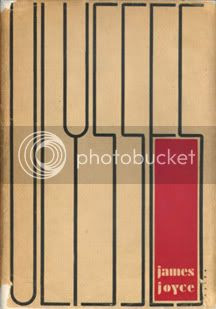 Today, Slate published a piece by a Mr. Ron Rosenbaum entitled "Is Ulysses overrated?" in which the author attempts to argue that Ulysses is indeed overrated and that the public shouldn't care to read it at all except for one chapter: "Ithaca," the penultimate episode of the book. In a sloppy rendering of the Ithaca chapter's Q&A format, Rosenbaum had this to say about the greatest novel of the 20th Century:


Ulysses is an overwrought, overwritten epic of gratingly obvious, self-congratulatory, show-off erudition that, with its overstuffed symbolism and leaden attempts at humor, is bearable only by terminal graduate students who demand we validate the time they've wasted reading it.

My initial reaction to this was seething anger and I'm still pretty annoyed about it hours later. My feelings are best expressed by Ghostface Killah's words, "I should slap fire out his ass, snap his bones in half and watch the stock market crash." What annoys me so much about it is that Ulysses is in fact so badly underrated and under-read that it isn't often discussed at any length in the mainstream media except for Bloomsday or on the rare occasions when a new book about how great Ulysses is manages to penetrate to the surface of mainstream consciousness. So when I come across an article in a magazine as widely read as Slate that attempts to deter the public from reading a book that is already being read by almost nobody, it has a tendency to really piss me off. Especially when the author clearly contradicts himself and doesn't seem to know what he's talking about.

While he lambasts Ulysses for being an "overwrought, overwritten...show-off [of] erudition," he praises the two most overwrought and overly erudite chapters in the book: Ithaca and Oxen of the Sun. He describes Ithaca as "the one chapter you should read before you die" and also mentions that he loves the Oxen of the Sun episode, calling it "skillful and funny." While these two are also my own personal favorites of all the 18 episodes, they are without a doubt the most difficult to read---they're both densely packed with tons of obscure vocabulary words and absurdly long sentences written in purposely overdone erudite styles. If you subtract those two (plus the Scylla and Charybdis episode which Rosenbaum also speaks fondly of), the rest of the book is not so dense at all. In fact, much of the remaining material is in the same basic style of A Portrait of the Artist as a Young Man which Rosenbaum "loved."

Thus, in his half-assed essay he's completely contradicting his own argument while altogether ignoring some of the most fun-to-read and brilliant material in the book like the Lestrygonians chapter (with Joyce's wonderful paragraphs on food and eating), Sirens (written in the form of a Bach fugue), Cyclops (the book's funniest chapter which also expresses Joyce's staunch pacifism), not to mention the brilliant passages brought about by Nausicaa's style of tumescence and detumescence.

To say that the book "is bearable only by terminal graduate students who demand we validate the time they've wasted reading it" is not only a jerky remark but it's also frighteningly anti-intellectual. I've never been to graduate school, never even read Joyce in school at all (nor was I an English major) and I got through the book in a span of two months and have continued to pick it up to read bits and pieces nearly every day. I'm not a scholar or a professor, it's just a damn good book. As many of the comments on the Slate piece attest to, it's also a book that gets better and better each time you read it. One of my favorite responses to the piece was this one by someone named Brian South: "Don't you dare. Ulysses is like a puzzle whose picture changes every time you put it together. It's genius in every way."

Unless it's universally hailed as the greatest novel in the entire cosmos, Ulysses can never be overrated because it already doesn't get nearly the praise it deserves. Think about it for a minute. It is a comic epic that zooms in to the details of one single day in a modern city, encompassing nearly 800 pages, essentially exemplifying how a single atom can contain the entire universe. Over all those pages and the book's 18 episodes (each written in a different style) somehow there are constant connections, synchronicities, and cross-references all across the book, a book that Joyce wrote by hand over a period of seven years. Every word is placed for a reason (Frank Delaney's excellent podcast really goes deep into that aspect). The detail, conception and execution of its macrocosmic and microcosmic structure is unmatched in literary history (except for maybe Finnegans Wake). And the key point of it all is the affirmation of life as it is (Yes!) with other key elements like love, compassion, and the timeless essence of everyday life emphasized as well. In a jocular, parodic, mock epic comedy novel.

All of that, plus the book is purposely designed to try to make its reader smarter, like an encyclopedia or a dictionary.

And this guy is calling it overrated?!?!

Of course, everyone is entitled to their own opinion and there are certainly folks who would agree with Mr. Rosenbaum. His piece was inspired by a list that recently appeared in The Telegraph indicating the 50 books that folks should NOT read before they die, with Ulysses number-1 with a bullet. The Telegraph list was written in an obnoxious, incendiary, and aggressive manner that makes it seem like either an April Fool's joke or a shock piece meant to stir up responses. In any event, the Telegraph list and Slate's article are a disservice to the public, especially coming at a time when Joyce's works of genius are being coveted more and more by the Ivory Towers of scholasticism and usurped from the hands of the everyman it was written for. Ulysses already has an unfortunate reputation for being largely unread by the general public, so when these widely read publications decide to publish articles on it they ought to make sure the writer knows what the fuck he's talking about so they don't continue to dissuade people from approaching this incredible book. "For the rest let look who will."
Posted by PQ at 1:23 AM