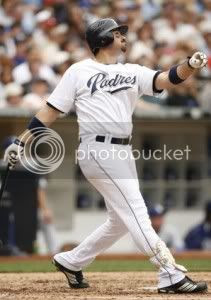 I like the Padres, I go to many of their games (eight this year so far, two in the past two weeks), and I've written about them a bunch of times here already. I'm very happy to see them in first place but as I've mentioned before, the Rockies and Dodgers have really started to play better after slow starts and they've been biting at the Pads' heels for weeks. The question is: are the Padres truly good enough to win this division? With their extremely pitcher-friendly home ballpark, there's been some confusion about the overall quality of this Padre team. Their pitching has been great, but some silly people discredit that as a park illusion (even though their ERA in away games is the best in the majors) and, big ballpark or not, nobody believes in their offense. The park-adjusted statistics (TrueAverage and OPS+) do show that they've got a pretty weak offensive attack with Adrian Gonzalez (.324 TAv) and Nick Hundley (.271 TAv) being the only above-average hitting regulars. Away from the wide expanses of Petco Park, the team hasn't hit very well at all but with their undeniably awesome pitching they've managed to amass the best road record in the National League.

And the offense has actually performed pretty well at home while the pitching has been great:

They are a team of stellar pitching (led by burgeoning rookie Mat Latos in the rotation and a historically great bullpen) and a just-good-enough offense. It's basically Adrian Gonzalez and a bunch of guys who "get the job done." Early in the season it looked like Chase Headley was going to finally bust out as a high-caliber player but he's really slowed down and currently sits at a pretty weak .259 TAv. Thankfully, Nick Hundley has emerged as a good hitter and, despite limited playing time so far, I'm liking what I see from outfielder Aaron Cunningham.

I had great seats for a Padres-Rockies game last week and saw a nice duel between Pads' lefty Wade LeBlanc and Rox righty Jason Hammel. Aside from an extremely impressive homerun launched over the fence in the deepest part of the yard by redhot youngster Carlos Gonzalez, LeBlanc didn't allow much and pitched a great game but it was blown open by the long-ball serving ways of San Diego reliever Edward Mujica. Colorado looked strong and they took 2 out of 3 in that series without their best player (Troy Tulowitzki). The two teams had a great battle in Colorado last night and they're in a close game right now as I type this. Look for a very entertaining race to the finish line between these two teams over the next three months. Obviously I'll be rooting for the Padres.

While I picked the Dodgers to win the division in my preseason picks, their erratic play has me questioning whether they'll even stay in the mix much longer.

Oh boy was I ever wrong about the Brewers. I feel bad for the Milwaukee fans devoting their time, energy, attention, and emotion to this team. On the other hand, the success of the team on the Ohio River in Cincinnati is undoubtedly for real. Their lineup is very deep, especially with Scott Rolen recapturing his glory days (.306 TAv). Joey Votto (.337 TAv, 22 HRs) is having a huge year, Brandon Phillips is having his typical good year, and I think you can expect Drew Stubbs and Jay Bruce to continue to get better as the season goes on. They've got talented young pitchers up the wazoo (rookie Travis Wood almost threw a perfect game in Philadelphia today) and I don't think even the clumsy ineptitude of toothpick-chewing Dusty Baker can sink this cruising ship. 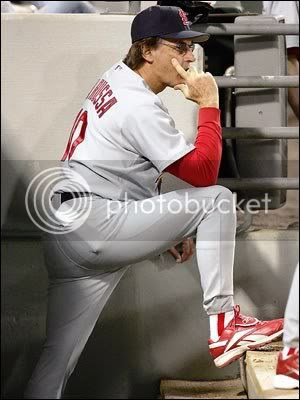 On the other hand, did anybody see the ending of that Rockies-Cardinals game the other night? The Rox pulled a miracle comeback, scoring 9 runs in the 9th inning while down by 6 but what in the hell was Tony La Russa thinking playing his outfielders so deep? Yet another example of TLR overmanaging to the detriment of the team. Check out the highlights, it was a 9-7 game with 2 outs and a runner on third, Carlos Gonzalez batting. That run at third was meaningless, the pitcher had to simply get Gonzalez out to win the game. Gonzalez stroked a line drive to right field that would've normally been hit directly at the right fielder but Randy Winn was playing as far back as the warning track. I believe this is called "no doubles" defense but who cares about a double in that situation? It looked like the outfielders were positioned there to be ready to retrieve a homerun from over the fence...which is just insane! La Russa was also largely blamed for (twice in one game) losing that extremely long game to the Mets earlier this season. The Cards are supposed to be the favorites to win this division, their rotation is superb (2nd best ERA behind the Padres), and the lineup is solid but I wouldn't be surprised to see La Russa screw up a few more tight games and lose this division by one or two games in the end.

And I'm amazed the Pirates have played bad enough to fall below the Astros. The Astros are pathetic.

Tim Hudson has been the surprise ace (2.44 ERA) of a strong Atlanta pitching staff and the depth of offensive production they've had is staggering. They have an unbelievable ten (!) hitters with a True Average of at least .270. Nine guys have at least a .280 TAv. Five (!) hitters have at least a .290. I think it's clear that they've got a strong hold on the #1 spot atop this division but don't count the Mets and Phillies out. The 2nd place team here will probably take the Wild Card. 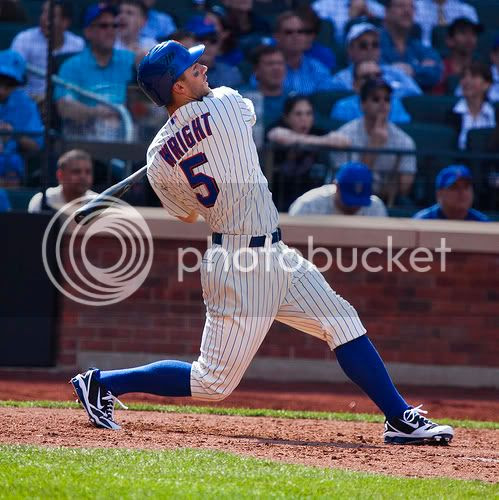 I've been pleasantly surprised with this Mets team all season long. As good as that Braves offense is, the Mets are still right next to them in overall True Average. David Wright has regained his status as the Metsiah. His True Average of .326 leads all major league third basemen, a serious feat considering the next closest is Evan Longoria at .313. Wright also leads all 3B in VORP and is 7th in all of baseball by that stat. Angel Pagan has turned into a nifty player, Jose Reyes is getting his mojo back, Jason Bay hasn't hit homers but is still producing (.293 TAv), and although he's slowed down as of late I still trust in what Ike Davis can do. Don't forget about Carlos Beltran! I worried about the rotation coming into this season but Mike Pelfrey has established himself as a force to be reckoned with after adding a splitter to his arsenal while Johan Santana is showing signs of coming out of his weird slump (which was apparently due to tipping off his vaunted changeup), Jonathon Niese is becoming established as a consistent starter (.541 SNWP or Support-Neutral Winning Percentage), and R.A. Dickey has successfully been a big hairy knuckleballer...what's more fun than that?

The Mets bullpen is what worries me. Are Elmer Dessens and Fernando Nieve reliable? Maybe for now, but I'd be pulling my hair out if they were protecting leads late in the season in a pennant race. Although Rob Neyer sees no discernible difference in his peripheral numbers, K-Rod is worrisome. It'd be fun if the Mets could fight their way to the top and knock off the Braves or beat out the Phillies for the Wild Card but it's easy to foresee some big late game collapses by that Met bullpen.

NL MVP thus far: Adrian Gonzalez, Padres
The San Diego star has had yet another huge season batting in the middle of a lineup without any other major threat (see above) and playing half his games in the worst hitter's park in the majors. Taking a look at his park-adjusted numbers at Baseball Prospectus' site (scroll to the Davenport Translations), Adrian would have 38 homeruns right now if he were in a normal park. The major league leader has just 24. Look at his road numbers for crying out loud: .353/.410/.660 AVG/OBP/SLG. 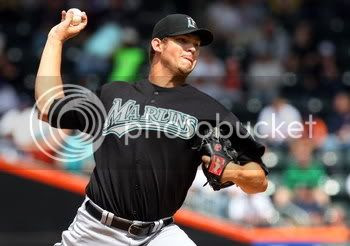 There are a few guys in the National League having great pitching seasons. The most talked about is probably Ubaldo Jimenez, but Roy Halladay is having another great year, so is Adam Wainwright and even Mat Latos. Josh Johnson has been better than all of them. His 1.70 ERA is the best in baseball (so is his 1.84 Runs Allowed), he has the most Quality Starts, the best opponents OPS, and he's a hundreth of a point behind Cliff Lee for best WHIP all while throwing more innings than all but five pitchers in the NL. Looking at more advanced stats, he currently leads all major league pitchers in Wins Above Replacement, Support-Neutral Win Percentage, and ERA+. His stature in that last mark is just insane, at 246 it means he's prevented runs at a rate 146-percent better than the league at this point (that number also adjusts for any advantage he may get from his home ballpark). The last pitcher to be in that territory was vintage Pedro. Keep watching!
Posted by PQ at 1:12 AM