How 'bout them Padres? 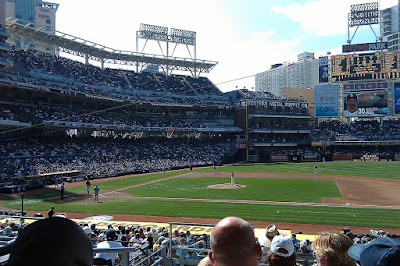 It's certainly been a great season for the Padres so far. I managed to secure great seats to Thursday afternoon's battle with their rival Dodgers and watched a tense 2-2 game that was won in the bottom of the 9th by Padre pinch-hitter Oscar Salazar. On "Throwback Thursday" with the Padres sporting their 1978 brown-and-yellow uniforms, it was fitting that the game was won by one of the only players wearing the true 70s high stirrups.

*   *  *
It was announced during the game that the Padres had just traded for Miguel Tejada from Baltimore and a great buzz hummed throughout the 42,000-plus in attendance. I heard some bad words about current struggling shortstop Everth Cabrera and grumblings about what Tejada has left. But I like the deal very much and was excited when I heard about it.

Make no mistake about it, this Padre team has some run-scoring issues. Their pitching is so unbelievably amazing that this hasn't hurt their success but general manager Jed Hoyer recognized the team's main issue and made clear improvements with some offensive reinforcement for the pennant race the Padres are now seriously involved in. In his first year running the team, he's already shown a knack for shrews trades. This morning he picked up a solid corner outfield bat in Ryan Ludwick from the Cardinals.

*   *   *
The key in acquiring Tejada is that the Padres have gotten pretty much nothing offensively out of their shortstop position. After a strong rookie season last year, Everth Cabrera has struggled terribly this year with a .198 average and .270 OBP. He's looked pathetic at the plate recently as he's receded further into a slump and taken to bunting in almost every at bat to try and beat out an infield base hit. With David Eckstein injured, Jerry Hairston Jr. has had to cover for him at second base and so Cabrera has been left to rot out there. Now he'll be a back-up and pinch runner.

Tejada hasn't hit well in Baltimore this year but escaping that decrepit failure of a franchise (and the highly competitive AL East division) for the first place Padres should enliven him a bit. He had a very good year for the Astros last season, leading the National League in doubles with 46 so he probably has something left to show NL foes. His diminished defensive range shouldn't be a huge problem with the Padres pitching staff leading the majors in strikeout rate and thus putting fewer balls in play. He's also a perfect platoon partner for Chase Headley at third: Headley struggles with a .194/.263/.242 line against lefties while Tejada has a strong .821 OPS against southpaws for his career.

Ryan Ludwick is a huge addition for this team. Not only is he a very good fielder with a cannon arm (thus not disrupting but perhaps adding to the excellent Padre defense) but he's a solid above-average hitter (.288 True Average) who immediately becomes the Padres' second best offensive player. As a fan, I'm very excited about this upgraded lineup.

Best of all, the Padres didn't have to give up very much to get these two hitters. The best player given up is probably minor league pitcher Wynn Pelzer who they sent to the Orioles in exchange for Tejada. Pelzer was the #5 prospect in their system before this season according to Baseball Prospectus but he's struggled at Double-A this season and will probably end up in the bullpen.