This makes me want to go see the movie a third time.

And then there's this cool graphic representation of the whole dream heist. Click for a larger view and zoom in to study it. 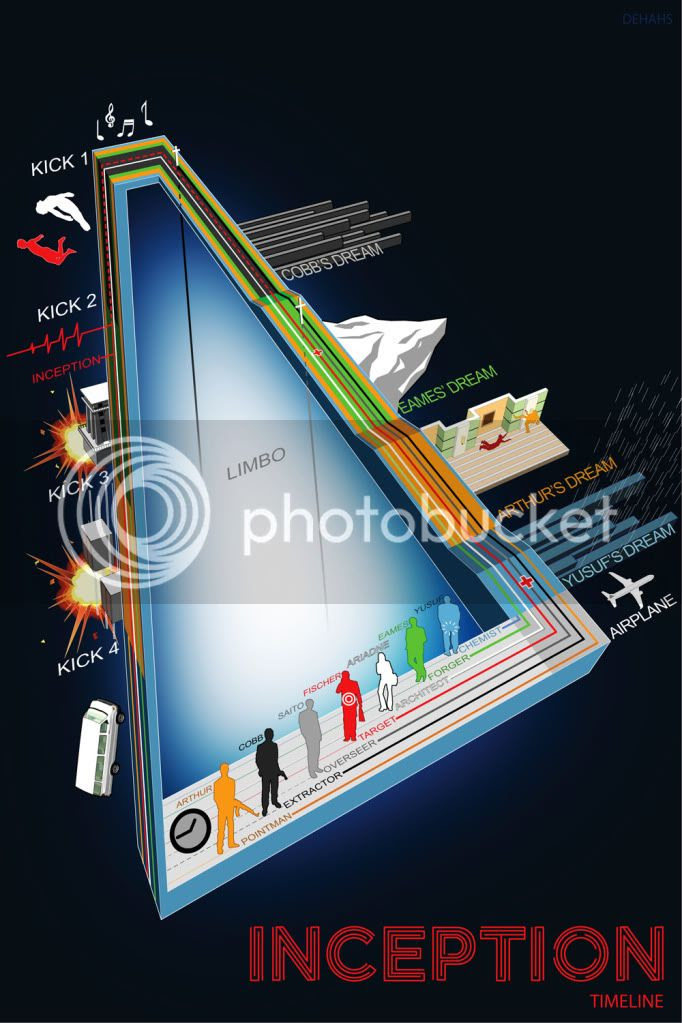 A couple things I didn't catch in my first viewing of the film but which stuck out when I saw it a second time, both involve the chemist Yusuf:

*When they go to meet Yusuf for the first time, he takes them into a dark dreary backroom where people come to take sedatives and dream for hours (in deep dreams that feel like days or weeks). Both Yusuf and his creepy dream den attendant eerily insinuate that they know Cobb and that he's done this before and been there before even though, as far as we can tell, this is the first time he's met these people. It's a very dark, dank, spooky scene that feels like the inside of a cave, and after Cobb tests out Yusuf's special sedative he's a bit of a mess. We see him in the bathroom splashing water on his face and looking in the mirror (very reminiscent to the opening of "Shutter Island") trying to convince himself it's not a dream. When he tries to spin his totem it goes flying off the table and this was actually a part where many people have suggested Dom proved he was dreaming. I'm not so sure about that, but the way Yusuf and the old guy talk to Dom with familiarity is weird and never explained.

*This one is a lot less relevant (or at least I think it is), but I caught on to the line where Arthur derides Yusuf for not going to the bathroom on the plane. Apparently his feeling of having to pee (or, since he's heavily sedated, peeing on himself) is what caused the heavy rain in that dream level.
Posted by PQ at 5:51 PM