The James Joyce Quarterly and the Tunc page

In my study of Joyce, I constantly come across interesting articles through Google from the James Joyce Quarterly but I can never read the articles because, aside from one page previews, they're hidden behind the walls of archives like JSTOR.com which require that you have a subscription. To have a subscription, one must be a scholar, student, or researcher. When I try to register for the site, I'm immediately shunned away with the message: "Unfortunately, we do not recognize you as belonging to an institution or organization that has access to JSTOR." The often extremely insightful  essays written by all kinds of Joycean scholars from the 30-plus years the Quarterly has been published aren't available anywhere else on the web so I recently decided to go ahead and subscribe to it for a year and my first issue arrived the other day. 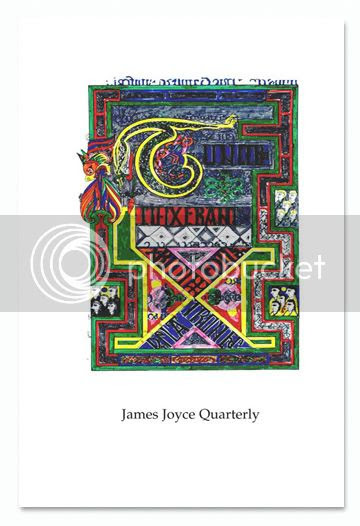 It's a beautiful looking softcover book that's about the size of a literary journal. It's labeled as Volume 46, No. 1 Fall 2008 which seemed weird at first but I discovered that it was written over the period of Fall 2008 to Summer 2009 (and then published at the beginning of 2010? I have no idea). There are at least two articles in it that talk about events from 2009 (one that details a Joyce Conference held in Rome in 2009, the other about Bloomsday '09 at the University of Tulsa where the Quarterly is published), then a few different Joyce essays exploring perspectives on Dubliners, Ulysses, and Finnegans Wake (more on that later), followed by book reviews for a shockingly huge number of brand new Joyce books that appeared during 2009 (about twelve).

But, the reason I'm posting about the Quarterly is to discuss its cover image which is the elaborately colored thing shown above. The image is of a children's coloring-book replica (colored in beautifully) of the so-called "Tunc page" from the Irish Book of Kells. The Book of Kells is a magnificently illustrated book of New Testament passages that was transcribed by Celtic monks some time in the 9th century. The actual page looks like this: 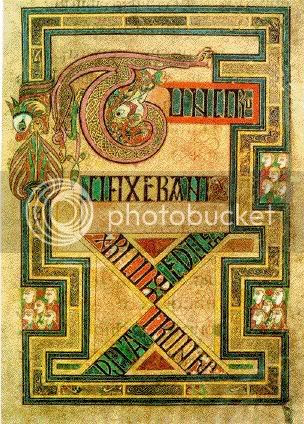 What makes The Book of Kells so cool is that it was created during a period in Irish history when Christianity was still in its early stages and thus was interpreted and assimilated into older pagan mythology and its symbolic forms. And so the pages and the passages they feature are absolutely loaded with deep meaning in an early form of Christianity that was not yet in accord with the orthodox interpretations and boring, historically rigid version of things which eventually developed from the Byzantine Church councils right around the same period of history (700-800 AD). These councils determined that a culture's pre-Christian symbols, images, and other icons must be destroyed and banned.

So, let's take a quick look at the Tunc page and what's going on there. I've posted a large picture of it above so hopefully that will suffice to help you see what it is I'm referencing. I'm deriving the interpretation of it from pgs 467-469 of Joseph Campbell's Occidental Mythology. The page bears the sentence from the Matthew Gospel: "Then there were crucified with him two thieves" in Latin as "Tunc cru cifixerant XPI cum eo du os la trones" and it is that first elaborate "Tunc" that the page is named after. The entire page is encircled by the very old familiar mythological symbol of the self-consuming, self-renewing serpent, a popular Oriental symbol which is symbolic of the self-consuming and self-renewing powers of life. The serpent has a lion head and the "T" in the word "Tunc" (that cool J-looking thing that jumps out of the page) is also a lion with serpent attributes that is "either swallowing or emitting (or both) a tangled pair-of-opposites." As Campbell explains, the serpent is representative of "the lunar mystery of time," life waxing and waning, rising up and then dying, within the sphere of time while the lion is "the solar power, the sun door to eternity." The serpent then is the "demiurgic, world-creating and -maintaining principle, or...the God of the Old Testament" according to Campbell while the lion is the New Testament view, the eternal door, the "way and the light," the Redeemer (the New Testament is considered to have redeemed the Old Testament where Adam and Eve's fall from grace locked man of heaven).

The Greek letters XPI inserted in the text after "crucifixerant" are the Greek letters of abbreviation for Christ and, if you turn the page clockwise to lie on its right side, you see that XPI is spelled in big letters on the page. The huge curled "T" becomes the circle in the Greek "P", the middle letter "symbolizing the Savior between the two thieves" but here is where it all comes together: the whole thing is uniting these lunar and solar symbols beautifully. It is on the fifteenth day of each lunar month that the full moon appears directly across from the sun which shines on it and now observe, along the border of the page in the curving serpent's body, there are three groups of five men, fifteen. Easter (the most important day in Christianity, celebrating Christ's resurrection after being crucified) is celebrated on the first Sunday after the full moon on or following the Spring equinox and, as described in the Synoptic Gospels, the crucifixion took place on the fifteenth day of the Jewish month of Nisan which is around March-April. It all seems to be "a lunar theme of death and resurrection."

But it gets better: the letter T is one of the symbols of the cross (+) and the cross is a traditional mythological sign of the earth (think of the north, south, east, west axis) and now picture the earth between the sun and full moon... It is at the time of the Spring equinox when the earth is in perfect alignment, standing upright on its axis instead of titled as it faces the sun---seeing the earth as Christ crucified between two thieves (the sun and moon) deepens our view here. Also consider that the T, the cross, as a symbol for the earth is also the symbol for the principle of space while the word Tunc, which means "then," is a word of time. It is in the field of space-time, phenomenality, that the mystery of Christ's Incarnation and Crucifixion took place, the eternal solar aspect coming forth into lunar time.

The monks (the "filid", as they're called) who created this mind-blowing manuscript were trained under a highly organized system in which "they learned not only the entire native mythological literature by heart but also the laws according to which mythological analogies were to be recognized and symbolic forms interpreted" and they applied this training to read the symbols of the Christian faith and to recognize the parallels between it and their native pagan myths and legends.

What does this have to do with James Joyce? I'm glad you asked. Again, here's my mentor Joseph Campbell from his awesome book A Skeleton Key to Finnegans Wake:

The reader of Finnegans Wake will not fail to recognize in this page something like a mute indication that here is the key to the entire puzzle: and he will be the more concerned to search its meaning when he reads Joyce's boast on page 298: "I've read your tunc's dismissage." 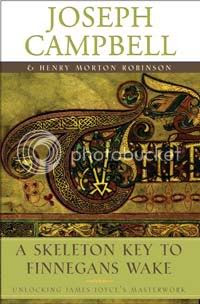 The cover of the Skeleton Key book bears a huge letter T from a page in The Book of Kells, highlighting the ancient manuscript's importance for an understanding of Joyce's maze-masterpiece.

There is a great article in the Quarterly called "Finnegans Wake for Dummies" by Sebastian Knowles of Ohio State University (see my discussion of that article here) in which he conceives of an easier way to approach the text, starting from the middle of the book and working your way out going from the easier chapters to the increasingly difficult ones. Telling the story of a semester spent teaching the book in a new seminar for grad students, he describes how he came across the Tunc page in a coloring book on the floor of his five-year-old's room and brought it in for his students to color in, one of which is on the cover of the Quarterly.

Knowles' reading plan begins with Chapter 5 in Book 1, pgs 104-125. These are the pages devoted to the "Mamafesta," the Manifesto of Anna Livia Plurabelle, the flowing female presence that opens the book and runs throughout it as a river. Indeed, it could be said that the entire book is devoted to this female-archetype with the initials ALP. The "Mamafesta" is a letter written by ALP memorializing her deceased husband and, as can be seen from even a brief glance at any part of the chapter, it is also Finnegans Wake itself (pg 107: "The proteiform graph itself is a polyhedron of scripture."). But this exhumed manuscript that was dug out of a local rubbish heap by a neighbor's hen is also the Book of Kells which was once buried to protect it from the Danes invading Ireland in 853 AD. For four pages (119-123) in this Mamafesta chapter, Joyce parodies the language of Sir Edward Sullivan's description and analysis of The Book of Kells and thoroughly describes the Tunc page but he is also describing his own crazy book with its multitude of meaning, unnecessary elaborate flamboyancy, weird funky sigla, and "the sudden sputtered petulance of some capItallIsed mIddle; a word as cunningly hidden in its maze of confused drapery as a fieldmouse in a nest of coloured ribbons" (FW 120).

-The Book of Kells is now in the library of Trinity College in Dublin. A facsimile of the volume was produced in 1990, this handbound leather edition comes in a hand-crafted presentation box accompanied by a volume of scholarly commentary. There have been 1,480 copies of this facsimile produced worldwide and one could pick up a copy for the meager price of... $20,000.

-In his Book of Kells study, Bernard Meehan notes that the lion (which appears twice on the Tunc page) is also a "potent symbol of Christ's resurrection. According to the natural history contained in the fifth-century Greek text Physiologus...lion cubs were born dead, but on the third day were revived by their father's breathing on their faces or roaring. This was a striking metaphor for the revival of Christ three days after his death." The lion was also associated in the Old Testament with the royal house of Judah, from which Christ was thought to be descended.

-Ulysses contains a reference to the Book of Kells in the crazy, hallucinatory "Circe" chapter. The polymorphous beastly creature named Virag that pops in and out saying crazy stuff to Bloom exclaims at one point: "Verfluchte Goim! He had a father, forty fathers. He never existed. Pig God! He had two left feet." The first part is Yiddish for "Cursed Gentiles!" and he is alluding to Christ. "Pig God!" is a common curseword in Italian ("Porco Dio!") similar to "goddammit." And the two left feet thing refers to a page from the Book of Kells of "The Virgin and the Child" in which the child has two left feet while the Virgin has two right feet as you can see here (click on the pic and zoom in): 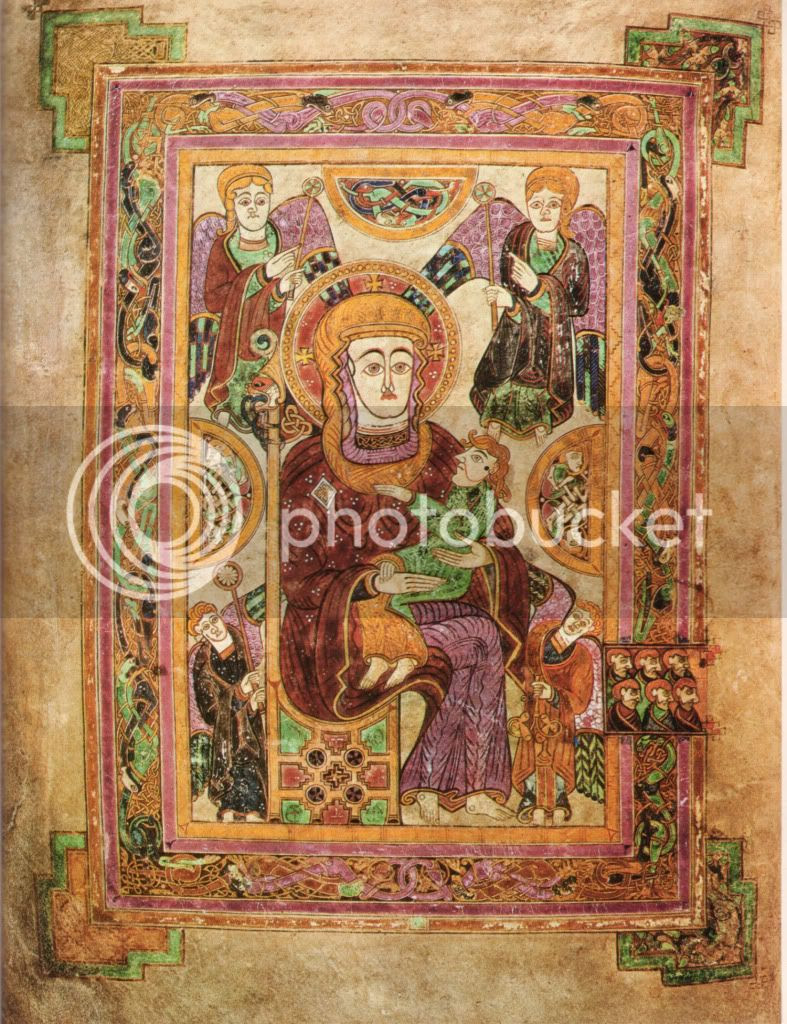