"A man who has not passed through the inferno of his passions has never overcome them. They then dwell in the house next door, and at any moment a flame may dart out and set fire to his own house. Whenever we give up, leave behind, and forget too much, there is always the danger that the things we have neglected will return with added force."
- Carl Jung, Memories, Dreams, Reflections pg. 277 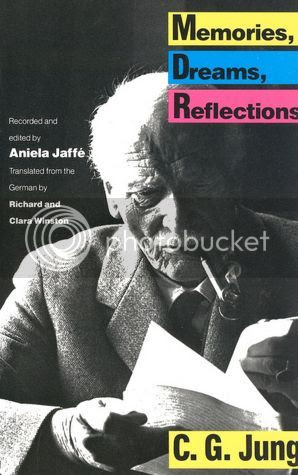 In the midst of a conversation with my girlfriend the other day, the subject of which escapes me now, I was led to pick up an old favorite book of mine from the bookshelf and talk a bit about it to her. The book was Carl Jung's autobiography Memories, Dreams, Reflections. I went through a phase of closely studying Jung's writings and nothing came close to the powerful impact of that book. A highly influential psychologist with stacks and stacks of fresh ideas and insights, Jung never seemed to go deeper than he does in this book.

As is perfectly fitting for the man who coined the term "synchronicity," Jung's book suddenly popped up in my atmosphere again that same night as I was reading a recently-discovered blog called Brain Pickings. Seemingly out of the blue, there was Jung's Memories, Dreams, Reflections at the top of the page with a little blurb and even an illustrated diagram summarizing the book's story. This, of course, prompted me to start piecing together ideas for a blog post and I faintly remembered taking copious notes on the book when I had first read it in early 2009.

It was in November of 2009 that I initially started writing this blog, but before I ever decided to start sharing my own thoughts on the internet I had been practicing my writing privately in notebooks for a few years. Digging up my old notes for Jung's book I came across not only a dozen or so pages worth of quotes I had copied down from it, but even a thorough, glowing 8-page review I wrote for it. Looking back at the review, I'm glad to see that I meticulously documented the strong effect the book had on me because I've only read it once but I recall that it struck me powerfully. As I wrote back then, "Upon first rendering, it's a glorious flash of light but it is necessary to approach the material again and sit in its glow for a time. This is extremely powerful, illuminating stuff."

Elsewhere I described it as "worldview-changing" and now I'll stop hurling out praise and show you what the hell is so special about it. Keeping in mind that Carl Jung was an accomplished physician and scholar who had seen thousands and thousands of patients in his career, he was also (perhaps resulting from his deep involvement with the abyss of the unconscious) keenly sensitive to psychological and spiritual matters and had some very interesting things to say about ghosts, what they are, and why they might exist. The way he sees it, when the psyche or soul leaves the physical body, it also leaves the realm of space and time which is the realm of duality or opposites. Jung feels that all knowledge can only be gleaned from within the physical life, the realm of opposites and contradictions, black and white, up and down, etc. Therefore the spirits and other paranormal phenomena involving deceased persons arise from the fact that they are seeking new knowledge. As he writes on page 308:


"Apparently, the souls of the dead 'know' only what they knew at the moment of death, and nothing beyond that. Hence their endeavor to penetrate into life in order to share in the knowledge of men. I frequently have a feeling that they are standing directly behind us, waiting to hear what answer we will give to them, and what answer to destiny."

That sounds a little spooky or perhaps even a little bit silly. It is true that Jung had a major falling out with his early mentor Sigmund Freud because of such paranormal matters. It is also quite true that Freud was far too narrow-minded and dogmatic by the time Jung came into his life. This book tells the whole story of Jung and Freud's relationship but it's only after that early chapter that the story starts to really take off. To put it in very rudimentary terms, Freud never went deep enough. He was entirely focused on what Jungians call the personal unconscious, which is basically the entire galaxy of memories and experiences from someone's life. Perhaps Jung's greatest contribution to the knowledge of humanity is his idea of the collective unconscious, the unfathomably vast and deep layer that rests underneath (so to speak) the personal unconscious. This is the realm of ancestral experiences, archetypes from the earliest stages of human evolution (if not somehow before that), the body's consciousness, the species' consciousness. It is a realm of timelessness, when you get right down to it. For all we know, there is no beginning to our psyche. It goes all the way down to the earliest forms of life which emanated from the earth which emanated from the sun which emanated from the remains of other exploded suns which emanated from the remains of the early universe which emanated from the remains of... see what I mean?

What makes this book so goddamn spectacular is that Jung didn't simply treat patients who were troubled by the collective unconscious, nor did he simply write treatises about it----the man experienced it! He descended into the deepest depths of experience, only he had already developed a crude map to make his way through the dark cave. His "Confrontations with the Unconscious" (the title of the chapter in question) began, fittingly so, directly after his break with Freud. As he explains:


"It is of course ironical that I, a psychiatrist, should at almost every step of my experiment have run into the same psychic material which is the stuff of psychosis and is found in the insane. This is the fund of unconscious images which fatally confuse the mental patient."

My introduction to Jung's work came via Joseph Campbell, that eminent teacher of the world of myth, who was very heavily influenced by Jung and frequently mentioned him in all of his material. Throughout Memories, Dreams, Reflections, Jung perfectly, awesomely, stimulatingly expounds on that same mythic mindstate that Campbell spent his whole career dealing with. Again referring to the unconscious, Jung continues:


"But it is also the matrix of mythopoetic imagination which has vanished from our rational age. Though such imagination is present everywhere, it is both tabooed and dreaded, so that it even appears to be a risky experiment or a questionable adventure to entrust oneself to the uncertain path that leads into the depths of the unconscious."

This idea of the fractured relationship between man and his symbols is a main theme in Jung's work and especially in this book. What follows his "Confrontations with the Unconscious" is a detailing of his writings and theoretical explorations that sprung from his new insights into this murky realm. The "Confrontations" chapter is perhaps the greatest part of the book and yet it also a major turning point after which things get a little weird. Much of it is hard to believe except for the fact that Jung was so serious about his work. As much as some of it may sound like New Age gibberish to the modern mind, this is the life's work of one of the greatest scholar-physicians in modern history.

Led on by a series of dreams and visions, he built an entire house (called The Tower) based on his unconscious intuitions and carved quotes he had received from fantasies into rocks and walls around the house. It seems very much like a mandala exercise wrought large, where he is attempting to bring his physical life into harmony with the abyssal unconscious. The reader inevitably gets a little spooked out as, once Jung settles and lives in this house, many ghostly sounds, sights and other phantasms are experienced and he is led to consider the possibility of it all being a series of hallucinations. (In a later chapter he writes, "I know with certainty that something interior can seem to be exterior.")

The following chapter (the book is written mostly in chronological order covering the events of his life) details his travels around Africa, Asia, and America with plenty of great material along the way. Once he returns, we get the strangest chapter of the book detailing a wild hallucinatory episode in Jung's life that occurred when he broke his foot and then had a heart attack in quick succession. These personal disasters lead to vivid experiences of delirium and visions as he approaches the brink of death. Most of this chapter is recounted in Stanislav Grof's excellent book The Ultimate Journey: Consciousness and the Mystery of Death. What I found most striking about this whole episode was the new perspective Jung had on life once it was all over. Page 297 details this in beautiful passages that seem to perfectly coincide with the main message of James Joyce's books: an affirmation of life. I think I've already offered plenty of praise for this book and thus you should by now realize the richly rewarding reading experience one gets from it, so I will here close with one of my favorite passages.


"Something else, too, came to me from my illness. I might formulate it as an affirmation of things as they are: an unconditional 'yes' to that which is, without subjective protests---acceptance of the conditions of existence as I see them and understand them, acceptance of my own nature, as I happen to be. At the beginning of the illness I had the feeling that there was something wrong with my attitude, and that I was to some extent responsible for the mishap. But when one follows the path of individuation, when one lives one's own life, one must take mistakes into the bargain; life would not be complete without them. There is no guarantee---not for a single moment---that we will not fall into error or stumble into deadly peril. We may think there is a sure road. But that would be the road of death. Then nothing happens any longer---at any rate, not the right things. Anyone who takes the sure road is as good as dead.

It was only after the illness that I understood how important it is to affirm one's own destiny."