Following a sudden shift of surroundings when I moved (for the 5th time in 4 years) four weeks ago, I seem to have fallen off the blogging groove. I try now to climb back onto it as the baseball season approaches, the NBA season runs on by, and I absorb books and music much too fast for me to stop and compose reviews about them. So, in the interest of getting the ball rolling, today we'll do what any good blog does and take a look at some other people's work that I've enjoyed around the web.

First, I've got a little treat for you:


Not very long ago, a large conglomerate of talented bloggers and sportswriters gathered together to launch a new website featuring interesting, perhaps "high-brow" pieces on sports and its surrounding culture. Led by Free Darko mastermind Bethlehem Shoals, the site (called The Classical) seemed a perfect rival to Bill Simmons' recently launched Grantland project. As someone who prefers Shoals' writing style to anything Simmons could possibly devise, I had very high hopes for this endeavor but The Classical has, in my eyes, gotten off to a slow start. In the meantime, Grantland has gathered awesome writers (Jonah Keri, Rany Jazayerli, Bill Barnwell, Katie Baker, Jay Caspian King) covering every sport and I can't help but check out their content almost every day.

With the locked-out basketball season finally starting to get its wind and a fresh baseball season showing its first signs of life, The Classical is responding with some excellent pieces. I don't want this post to turn into a collection of nothing but Grantland and Classical pieces but... they've written a bunch of great stuff lately. These works in particular have really grabbed my attention:

- the Miami Marlins are a totally revamped organization with flashy colors, expensive new players, a star slugger who just changed his name from "Mike" to "Giancarlo," and perhaps the weirdest baseball stadium we've seen emerge in the last 30 years or so. Eric Freeman, who normally covers the NBA game, put together a piece about these new Marlins and examined what exactly it is they represent as a baseball team. As he writes:


"the Miami Marlins have become a must-watch team without even earning interest as a World Series dark horse. At a time when a franchise’s long-term plans increasingly depend on sound financial assessments and the power of patience, the Marlins seem to have adopted “making a splash” as an organizational ethos. What they’ve created, even if largely by accident, is a team of obvious talent, led by strong personalities, playing for an organization that has disregarded expectations of what a baseball game should look like for fans. The Marlins scream to be considered as an experience in a way that no MLB team has for a long time."

They certainly look like an exciting team. That Jose Reyes opted to join them after they've stepped on the Mets' throats for the last few years makes me a certified non-fan. Will definitely be fun to hate them, though. They ought to be pretty damn good (if I disagree with anything Freeman says it's his assertion that they aren't a World Series contender).

- One of the strangest stories of the Hot Stove season was the revelation that Cleveland Indians pitcher Fausto Carmona is not, in fact, Fausto Carmona. His age was three years off this whole time, too. This is not uncommon with players from the Dominican Republic but Carmona (real name Roberto Heredia) has much more to his story. Ben Tausig weaves the tale in one of the best-written pieces I've read at The Classical site so far. 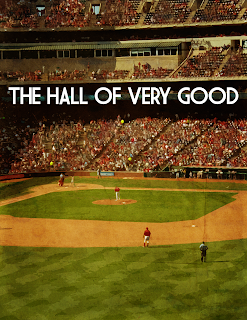 - Mass conglomerates of talented writers seems to be the theme of this post thus far so here's another bit. Two graduates of the Baseball Prospectus School for the Sabermetrically-Inclined, Marc Normandin and Sky Kalkman (what a great first name), have put together a dauntingly impressive team of over 30 writers (pretty much every great baseball writer in existence today) so that they can all write one massive e-book called The Hall of Very Good covering the galaxy of retired baseball players whose careers exist on the fringe of the Hall of Fame. It began as a KickStarter project but they immediately reached their financial goal and are now tacking on more writers with each bit of extra cash they collect. Looks like a monumental endeavor, I just hope they release it in physical book form as well because I'm not quite into to reading books electronically yet. Anyway, go here to read all about the project or check out The Classical's interview with Marc Normandin who's putting it together.

- over at the aforementioned Baseball Prospectus, one of my favorite baseball writers, Steven Goldman, is hanging it up after ten years as Editor-in-Chief and moving on to another site. Goldman pens essays with more knowledge, style, wit and elegance than just about anybody writing about sports nowadays. Despite my vehement disdain for the Yankees, I've been keeping up with his regular coverage of the team over at Pinstriped Bible for many years now simply because his writing is enjoyable to read. While still contributing to Pinstriped Bible, he's leaving Prospectus for the website Bleacher Report which I've never really been very fond of though, admittedly, they're trying to bring on more and more quality talent.

- Ted Berg, a gifted writer who covers my very own New York Mets, put together a poignant little post on a renewed perspective he attained of fringe major leaguers while watching a nondescript pitcher sitting in his car on the phone with family/friend/pizza guy/whoever. Highly recommended reading.

- Now that baseball has elected to add two more playoff teams into the postseason mix, Rob Neyer looks at both sides of the argument. The main naysayer is Joe Sheehan, an original baseball thinker who always presents a strong debate. I have a lot of respect for Sheehan and I know his argument will inevitably come back to bite the baseball decision-makers, but I also know that I'll enjoy the extra baseball this year and added intensity of the pennant race now that a new slot has opened up for teams to chase.

- My old friend Jay Jaffe (my first 'published' piece originally appeared on his blog in 2006) has been writing a series at Baseball Prospectus examining the sudden shift in baseball's defensive spectrum. He discovers that left fielders have, as a whole, kinda sucked lately. This is a strange development after decades of the left corner being a power spot (Ted Williams, Barry Bonds, Stan Musial, Rickey Henderson, Manny Ramirez, the list goes on). While the sabermetric brigade of baseball-bent brains continues its relentless bombardment of the old (crusty and ignorant) order of mainstream sports coverage, Jay finds himself on cable TV holding his own in dialogue with Larry Bowa and regularly appearing with former ESPN anchor Brian Kenny (a long-time sabermetrically-inclined mind) discussing all things baseball. I'm very proud. It's surreal to see someone you've known personally suddenly appearing on MLB Network. You can watch Jay and his impressive mustache do their thing here.

One last quick baseball note: I've been devouring the new Baseball Prospectus 2012 and will hopefully put together a brief review of it here soon. The verdict thus far: lots of mistakes and downgrades from past editions but still a terrific tome.

- The aforementioned Bethlehem Shoals writes on the speed (or "wavelength frequency" as I like to call it) of the NBA game in comparison to other popular sports. The man has a way with words and making meditative essays so go check it out.

- I never got to put together my thoughts about Linsanity when it was first booming even though, as a lifelong Knicks fan, I watched virtually every game (before, during, and after his arrival). We can get to that in my second-half NBA preview to come soon, but for now here are two pieces on Jeremy Lin that I found worthwhile: Jay Caspian King and Rembert Browne both discuss the racial angle of the whole event with perspicacity. NBA X-and-O scientist Sebastian Pruiti, whose work is golden for any devout NBA fan seeking to understand the game, dissects the Knicks' new floor alchemy stemming from their mixing superactive Lin and the recently-returned, selfishly slow-paced Carmelo Anthony together. In the time since that piece was published, the Knicks have gotten smoked twice in Texas while their offense often stagnated and Carmelo hoisted dumb shots. That's gonna have to stop.

- Friend of the blog and University of Michigan instructor Dr. Yago Colas will be in town here in Austin this weekend to deliver a talk all about his famed "Cultures of Basketball" college course as part of the South-by-Southwest (SXSW) event. Takes place this Sunday morning, March 11th at 11 AM at the Driskill Hotel. Here's a description:


In this presentation, I will share the story of a groundbreaking pedagogical experiment that quickly gained national and international attention: teaching “Cultures of Basketball” at the University of Michigan. Inspired by my lifelong love of the game and informed by my scholarly interests in the role that stories, particularly informal stories, play in shaping our daily lives at the individual and collective level, “Cultures of Basketball” quickly surpassed my wildest expectations. Its appearance in university course listings provoked hundreds of student e-mails begging for one of the 24 spots in the course. The impromptu course diary I posted on my blog drew the attention of local newspapers, ESPN.com and other major online venues in this country and abroad, as well as hundreds of readers per day. Finally, the in-class experience provided challenges unlike any I’d faced in my 20 years of university teaching: negotiating the balance between formality and informality, emotional experience and intellectual inquiry, student and student-athlete (students included 8 members of Michigan’s men’s basketball team), the freedom to openly explore uncharted pedagogical ground and the imperatives of academic integrity, all while making my first foray into blogging and micro-blogging social media.

Yago has written regular lengthy recaps of the course, waxing philosophic about the game of basketball and life over at his blog Go Yago! and he also contributes to The Good Men Project with deep ruminations on existence as a male in modern society. Worth mentioning: Dr. Colas used my very own work (the James Joyce-Salvador Dali study I completed last year called "Thought Through My Eyes") in a recent Comparative Literature class to illustrate Joyce's A Portrait of the Artist as a Young Man for students. Though I still haven't gotten the paper published anywhere yet (the James Joyce Quarterly rejected it), the fact that it's being used a discussion point in a college course (especially a cool college course like this one) is definitely a dream come true.
Posted by PQ at 7:05 PM