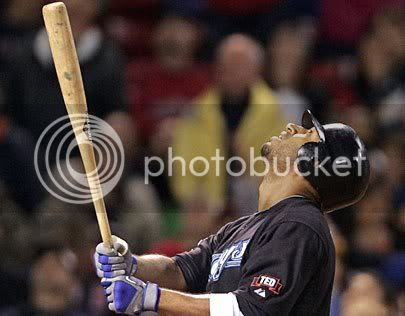 Ever since reading Moneyball back in 2003, I've been interested in following the chess moves of the notably intelligent, crafty GMs in baseball. Right around that same time, teams started hiring so-called whiz kids (young, Ivy League-educated baseball geniuses) to run their teams like Theo Epstein for the Red Sox, Paul DePodesta for the Dodgers, Jon Daniels with the Rangers, Josh Byrnes and the Diamondbacks, and Andrew Friedman for the Tampa Bay Rays. I'm fascinated by these young minds and usually follow their cunning schemes with precise attention, trying to figure out why they took that player or traded that aging slugger.

About a month ago I read a great interview with the Blue Jays' new hot shot general manager, Alex Anthopoulos, which sparked up my interest in that team and the plots Anthopoulos might have in mind to drag them back into contention again in a fiercely competitive AL East division.

Yesterday he made a trade that has the whole baseball analysis world lavishing the young executive with superlative praise. He somehow managed to get rid of arguably the worst contract in baseball, Vernon Wells' $86 million over the next four years, bestowed on the centerfielder by Antopoulos' predecessor, J.P. Ricciardi. Wells did manage to put up a strong showing at the plate last season (127 OPS+) but, going into his age 32 season, he's no longer a very capable centerfielder and yet he's due to collect $21.5 million per year over the next four years. That's more than the Phillies are paying ace Roy Halladay. FanGraphs ran some numbers and calculated that Wells' projected performance should be worth somewhere around $37-38 million over that span, instead he'll be getting $86 million!

Somehow, the Los Angeles Angels of Anaheim not only agreed to take Wells and his albatross contract off the Jays' hands, they also gave up a couple of pretty good pieces in catcher Mike Napoli and outfielder Juan Rivera. Napoli never really seemed appreciated in Anaheim but he's what I'll call a Bill James Abstract Favorite; a hitter whose assets are his ability to draw lots of walks and hit for power, basically a Three True Outcomes hitter. Focusing on his shitty batting average (.238 last year) or propensity for strikeouts (137 last year in just 510 at-bats) obscures the fact that he's a highly productive hitter because of his power and patience. He should fit right in on this slugging Blue Jays team.

Rivera is really nothing special at this point though he does have a little bit of power (in the game I attended up in Anaheim last summer he hit a moon shot) and maybe the homer-happy Jays can tap into that the way they did with Jose Bautista last year when he exploded for 54 homeruns.

I'm not really sure how Vernon Wells is supposed to fit on this Angels team. He's a lot like Torii Hunter in that he can hit a little bit but not enough to make sense as a corner outfielder, but he's too slow to cover ground in centerfield anymore. Hunter got bumped from center in the middle of the season last year for speedy Peter Bourjos, so I assume Wells will probably split time between left field and DH. Twice already (FanGraphs and Keith Law) somebody has referred to this as a "desperation move" on the Angels' part because they had been chasing after the big free agents all winter and fell short. Taking on an $86 million obligation and an aging mediocre outfielder really doesn't do them much good.

As for the Blue Jays, dumping off that chunky contract from their books puts them in a great position to stack up for serious battle against the AL East elites. Probably not this season, but by 2012 that entire division will feature contenders.

*   *   *
The division also got a whole lot more interesting yesterday when the Rays, who had been seemingly staying quiet all winter and let some great players go, signed two ex-Red Sox stars to bargain bin deals: Johnny Damon for $5.25 million and Manny Ramirez for $2 million. Both guys are approaching 40 but they can both still hit and should be comfortable jumping back into the division where they had the most success. They won a World Series together in 2004 when the Red Sox ended an 86-year drought for the franchise. Now, they'll be playing regularly against a completely revamped Red Sox powerhouse and, of course, the Yankees. 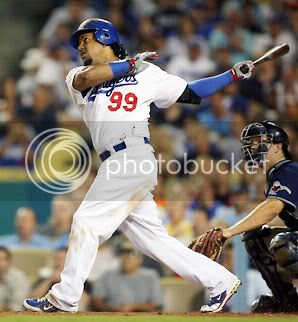 Manny was flaky, unproductive and possibly malingering for a crappy Dodgers team last year but if he's healthy, you can bet he'll still hit. He's one of the greatest hitters of all time and one of my favorite players to watch (not only because he's such a character but because the man can still hit with the best of them). Getting him at $2 million is an absurd bargain.

Damon had a tough time in Detroit's big ballpark last year (8 homers) but he can definitely still get on base and ought to be a tough out in that deep Rays lineup. I predict that these pick-ups won't be quite so big a deal in the AL East race because it's pretty much inevitable that both players will get banged up and spend some time sitting out. But it will sure as hell be fun to watch.
Posted by PQ at 7:50 PM