My work days in San Diego are officially over. My last day was Friday. Having spent more than 2 years at the same job, it was a little sad to leave but everybody (all four of us) pretended nothing different was happening and just kinda hid the emotions we were all having. What's funny is that, without exception, I dreaded every day I had to work there, I woke up in the morning furious and wanting to kill my alarm many times (actually, this has occurred often throughout my entire work career), but the last couple days of work were kind of bittersweet. I was appreciating every little thing and thinking "oh man, I'm gonna miss talking to the mailman everyday." When stuck in the daily grind with no escape in sight, I tended to focus on the negative, but when it all came to an end I was almost overwhelmed by the simple things.

Now I'm back out floating in space. The future is a mystery. I do know that we are moving to Austin, Texas at the end of the month and I've got a bunch of things to do in order to prepare. As the moving day approaches, I'm starting to feel that same nostalgia for San Diego as a whole. That the weather has been absolutely perfect (cloudless sky, mid-70s) the last few days doesn't help matters. I'll probably write a big post on all the things I'm gonna miss about this city. But, for now, I'd like to wake this blog up with some basketball talk. 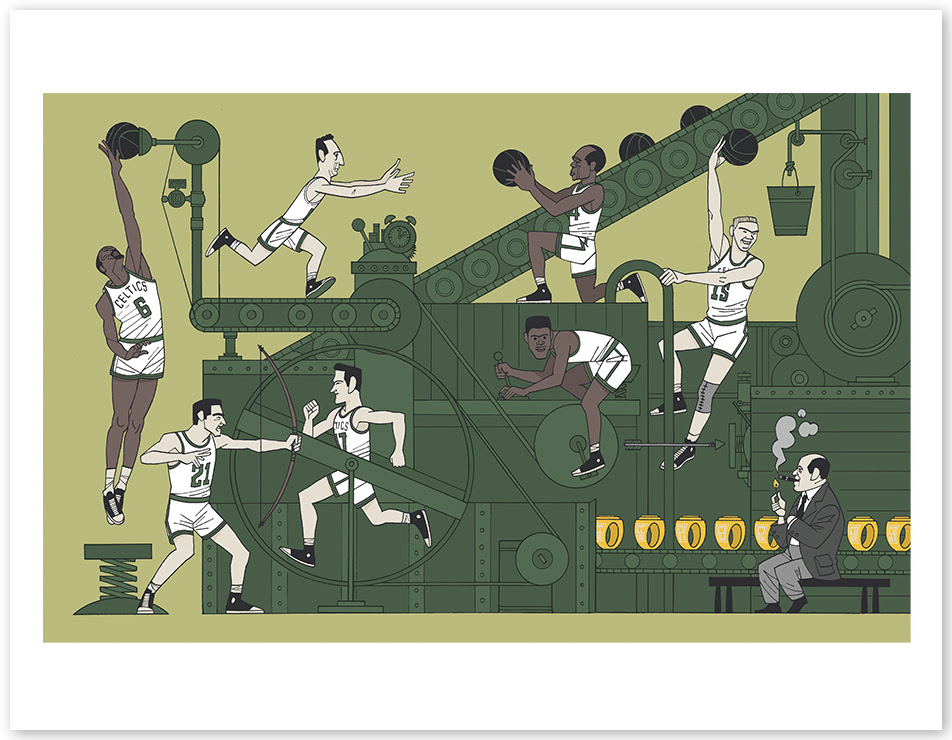 First, though I haven't really gotten to read much of it yet because I've been engrossed in Bill Simmons' b-ball book which I received at the same time, FreeDarko's The Undisputed Guide to Pro Basketball History has been getting rave reviews and I've been showing off its visuals to anybody I come across, including my pops who took it upon himself to try to name every player in the book's collection of artwork. I was particularly impressed that he successfully named every player in the Red Auerbach Celtics picture (capping it off with a proud "Bill Sharman! Because he's a sharp shooter...").

Recently I learned that Dr. Yago Colás, a professor at the University of Michigan, will be using the colorful tome as the key textbook in a course he is teaching called "Cultures of Basketball." That there's a college class all about basketball is awesome enough but using the FreeDarko book as a textbook is spectacularly cool and Dr. Colás is actually posting blog entries at his website documenting each day of the course. His first two posts have been very long but they're definitely worth a read. Here's a sample from Day 2 of the course, when the consideration of basketball as religion sparked lively discussion:

They came out with all kinds of great stuff: basketball involves ritual, basketball is a haven from earthly troubles, basketball involves superstition and the appeasing of higher powers, basketball awakens passions of love and hatred, basketball inspires devotion. Basketball, a couple of people collectively figured out, could even be seen as just one of the great religions alongside other sports like baseball, football or soccer as others. Ultimately, they decided, just as with “real” religions one can get caught up on the differences and become antagonistic and hostile or one can focus on the basic underlying commonalities. They talked about how you create value-systems through basketball. They talked about their own experiences as players and fans. We made fun of Lakers’ fans.  (Even the Lakers' Kid admitted Lakers' fans were insane, explaining that in a recent fan forum thread Lakers' fans said that if they had one player with which to start a franchise they'd choose Andrew Bynum over Blake Griffin.)   We felt bad for Cleveland fans: how would you feel if the Messiah abandoned you cause you were cold and a loser? We enjoyed making the obvious observation, with verbal winks at each other, about the Nike “Witness” campaign and about Lebron’s “Chosen One” SI cover.


We also talked about whether there was any drawback to seeing basketball as a religion or, more precisely, to experiencing it as a religion. This led to a discussion of perspective, with some students feeling that it was important not to lose sight of the fact that basketball is, after all, a game and not as encompassing or important as religion.  While in some ways this is obviously so (and I said so), I also wanted to resist the point. I think partly I felt a peevish resentment at being brought back down to earth, as though I was being told that it was time to get serious. But I also felt that there was an intellectual point -- at least a matter of rigor – at stake.

I would also add on to that point that basketball has its own gods, demigods, angels, martyrs, tortured souls (as Lamar Odom was compared to Job in the first FreeDarko book), tricksters, master builders, and so on. Basically, this is exactly the perspective (basketball as mythology/religion) that was so beautifully expounded in FreeDarko's excellent first book, The Macrophenomenal Pro Basketball Almanac.

The head FreeDarko honcho, who goes by the pen name Bethlehem Shoals, has been writing a regular column, "The Works," on the latest happenings of the NBA over at the AOL Fanhouse website which was being linked to on my sidebar to the right. Unfortunately, the AOL sports site has just recently been taken over by The Sporting News and now a wonderful writer like Shoals will soon be kicked to the curb. Pretty scary for me as an aspiring writer to see the mastermind behind two undisputedly brilliant books saying things like, "Don't hesitate to get in touch if you know of any writing or editing work!"

Not sure when the last column will be but they've got a new one up today all about LeBron's latest machinations and the great debate of Blake Griffin vs. Kevin Love, two young power forwards who've been tearing shit up thus far this season.

Lastly, here's a video I came across via FreeDarko's twitter page, it was apparently filmed by Ron Artest's younger brother Daniel, an NYC playground legend and professional player overseas:

And here's the highlights of Blake Griffin's stomping of the Indiana Pacers last night: