Since we've had three straight no-hitters that have all occurred on the night of the full moon (and because no-hit bids are happening often enough) I am predicting that we will see a no-hitter on Tuesday night August 24th which is a full moon. But who will throw it? I've identified some potential candidates out of the moundsmen who are scheduled to pitch that night. We can look at the batting average (since we're talking about a no-hitter, not necessarily a perfect game) of the opposing team and the batting average allowed and overall dominance of the starting pitcher. Keep in mind he'd also have to be a guy who can go the full 9 innings without getting pulled for running up a high pitch count (although that didn't stop Edwin Jackson two full moons ago when he threw 149 pitches).

We've actually got a few strong candidates pitching that night. 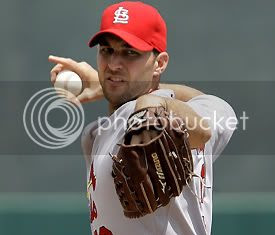 Most likely:
Adam Wainwright vs the Pittsburgh Pirates

By far the strongest candidate to throw a no-no on Tuesday, Wainwright is one of the most dominant pitchers in the league right now. He leads the NL in ERA and WHIP, ranks behind only Roy Halladay with his 5 complete games, and has the 4th most strikeouts in the league. He is facing a Pittsburgh Pirates lineup that has the second-worst batting average in all of baseball. 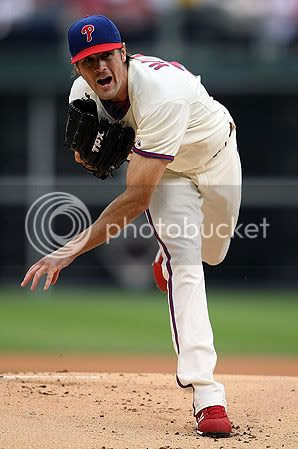 Hamels had a game against St. Louis last month in which he allowed only 2 hits in 8 innings and before his most recent start (a clunker against the Giants) he had a string of 3 consecutive dominant games, striking out nearly ten per game during that span and pitching into the late innings each time. The Astros as a team are batting .246 on the year (ahead of only Pittsburgh in the NL) even though they've actually played a bit better of late. If it's not a no-hitter, it should still be a pretty dominant game for Cole Hamels.

R.A. Dickey vs Marlins, Josh Johnson vs Mets
The knuckleballing sensation known as R.A. Dickey nearly threw the first no-hitter in Mets history last week, giving up only 1 hit (to the pitcher Cole Hamels) while throwing a complete game. The Marlins rank in the bottom third in the majors with a .255 batting average and have been no-hit already this year but they've got plenty of threats in their lineup, particularly Hanley Ramirez. While Ramirez is having a subpar season by his own standards (117 OPS+ after three seasons above 140) he's still an excellent hitter and, as the leadoff man, will be granted at least 3 chances to hit Dickey's knuckler.

Opposing Dickey and the Mets will be the towering (6 foot 7) ace for the Marlins, Josh Johnson. For most of the year Johnson has been nearly untouchable but he's slowed down recently and was even knocked out of a game in the 4th inning by the Reds. The Mets are pretty bad in the batting average department (.248) and in Johnson's 12 innings against them so far this year they've batted just .182 against him. They've been pretty pathetic at the plate lately, culminating in a weak showing in Pittsburgh. They were held to 1 run on 5 hits earlier today against the Pirates' Zach Duke. Should be an interesting pitcher's duel in Queens.


Gio Gonzalez vs Cleveland Indians
He's prone to wildness so he might rack up a high pitch count but he still has the potential to dominate, especially against a flimsy Cleveland lineup (they were the victims in the famous Armando Galarraga perfect game incident). Opposing hitters are batting just .227 against Gonzalez this year.


Not likely but certainly possible:


Josh Beckett vs Seattle Mariners
Beckett hasn't had a good year at all so far. While his strikeout and walk numbers are fine (8 Ks and 2 walks per 9 IP), he's been shelled for an OPS against of .856. But on this night he'll be facing the absolute worst lineup in major league baseball. The Mariners are hitting a pathetic .238 as a team.

Gavin Floyd vs Baltimore Orioles
I see Floyd as the wild card of the group. He's been hit hard in his past two starts and these Baltimore Orioles he'll be facing are playing much better than the lowly O's I saw earlier this year at Petco. Floyd has occasionally put it all together and pitched some dominant games this year including a game at Wrigley in which he had a no-hitter going with two outs in the seventh inning. I don't think he'll get one against Showalter's boys but he belongs on this list as someone who might do it.

Ervin Santana vs Tampa Bay Rays
Nothing against Santana, but this is just kind of a joke because the Rays have already been no-hit twice this year and once last year. In all seriousness though, it is definitely not out of the realm of possibility that the Tampa Bay Rays, who might be the best team in major league baseball (or, at worst, the second-best behind the Yankees), will go hitless in a game for the third time this season. Santana has three complete games already this year and has been pretty stingy in his two most recent starts, giving up 4 hits or less in both games. It would be a memorable and historic event if the Rays were the victims of a no-hitter again but perhaps not as strange as having four consecutive no-hitters occur on the night of a full moon.
Posted by PQ at 12:28 AM