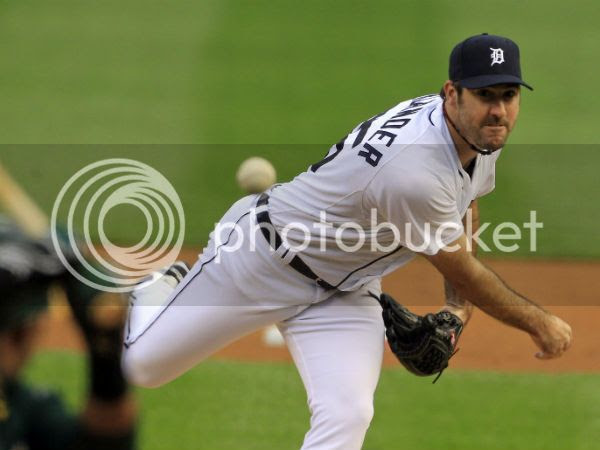 Well, that was fun.

The first round of baseball's playoffs provided just about the maximum possible amount of excitement with all four series requiring the full five games to be decided. All four series also featured at least one memorable game, while the San Francisco Giants managed to become the first team in the history of the sport to come back from a 2-0 series deficit by winning three straight games on the road.

There was a surprising amount of symmetry to the whole thing. In the American League, powerhouse favorites Detroit and New York saw surprise Cinderella teams (the Oakland A's and Baltimore O's) fight back to stave off elimination until respective aces Justin Verlander and C.C. Sabathia laid the underdogs to rest with dominant Game 5s. In the National League, the Giants completed an epic comeback by outlasting their opponent in a tense deciding game while the Cardinals had perhaps the greatest single-game comeback in postseason elimination game history---they trailed 6-0 (on the road!) and never stopped battling through each at-bat until they eventually broke through to first tie the game and then take a two-run lead, doing so in successive 9th inning at-bats while down to their final out.

Now we're left with an intriguing quartet of experienced postseason squads battling it out for a shot at the World Series. The Cardinals and Giants are our last two World Champions, while the Tigers and Yankees are about to begin their third head-to-head playoff matchup of the last 7 years. Here I'll give my quick rundown of the AL series (which begins tonight) and then later we'll take a look at the NL.

A rematch of last year's Division Series which Detroit won in 5 games, the two teams also matched up in the Division Series back in 2006. I attended Game 2 of the latter series alongside friend Jay Jaffe (who now writes the excellent "Hit and Run" blog for Sports Illustrated), witnessing Verlander defeat the Yanks in the Bronx on their way to the World Series (where they'd lose to the Cardinals).

This time around, things ought to be even more tense and exciting as it's a full seven-game series with the AL pennant on the line. Before the season, these two were good picks to make it to the ALCS but six months later their pedigrees are not quite what we expected. The Tigers underachieved all season, requiring a swift collapse by the first-pace White Sox to even make it into the postseason, while the Yankees barely eked past the Orioles both in the regular season and in the first round of the playoffs where their offense completely stalled.

Having just used their aces, Verlander and Sabathia, to ensure advancement to the next stage, both teams won't have their best pitchers on the mound until Game 3 in Detroit. Thus, the first two games in New York might feature some fireworks as both teams battle it out at homerun-friendly Yankee Stadium.

The problem for the Yanks is that their offense has suddenly sputtered, with Robinson Cano, Curtis Granderson, A-Rod, and Nick Swisher all performing terribly in the Baltimore series. To beat Detroit, they're going to need big contributions from (at least) lefties Cano and Granderson, particularly against a mostly right-handed Detroit pitching staff. Based on the lineups we've seen him use so far, New York manager Joe Girardi may opt to bench Alex Rodriguez in favor of Eric Chavez and/or Raul Ibanez, both lefties with good numbers against righties.

For Detroit, despite winning just 88 games (after posting 95 last year), this might be the best iteration of the team they've had since Jim Leyland took over as manager in 2006. Yes, their defense is a major weak spot with overly plump guys seemingly all over the field, but they've got a very deep pitching staff that racks up lots of strikeouts (Verlander and Max Scherzer finished in the top two spots for Ks in the AL) leading to less reliance on their fielders. Offensively, this is as good a supporting cast as Miguel Cabrera has ever had in the Motor City. Cabrera, of course, is quite possibly the best hitter on the planet (though not the MVP) and promises to play a major role in this series but now he's accompanied by certified masher Prince Fielder who's still in his prime and doesn't have much of a platoon split, which ought to give the Yanks late-inning match-up troubles. They've also got ex-Yankee farmhand Austin Jackson atop the lineup coming off his best season---formerly a strikeout machine who made too many outs, the 25-year-old Jackson has cut down on his Ks while vastly improving both his power and plate discipline, making him a perfect table-setter for Cabrera and Fielder. Much to my surprise, Andy Dirks has even turned into a pretty good hitter, giving the Tigers a formidable balance throughout the lineup.

It's a very tight match-up between the two teams overall. Pitching-wise, they allowed almost the exact same number of runs (Detroit 670, the Yanks 668) with similar strikeout and walk numbers. They've both got deep bullpens, though the Tigers' cartoon character of a closer, Jose Valverde (aka "Papa Grande"), represents a major weak spot.

We're guaranteed to witness some close games that aren't decided until the later innings and with home-field advantage, I can easily see Papa Grande costing the Tigers a game or two. Despite this, I think the combination of Verlander and a deeper Detroit offensive attack will be too much for the reeling Yankees to handle in a seven-game series. My pick: Detroit in six.
Posted by PQ at 3:44 PM