Having already written pretty extensively about A Portrait of the Artist as a Young Man so far on this blog, I'd like to now share a bit about the environment and reception of James Joyce's first novel. 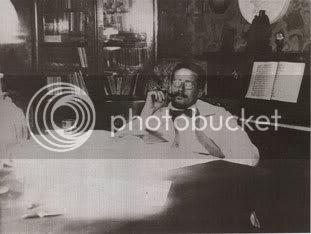 The book which Joyce had labored on (writing it, scrapping it, and then completely re-writing it) over a period of ten years (1904-1914) first appeared to the world in serialized fragments in a London literary magazine called The Egoist. In autumn of 1913 the magazine's literary editor, Ezra Pound, wrote a letter to Joyce and asked him to submit some of his writing to be printed in the "new and impecunious" magazine. Joyce sent his novel A Portrait of the Artist as a Young Man and the short-story collection Dubliners that he'd been trying, with gruesome results, to get published for almost ten years. Pound was highly impressed and organized to have Portrait published in serial form beginning with the issue on February 2nd, 1914 (Joyce's birthday).

After appearing in The Egoist from February 1914 to September 1915, the book was rejected by every publisher in London to whom it was offered. They thought it was dirty and offensive. The Egoist's editor (and lifelong Joyce patron) Harriet Shaw Weaver then decided to help out by having it published in book form, setting up the Egoist Press on her own expense for this very purpose, but then the printers actually refused to print it. It was finally published in New York by B.W. Huebsch (later called Viking Press) in December 1916. The Egoist then imported printed sheets from America and, in February 1917, published the first English edition of 750 copies which was sold out within a few months as glowing reviews started trickling in from the likes of Ezra Pound and even H.G. Wells.

But, of course, one of the reasons Joyce had so much trouble getting the book published in the first place was because his work was so far ahead of its time and thus many of the critics and reviewers simply didn't get it. Today, I came across a comical collection of reviewer comments that was originally compiled by The Egoist in 1917, here are some of them exactly as they appeared in the magazine's June 1917 issue.


James Joyce and His Critics:
Some Classified Comments

Caution: It is very difficult to know quite what to say about this new book by Mr. Joyce. --Literary World

Drains: Mr. Joyce is a clever novelist, but we feel he would be really at his best in a treatise on drains. --Everyman

Cleanmindedness: This pseudo-autobiography of Stephen Dedalus, a weakling and a dreamer, makes fascinating reading... No clean-minded person could possibly allow it to remain within reach of his wife, his sons or daughters. --Irish Book Lover

Beauty: There is much in the book to offend a good many varieties of readers, and little compensating beauty. --New York Globe

The most obvious thing about the book is its beauty. --New Witness

Realism: It is a ruthless, relentless essay in realism. --Southport Guardian

To put the literary form of rude language in a book makes some authors feel realistic. --Manchester Weekly Times

Mr. Joyce aims at being realistic, but his method is too chaotic to produce the effect of realism. --Rochester (New York) Post-Express

Mr. Joyce is unsparing in his realism, and his violent contrasts--the brothel, the confessional--jar on one's finer feelings. --Irish Book Lover

Wisdom: Is it even wise, from a worldly point of view--mercenary, if you will--to dissipate one's talents on a book which can only attain a limited circulation? --Irish Book Lover

Imagination: He shows an astonishingly unCeltic absence of imagination and humour. --Bellman (U.S.A.)

Religion: The irreverent treatment of religion in the story must be condemned. --Rochester (New York) Express

Nowadays, the book is considered a classic and the consensus is that it's undeniably earth-shatteringly awesome. The Modern Library ranked it as the third greatest English-language novel of the 20th century (behind Joyce's Ulysses #1 and The Great Gatsby #2).
Posted by PQ at 1:08 AM