Heavy gray clouds rain down on San Diego today. It's cold, gray, soggy. The weather even gets shitty in paradise.

The days of this past week unintentionally became a series of emotional bricks placed upon my shoulders as I casually came across an increasing amount of enormously infuriating and tragic information. After viewing the new documentary film Inside Job at a movie theater down the street on Thursday night, I sat stunned and shaken up like everybody else in the theater and started discussing with my girlfriend the possibility of leaving the country to go live in France for a while. That event seemed to be the final exclamation point after a sentence of bad words but then my workday on Friday was as bleak as it's ever been. The company I work for has been falling apart like an old crusty building and yesterday an enormous foundational chunk fell, reminiscent of the crumpling buildings in the film Inception.

*   *   *
It seems the news has been consistently filled with tragic stories of police brutality, excessive force and the murder of innocent young people lately. There also continues to be a staggering number of foreclosures and people losing everything they have. I recently read that the disparity between the upper class and lower class is currently as large as it's ever been in this country's history. And I saw an article that declared some insane facts about our country's military spending, including the fact that the Pentagon consumes 80% of the individual income tax revenue. Right down the road from where I sit now, at the San Diego airport, somebody stood up to those people who now insist on either looking at or touching a man's penis (or a woman's breasts) before letting him/her cross a blockade and it caused a national stir as the man was ejected from the airport and might face fines in the tens of thousands of dollars. Abuse of power.

Perhaps the ugliest thing I encountered this week was the information and images presented to me in a video lecture by a man named Gary Yourofsky. After a highly-informative weekend in San Francisco last month, I have been reading more and more about nutrition and have been amazed at the false information that persists and permeates in the knowledge and dinner plates of most people in this country (and western hemisphere). Firstly, I have learned that there is no nutritional value in meat of any kind whatsoever. In fact, because of the high cholesterol, meat and animal products are responsible for the #1 leading cause of death, heart disease, as well as numerous cancers (especially colon cancer, a disease which claimed another young victim this morning). And I learned the very simple fact that all the animals we eat are vegetarians themselves and thus we are trying to soak up the diluted nutrients from their flesh. Of course, it'd be much easier if we just ate the plants, grains, and fruits ourselves but we're constantly told that we have to eat meat for protein, iron, calcium, etc. when in fact there is NO nutrient or vitamin that derives from an animal's body, they all come from the earth.

I also learned that cheese, as delicious as it may be (and just typing about it right now makes me want to eat it), is one of the most dangerous foods in the world because of its extremely high content of saturated fat which inevitably causes atherosclerosis and heart disease. But, wait a minute, why then would Uncle Sam want us to eat more cheese as this New York Times article says?


Dairy Management, whose annual budget approaches $140 million, is largely financed by a government-mandated fee on the dairy industry. But it also receives several million dollars a year from the Agriculture Department, which appoints some of its board members, approves its marketing campaigns and major contracts and periodically reports to Congress on its work.
The organization’s activities, revealed through interviews and records, provide a stark example of inherent conflicts in the Agriculture Department’s historical roles as both marketer of agriculture products and America’s nutrition police.
In one instance, Dairy Management spent millions of dollars on research to support a national advertising campaign promoting the notion that people could lose weight by consuming more dairy products, records and interviews show. The campaign went on for four years, ending in 2007, even though other researchers — one paid by Dairy Management itself — found no such weight-loss benefits.
When the campaign was challenged as false, government lawyers defended it, saying the Agriculture Department “reviewed, approved and continually oversaw” the effort.
Dr. Walter C. Willett, chairman of the nutrition department at the Harvard School of Public Health and a former member of the federal government’s nutrition advisory committee, said: “The U.S.D.A. should not be involved in these programs that are promoting foods that we are consuming too much of already. A small amount of good-flavored cheese can be compatible with a healthy diet, but consumption in the U.S. is enormous and way beyond what is optimally healthy.

So the government spends millions on a program designed to get Americans (the fattest, unhealthiest people ever in history) to consume more cheese. They got Domino's to put 40% more cheese on their pizza than last year.

It was with this knowledge that I then viewed Mr. Yourofsky's passionate and articulate lecture that was delivered to students at Georgia Tech University this summer. Here is one part of that lecture:


He goes on to explain that human beings share all the same physiological characteristics (very long small intestine, grinding lower jaws, well-developed salivary glands) as herbivores and none of the characteristics of carnivores. The most striking one is that carnivores have a small intestine that is relatively short and thus they can quickly push through all the decayed animal flesh whereas when a human eats meat the decayed flesh takes much, much longer to digest and our bodies can't handle that presence so our arteries clog up. That's why real carnivores (hyenas, lions, bears) don't have cholesterol problems.

On television commercials, the only food products we see are meat, cheese, more meat, extra cheese, etc. while it's quite clear that it's killing us. Add to that the fact there's an animal holocaust going on that most people purposely stay blind to. Not only do they stay blind to it but they actually eat the mutilated, murdered animals' flesh!

Thankfully, and unsurprisingly, the lead members of my favorite musical group, the Wu-Tang Clan, are outspoken vegans. Even almost 20 years since they first came out, their influence on this planet remains very strong. The Gza recently did an interview detailing his current raw food diet and how he got Method Man to stop eating meat; The Rza is also vegan and here is Masta Killa (invoking a hilarious irony with his name) talking about his vegetarianism:


*   *   *
While eating dinner before we went to the movies on Thursday, we sat watching The Story of Stuff which darkened the clouds further and I started thinking about how there are so many great documentaries these days exposing the numerous atrocities going on behind the scenes in so many different sectors. Last week, we watched another chilling documentary called Deliver Us From Evil detailing the story of a Catholic priest who molested and raped (pretty much doing every bad and disgusting thing one could think of) hundreds of children in California, was convicted and admitted to it many times but was only shifted to a different parish each time by the slithering snake cardinal Roger Mahony who somehow got off clean. O'Grady was deported to Ireland and now walks the streets a free man, totally aloof and uncaring of how many families he destroyed (O'Grady, the victims, the families, they're all interviewed in the film). 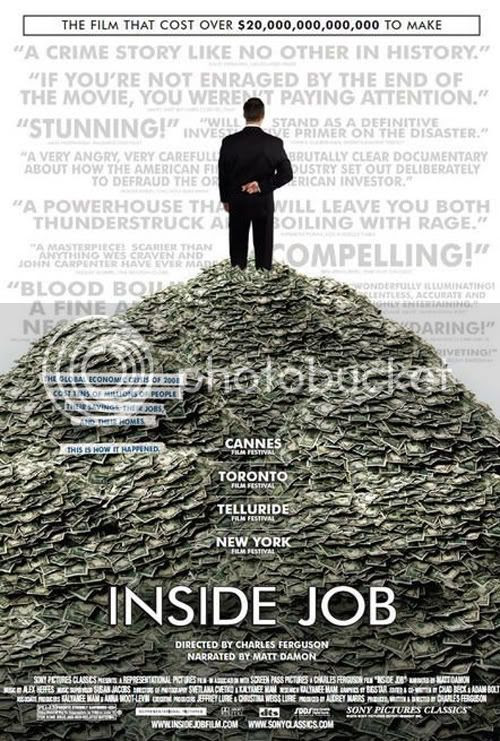 What springs to mind when I consider all of these movies is that they all perfectly and meticulously outline for us these terrible problems, but none of them detail how the infuriated viewer can do something to help, to start really inciting change. Inside Job was no different. The reviews for this film are laudatory all around and it's really an extremely well-presented movie that looks as crisp as any other major motion picture. The opening takes place in Iceland and it draws up in one's mind the image of Pandora in Avatar. The film then dives deep into lower Manhattan, Wall Street, and details the lives of these investment bankers and stock brokers who revel in cocaine and prostitution while bilking the public's money through shitty sub-prime mortgages and making tons of money trading something called "derivatives" while facing no punishment or regulation whatsoever from the government. As a matter of fact, the government is in on it because the bankers infiltrated the government without anybody calling them out for conflict of interest.

The CEOs and big wigs for the investment banks leave their posts (collecting humongous pay-outs and stock options) to go take major positions in the White House cabinet where they let their friends in the financial industry do whatever they want instead of policing them. When they're done "serving" there they move on to top positions in schools like Harvard and Columbia where they prepare the next generation of slithering lizards and remain on the payroll of the big banks as consultants collecting millions.

These people all appear in the film and have to answer for themselves but often having nothing to say, sounding like bumbling dummies caught with their hands in the cookie jar. Everybody admitted that, during the housing boom and the trading of derivatives (which are explained as basically "weapons of mass financial destruction"), they knew things would soon very quickly and easily blow up resulting in the complete collapse of the American economy. Yet nobody did anything to stop it. And when the ball fell and houses started being foreclosed, people losing their jobs, markets collapsing, these guys raked in billions. The film shows them being lambasted in front of Congress but, alas, nobody gets in trouble, nobody goes to jail, nobody even apologizes. They just keep getting richer while the environment surrounding their castles collapses.

I've seen a few documentaries in theaters (the most powerful of which was probably Why We Fight) but never before have I felt so much anger from folks around me. Everybody is fed up. Unlike most of these other documentaries I mention, this isn't exposing something terrible that's going on in some hidden corner, this is all as palpable to us as the choke in one's throat when you see a mother and daughter digging through the trash in a back alley (something I see here in San Diego too much). I urge everybody reading this to go see this new film. Like I said, it ends abruptly without offering any kind of solution other than "keep fighting" but it is imperative that we become aware of this and who the culprits are.

I found an article from a year ago describing how Goldman Sachs* (the same firm that keeps churning out more and more White House financial crooks) employees were purchasing handguns en masse as they prepared for what they see as the inevitable uprising by the public against them. Maybe we should start doing the same?


*There are many great resources about the evil of Goldman Sachs but this is a great place to start if you're interested in reading about it.
Posted by PQ at 5:33 PM