A Quick Padres vs Mets flashback 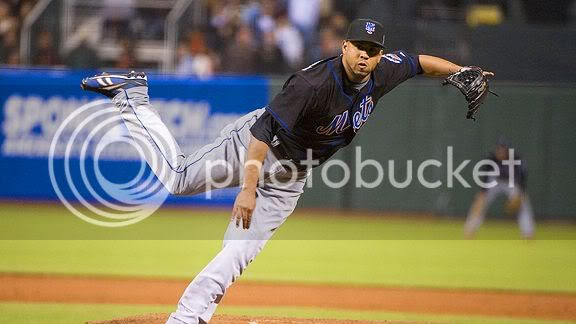 The Mets are in town to play at Petco Park for the only time this season and, watching the game right now with the clearly-past-his-prime closer Francisco Rodriguez (or K-Rod, as he's known) trying to close out the game with his team up by 3 runs, I'm reminded of the Mets-Padres game I attended last summer. It was a birthday present from my brother Billy and his (five months pregnant) wife: perfect seats just above home plate for a Friday night match between my lovable ol' Mets and the local San Diego nine.

I was in the midst of a two month sojourn working at a terrible, extremely stressful administrative office where I spent each day working with 4 unpleasant and unfriendly ladies. It was the middle-aged, possibly bipolar, zany, wealthy owner and her three young, catty, goal-driven ladies. The Witches of Eastwick. Or, more accurately (since they nearly drove me insane), Bella Cohen's whores. And I'd actually been hired to work at the place on Bloomsday.

After four weeks at a highly demanding job where the three young women I had to work with clearly didn't want me there, I was drained and heavily infected with stress. Sitting in Petco Park that night watching Oliver Perez pitch a very good game against the home team (2 hits, 2 walks, 7 Ks and only 1 run in 6.1 innings) I started to feel a very sharp pain in the back of my head where the spine meets the skull. It persisted throughout the game and any movement made it hurt. I had a constant look of strain on my face. It felt like that scene in "The Matrix" where they first plug that needle into the back of Neo's head.

K-Rod entered the game in the 9th with his team protecting a one run lead. Watching him warm up, with his limbs herky-jerkily flying everywhere, I thought of when the Mets had signed him and he how he was considered the last big piece in the Mets' championship puzzle. Now he was languishing for a 4th place team in August, trying to pitch the last inning of a meaningless win.

I had left my fun, interesting, family-atmosphere, 9-to-3 job for one that paid much much more but brought much more stress and bullshit with it. They pushed meticulousness to a degree bordering on brown-M&M insanity and, if I did anything wrong (even while in training), Bella Cohen made sure to embarrass and spank me in front of everyone. I sympathized with K-Rod, who'd left his Angels to make the big bucks and pitch for the New York Metropolitans and their demanding city.

The pain in my head persisted for the entire month of August while my health rapidly deteriorated, first with a bad cold then pneumonia before I finally quit the job on unfriendly terms. I lost weight and couldn't knock the pneumonia for weeks as I sat home unemployed and bitter, my nose raw from having to blow snot from it all day for practically two whole months.

K-Rod wasted no time in making the opposition's ballpark explode with excitement. He walked Kyle Blanks to start the inning and the next batter roped a double to score Blanks and tie the game. Now he was no longer trying to close out a win for the Mets but trying to save his team from defeat. He went to a full count on the next batter before walking him. Mets manager Jerry Manuel, in a decision that some baseballers might hyperbolically equate to public castration, made his closer issue an intentional walk to the next batter to load the bases. Still no outs and now the winning run was at third. 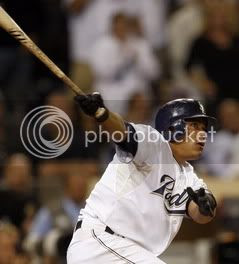 Next batter Everth Cabrera quickly fell behind: no balls, two strikes. He then battled all the way back, fouled off pitches and worked a full count. Bases loaded, full count, bottom of the ninth: baseball's densest moment of potentiality. The entire crowd was standing, cheering, gasping, anticipating. I was too. And my head was ringing and the sharp pain stinging. Cabrera executed a perfect upper cut swing and launched the ball high and deep to right field, just barely clearing the wall of the little "jewelry box" that juts into the field. A walk-off grand slam.
Posted by PQ at 12:56 AM