While tuned in to the Fox telecast of the Cardinals-Cubs game at Wrigley Field yesterday, they briefly displayed a beautiful camera shot from the Chicago River looking upon the surrounding architecture. Commentator Tim McCarver mentioned how he'd gone on the Chicago River Architecture Tour the day before and he brought up Billy Sunday, an ex-major league baseball player for the Chicago White Stockings from the 1880s who went on to become a famous evangelical Christian preacher, and how Sunday had been such a strong proponent of Prohibition and played a major role in the passing of the 18th Amendment.

This caught my attention because I remembered that James Joyce used one of Billy Sunday's fiery, wildly fervent sermons in Ulysses. It appears at the end of the 14th episode, the "Oxen of the Sun" chapter where Bloom joins Stephen and a bunch of medical students who are drinking and carousing boisterously in a hospital waiting room. It's one of Joyce's most ingenious chapters stylistically: a survey of the English language with a style that varies and grows chronologically throughout the chapter, starting with what seems like literal translations of Latin ("Some man that wayfaring was stood by housedoor at night's oncoming") moving on all the way through the centuries of prose styles from the Elizabethans to Dickens and finishing up with a sloppy amalgam of drunken slurs and street slang. The closing paragraph contains this crazy exclamation (which, I think, is mockingly made between the drunken medical students who are out at a pub at this point):


Come on, you winefizzling ginsizzling booseguzzling existences! Come on, you dog-gone, bullnecked, beetlebrowed, hogjowled, peanutbrained, weaseleyed four flushers, false alarms and excess baggage! Come on, you triple extract of infamy! Alexander J. Christ Dowie, that's yanked to glory most half this planet from 'Frisco Beach to Vladivostok. The Deity ain't no nickel dime bumshow. I put it to you that he's on the square and a corking fine business proposition. He's the grandest thing yet and don't you forget it. Shout salvation in King Jesus. You'll need to rise precious early, you sinner there, if you want to diddle the Almighty God. Pflaaaap! Not half. He's got a coughmixture with a punch in it for you, my friend, in his backpocket. Just you try it on.  (Ulysses pg 428)

The "Pflaaaap!" is the sound of vomiting. These are the last words before the absinthe-fueled nightmare hallucination that is the "Circe" episode where they all go to a whorehouse in Dublin's red light district. 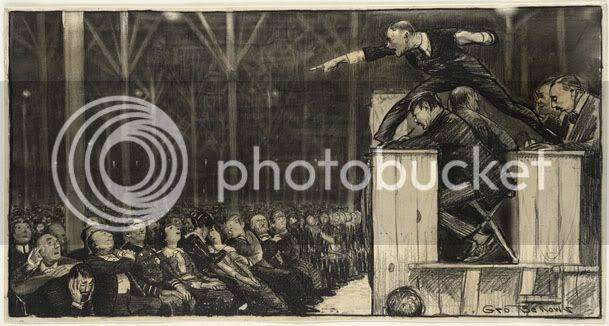 It was only fairly recently that scholars realized Joyce had taken that crazy "altar call parody" verbatim from a couple of Billy Sunday sermons which must have been transcribed in a newspaper Joyce came across. The article I found (linked above) appeared in the Joyce Quarterly in 2006 and was written by one of the editors of the Oxford English Dictionary, Peter Gilliver, who realized the connection between Joyce and Sunday while researching whether there was a precedent to Joyce's use of the adjective "peanut-brained." At the time of Ulysses' composition, Billy Sunday was at his height of fame with his animated sermons that were just as much a form of entertainment as they were evangelical calls to repent. The sermons were delivered first inside large canvas tents that Sunday actually put up himself most of the time until a heavy snowstorm in Colorado destroyed one of his tents and he subsequently insisted that towns build him temporary wooden "tabernacles" at their own expense. I highly recommend checking out Mr. Sunday's wiki page to read more about him because it's fascinating stuff but here's a little snippet:


Sunday gyrated, stood on the pulpit, ran from one end of the platform to the other, and dove across the stage, pretending to slide into home plate. Sometimes he even smashed chairs to emphasize his points.

During the 1910s, Sunday was front page news in the cities where he held campaigns. Newspapers often printed his sermons in full, and during World War I, local coverage of his campaigns often surpassed that of the war.

As for his baseball career, in his Historical Baseball Abstract Bill James lists him as the fastest player in the entire decade of the 1880s. He was an exciting and charismatic speedy outfielder for 8 seasons with the Chicago White Stockings, Pittsburgh Alleghenys, and the Philadelphia Phillies. He batted .248 for his career with just 12 homeruns but 246 stolen bases. Once he was converted to Christianity, he gave up the relatively high baseball salary of $3,000 a year to work at $83 a month in a YMCA preparing him for his career as a rabid evangelist.

Here's a nice video I found of an older Billy Sunday and his famous antics: