What a friggin' day of Baseball. As summer's solstice approaches, the advancing 2010 baseball season reached its apex again today. All sorts of colorful varieties of the summer game were displayed radiantly today, the first day of a three-day weekend. When the sun went down, an orange-tinted waning full moon oversaw our game's second perfect pitching outing of the year already. 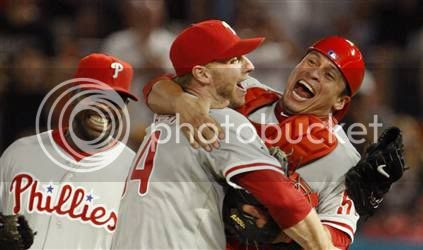 -Roy Halladay threw a perfect game tonight against the Marlins in Miami. It's already the 2nd perfect game pitched in the major leagues this season and third in the last two years although it's only the 20th ever, including two that happened in the 1800s. Joe Posnanski perfectly captured the uniqueness of what we've been witnessed. 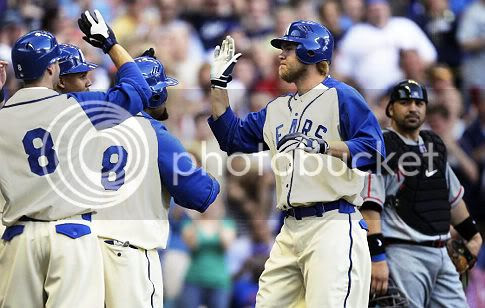 -The Mets and Brewers played an action-filled ballgame wearing Negro League throwback uniforms. The Mets were the New York Cubans from the 1930s and the Brewers were the Milwaukee Bears circa 1923. In stark contrast to Halladay's gem, both starting pitchers in this game were knocked out before the 4th inning as there was plenty of offense, 14 runs in all including two homers from Corey Hart with the Brewers beating the Mets 8-6. John Axford, sporting a classic handle-bar mustache, closed out the game for the Brewers.

-After seeing their starting pitcher take an A-Rod missile of a line drive off the side of his head (it hit his skull so hard that it bounced almost 300 feet away), the Cleveland Indians stormed back at Yankee Stadium to beat the Bronx Bombers 13-11 sending their fans home disappointed and unhappy.

-Gabe Gross made this ridiculous catch in the Tigers-A's game. Notice how he couldn't stop smiling afterward. This is a kid's game after all.

-After hitting a walk-off grandslam in the bottom of the 10th inning in Anaheim, Kendry Morales jumped on home plate so hard he broke his leg.

-In the only game that my TV let me watch, the Cubs' Carlos Silva, who was literally dumped on the Cubs after embarrassing himself for two years as a horrible waste of money in Seattle, baffled the Cardinals offense with 11 strikeouts in 7 scoreless innings. He's now 7-0 on the year. Salvation thy name is Carlos Silva.

And plenty of other fun stuff happened.

The Stanley Cup Finals also began today with a hard-hitting and exciting 6-5 game won by the Chicago Blackhawks. And the Lakers are going to the NBA Finals again to play the Celtics (again). It is a damn good time to be a sports fan.
Posted by PQ at 4:15 AM