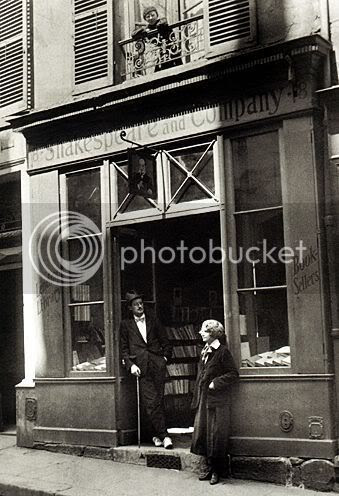 "If the world's dwindling independent bookstores have a patron saint...she is Sylvia Beach"

Quoted from a nice little article in Sunday's New York Times about Sylvia Beach who was the first publisher of James Joyce's Ulysses at a time when nobody would publish the great work of art because in 1921 it had been declared "obscene."

Originally born in Baltimore, Maryland, Miss Beach eventually moved to Paris where she established an English-language bookstore in 1919, Shakespeare and Company, that became a hang-out for many of the famous writers of the time whom she befriended including F. Scott Fitzgerald, Ernest Hemingway, Ezra Pound, and especially James Joyce. She met Joyce in the summer of 1920 and timidly approached him to ask "Is this the great James Joyce?" As Richard Ellman describes,


She expressed her admiration for his books, and he asked her what she did in Paris. When he heard the name of her bookstore, he smiled gently and wrote it down in a little notebook which he nearsightedly held close to his eyes. He promised to come see her, and in fact arrived at her shop the next day. He wore, she noticed, a dark blue serge suit, a black felt hat on the back of his head, and rather dirt tennis shoes, with a twirling cane contributing an incongruously dapper element to this costume.

When I first read that I laughed out loud. Joyce rocking dirty tennis shoes in 1920 reminds me of Larry David in Curb Your Enthusiasm. Maybe he's wearing tennis shoes in that photo above. When they met that day, Joyce told her of his financial troubles. For the past five years he'd been engaged in the process of completing Ulysses and trying to get it published and he wasn't earning any steady income  while trying to feed his wife and two children. Sylvia Beach would eventually offer to publish Joyce's great masterwork which was being rejected by the publishers Joyce sought because it had been declared "obscene" for its sexual language.

The stories of the stress they had to go through to publish Ulysses are very entertaining (similar to those which I described regarding Finnegans Wake not too long ago) as, while the typeset was being put together and proofs printed, Joyce would cover the proof pages with notes and additions to the text. These handwritten notes were almost indecipherable and typists had to be hired to put it all together. One of these typists, hired to type up the "Circe" episode---the longest and dirtiest of the whole book---was getting along fine until her husband glanced at the manuscript and threw it into the fire in a fit of rage. The only other person with a copy of those manuscripts was a lawyer in New York named John Quinn who had been collecting and purchasing manuscript portions of Ulysses directly from Joyce. Quinn would not give up the manuscripts but then, after correspondence from Beach and Joyce, he gave in and had the pages photographed and the draft for the episode was completed.

Beach's efforts to help Joyce (both professionally and--often lending him money--financially) were vital to the publication of Ulysses and she holds an important spot in history because of that but it was a draining and stressful enterprise. The resilient woman would later write in her memoir, "It seemed natural to me that the efforts and sacrifices on my part should be proportionate to the greatness of the work I was publishing."
Posted by PQ at 8:51 PM