I've been absent for a little while as the baseball games consumed me but I'm back now for a quick look at the final regular season NHL standings and how things will shake up in what should be an exciting Stanley Cup playoffs. 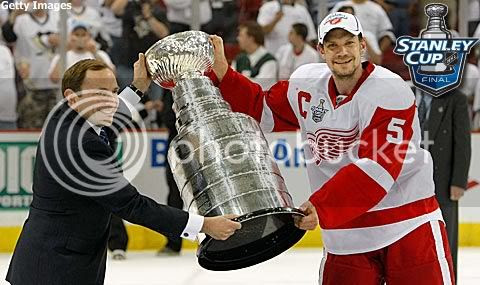 Back in January, in a preview of the NHL season's second half, I examined each conference and all everyone's chances of making the playoffs. In the Eastern Conference, I totally botched the Ottawa Senators and stated that they wouldn't be going anywhere but down for the remainder of the season. Instead, they went up a bit from 6th place to 5th. I also chose my ol' hometown team, the Rangers, to finish ahead of the Canadiens and get in the playoffs with the final spot. That didn't happen. In the West, I was wrong in picking the Predators to fade from the race but they'll surely be knocked out easily in the first round.

Here are my picks for each match-up in the first round:

Eastern Conference
#1 Capitals vs #8 Canadiens
Caps but it won't be as easy as people think.

#2 Devils vs #7 Flyers
Should be a gritty, closely-matched series. If the Flyers get some solid work in goal they have a strong chance for an upset. Then again, Ilya Kovalchuk has an actual chance to win a championship and might just take over the whole show. My bet is on the Flyers.

#4 Penguins vs #5 Senators
I showed the Sens no respect in my second-half season preview and I show them no respect here. Pens will dispose of them quickly.

Western Conference
#1 Sharks vs #8 Avalanche
The biggest question going into the playoffs is if the Sharks can finally succeed in the playoffs. Well, they'll certainly make it past the first round this time.

#2 Blackhawks vs #7 Predators
Nashville has a very tough defensive corps but this team doesn't stand a chance against the vaunted Blackhawks.

#3 Canucks vs #6 Kings
I saw the Canucks play in person the other night and really was not that impressed (they beat the Ducks in a shootout). I must note that superstar goaltender Roberto Luongo was on the bench, though. The Kings are the team I most often watch on TV and I've grown to really like them. I think this will be a tough series, very likely to be decided in 7 games. The Canucks are a popular pick to win the Cup and I even mentioned them as a Cup sleeper pick back in January, but I'm going to make a bold prediction and take the Kings.

#4 Coyotes vs #5 Red Wings
Another great looking series. The Wings are absolutely on fire and the Coyotes are out to show that they deserve respect as a contender. Goalie Ilya Bryzgalov is capable of taking over this series by himself and I think he'll be a major factor for the Coyotes before they bow to the charging Red Wings. I actually like the Red Wings to make it as far as the Conference Finals and maybe even the championship...

My Stanley Cup pick is a bit of a cop-out perhaps but:
Red Wings over the Penguins

Here's the TV schedule for the first round.
Posted by PQ at 7:07 PM