My Sunday afternoon was spent soaking up the bright spring sun sitting with my ladyfriend and 21,000 other people in Petco Park watching the Padres finish off a sweep of their weekend series with the rival Diamondbacks. I say "rival" mainly because there's a pretty large contingent of people from Arizona, "zonies" as they're called, in San Diego and it usually leads to a sense of rivalry (and post game gloating in the stadium exodus) amongst the game's attendees and the local downtown San Diego residents around the ballpark. Last year, following the ending of a Diamondbacks victory over the Padres which I'd attended at Petco along with my lady (the first game I brought her to), we were walking through the loud and crowded city streets to my car and saw a huge lit up sign from an apartment building window flashing "D'backs win!"

This was the first Sunday afternoon home game for the Padres and, since I had nothing else going on today, it seemed like a great way to initiate my (live) 2010 baseball experience. We parked for free on the corner of 10th and E Streets, only a four-block walk away from the stadium but hanging out in my car eating pregame veggie burgers delayed us a bit and we arrived at the end of the 1st inning. I decided to splurge a bit for my 1st game of the season and shelled out $58 bucks apiece for two great seats in the very first row of the 2nd level. The seats provided an absolutely perfect view of the diamond and we were uncovered out under the beaming sun. This was our view: 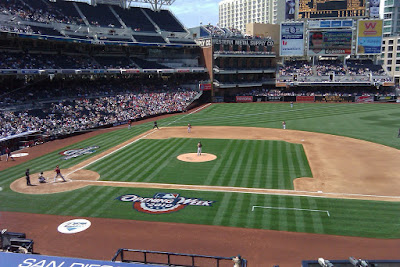 You can see the big "Opening Week" decorative sign painted on the grass and I'm pretty sure this is the first time I've ever been to an "Opening Week" baseball game, although I don't know if it's something all team's paint on their home grass. The Pads' special week had begun with an anomalous 17-2 demolishing of the visiting Atlanta Braves only to have the Braves deflate and defeat them by a combined 12-3 score over the next two games. Friday night the Diamondbacks came into town and pitcher Edwin Jackson carved through the San Diego lineup for 6 shutout innings before the home team rallied for 6 runs on the Arizona bullpen capped off by Chase Headley's walkoff three-run bomb that was the most exciting play of the young 2010 Padres season. They carried momentum and confidence into last night's 5-0 defeat of the D'backs (although they could only muster 2 runs off of a shaky Kris Benson) and so I assumed today would be a perfect game to watch in person; the home team going for a sweep on a sunny day game.

The game featured a very interesting pitching matchup, the Padres sending out crafty young lefthander Wade LeBlanc, a Triple-A callup who barely missed out on the 5th spot in the rotation to open the year and was stepping in for the injured veteran Chris Young. He was opposed by Arizona righty Ian Kennedy, a former Yankee prospect acquired in the winter's biggest trade. The two twenty-five year old hurlers didn't throw very hard and both relied on their changeups to generate lots of swings-and-misses. LeBlanc obviously had some nerves working against him to start off as he allowed a run on two hits and walk to start the game, but he settled down pretty nicely and kept the crimson-clad Arizona hitters whiffing at changeups to the tune of 7 strikeouts in 5 innings, with that first inning run the only one he allowed. Kennedy had a similar pitching line (5 IP, 7 Ks) but never seemed to be in any trouble and worked confidently, only allowing one extra base hit and generating lots of flailing swings with his changeup. For a while the Padre hitters couldn't make good contact against him and just kept tipping foul balls, the only hard-struck ball a double by Everth Cabrera when Kennedy was almost at 100 pitches. He surrendered only 2 hits and didn't allow a run. Interestingly, both pitchers hit a single against one another.

When the young soft-tossing starters departed and the firearmed relievers took over, the feeling of the game changed sharply and you could hear it. The loud crack of the bat, heard rarely throughout the first five innings, resonated on Edward Mujica's first pitch of the sixth, a fastball that Mark Reynolds knocked into the second deck in left field putting his team ahead 2-0. Mujica settled down and didn't allow another baserunner over his two innings but the D'backs did make four loud linedrive outs. The Padres' first look at a reliever (former Friar farmhand Leo Rosales) saw them put two runners aboard with no outs but a foul popout and a nifty double play from Mark Reynolds at third quieted the rally.

It would soon become apparent that Diamondbacks manager A.J. Hinch had made a mistake in only bringing Rosales in to pitch one inning. The pitcher's spot was due up next in the Arizona order when Hinch brought Rosales into the game and it seemed like a perfect opportunity for a double switch but Hinch instead opted to restrict Rosales to one inning and replace him with a pinch hitter in the 7th. The pinch hitter, Gerardo Parra, flailed at a fastball far out of the strike zone and, when it was the Padres' turn to hit in the bottom of the seventh, reliever Aaron Heilman entered the game for Parra. I knew this would be a big boon to the Padres and noted to my girlfriend how Heilman had often sucked with the Mets and practically played his way out of town. The Padre rally got started right away with Scott Hairston smacking a homerun to left field. Heilman managed to get two more outs but the Pads showed the same two-out resilience they'd shown in the previous two games. Everth Cabrera singled and stole second, setting the stage for the other Hairston brother, acrobatic utility infielder Jerry, Jr., who hit a double over the leftfielder's head to tie the game at 2-2. That was it for Aaron Heilman. I kind of felt bad for him as he skulked slowly off the field after being removed from the game. I thought of his past pleads to the morons running the Mets to let him be a starter instead of a reliever that always went unheeded.

The next Arizona pitcher, Juan Gutierrez, entered the game facing Adrian Gonzalez with the go-ahead run at second and didn't offer A-Gon anything to hit, eventually just giving up and issuing a free pass after missing the first three pitches. To the plate stepped the burgeoning star Chase Headley and he continued his breakout 2010 season with a smash into the left centerfield gap that plated two runs and then himself as he came across to score on what was ruled a triple but the play had the excitement of an inside-the-park homerun. The crowd was loud and joyful and the game was all but over. San Diego closer Heath Bell allowed a run before finishing off an exciting 5-3 win and the series sweep.

Further Notes:
- In the bottom of the 8th, manager Hinch tried to show everyone that he could, in fact, execute a double switch but it was too late and his efforts seemed like overmanaging. His decision was to shuffle up 4 positions in a lineup card sleight of hand that left the scoreboard operators puzzled and picking the wrong card. Going into the gory details, he brought in pitcher Blaine Boyer and inserted him into the leadoff spot where leftfielder Conor Jackson was, then brought in Stephen Drew to play shortstop and hit in the pitcher's spot, moved starting shortstop Tony Abreu to third, thirdbaseman Mark Reynolds to first, and firstbaseman Rusty Ryal to left field. This merry-go-round didn't show up on the scoreboard for a while after it was announced, then showed up incorrectly. I entered it correctly in my (free) scorecard, though so ha!

- I do think it's a smart move on Hinch's part to bat Conor Jackson leadoff and I'm glad to see such a break from tradition as Jackson is a big guy who doesn't physically profile as a "typical" leadoff hitter but always has a high on-base percentage. Jackson looked impressive today, although he had only one hit he smoked two line drives right at fielders.

- Neither starting pitcher recorded a win in the game and their combined career big league record sits at 5 wins, 6 losses. But they both showed the stuff of solid major league pitchers and both should stay in a big league rotation for years.

- I described Jerry Hairston, Jr. as "acrobatic" above because this weekend he made some spectacular plays in the field and, taking note of him during the between-inning infield warm-ups, he handles the ball with the finesse of a Harlem Globetrotter or old barnstorming Gashouse Gang infielder or something. It's really fun to watch.

- I don't think I've seen this comparison made before, but Nick Hundley reminds me of A's catcher Kurt Suzuki but doesn't get anywhere near as much praise. They're very similar hitters (.238/.313/.406 for Hundley last year in the worst hitter's park versus .274/.313/.421 for Suzuki who also plays in a big park) and have reputations for being good defensive catchers. They're both 26 years old (Hundley is almost exactly one month older), but Suzuki has been doing his thing for a few years now whereas Hundley is in second full season. As a fan of both teams, I'm pretty happy with who we've got behind the plate for the next few years.

- In the first paragraph I mentioned the first game I brought my girlfriend to. Justin Upton put on a show that night, basically winning the game singlehandedly. He launched two homeruns and was responsible for all three Arizona runs in a 3-1 while also gunning down a runner at the plate. In today's game he was quiet: 0 for 3 with a walk.

I'll be back there on Wednesday afternoon to see Padres-Giants.
Posted by PQ at 11:11 PM