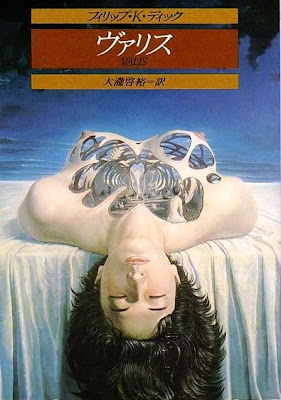 "Each of us has within us a secretly potent pantheon. The unconscious sends all sorts of vapors, odd beings, deluding images up into the mind–whether in dream, broad daylight, or insanity; for the human kingdom, beneath the floor of the comparatively neat little dwelling that we call our consciousness, goes down into unexpected Aladdin caves. There not only jewels but also dangerous jinn abide: the inconvenient or resisted psychological powers that we have not thought or dared to integrate into our lives. And they may remain unsuspected, or, on the other hand, some chance word, the smell of a landscape, the taste of a cup of tea, or the glance of an eye may touch a magic spring, and then dangerous messengers begin to appear in the brain. These are dangerous because they threaten the fabric of the security into which we have built ourselves and our family. But they are fiendishly fascinating too, for they carry keys that open the whole realm of the desired and feared adventure of the discovery of the self. Destruction of the world that we have built and in which we live, and of ourselves within it; but then a wonderful reconstruction, of the bolder, cleaner, more spacious, and fully human life–that is the lure, the promise and the terror, of these disturbing night visitations from the mythological realm that we carry within.”
- Joseph Campbell, The Hero with a Thousand Faces


The weather has already gotten pretty warm in Austin, staying up in the mid-70s even into the middle of the night. As I write this, my A/C is not working properly and it's uncomfortably warm and humid in my living space while I watch the Mets play the Colorado Rockies in Denver where a mid-30s frigid chill dominates the scene. The announcers, players, and a sparse collection of fans all tense up in the icy wind as I watch sweating and overheated in the heart of Texas.

I'm hoping some of that cold Rocky Mountain moisture can make its way down to steaming hot Austin (where an unrelated Colorado River runs through) to create some rain for this parched territory. The interaction of hot and cold, high and low pressures wrestling with each other always leads to meteorological frictions and stormy weather.

The duality underlying our existence, the theme of two opposite poles, ying-yang, subjective-objective, the one and the many, the right and left lobes of the brain, etc. has spun around in my thoughts and studies lately. Daytime consciousness versus nighttime unconsciousness. Ulysses vs. Finnegans Wake. The planet earth which is at all times half-illuminated in sunlight and half asleep in the dark cosmic abyss. 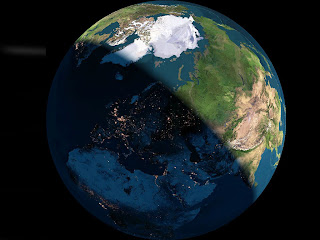 This interrelationship between the two opposing elements, what Joyce calls "the coincidance of their contraries" (Finnegans Wake, p. 49) comes as a further elaboration of the ideas I touched upon in my recent post "On the Lofty Potential of the Human Brain" about autistic savants who are able to tap into the right half of the brain.

Over at the always interesting Groupname for Grapejuice blog, the intrepid explorer of ideas know as Znore has been discussing legendary science fiction author Philip K. Dick and his experiences with a mysterious entity that began communicating vast stores of information to him over a period of years. Making its omniscient presence felt in a variety of ways, PKD called it VALIS for Vast Active Living Intelligence System and wrote about it in a novel of the same name. He also spent many late nights hand-scribbling thousands of pages of notes about the experience during these years, recently published for the first time under the title Exegesis.

The PKD discussion led me to a fascinating 1979 audio interview with the science fiction master in which he discusses the VALIS experience, one of his speculations being that it could've actually been a result of the two halves of his brain communicating with each other. Around the same period, Robert Anton Wilson experienced similar messages and communications which he wrote about in Cosmic Trigger Vol. 1. The well-known interpretation of RAW's experience is that he was receiving messages from the Sirius star system (PKD also, interestingly enough, offers this interpretation for VALIS) but in discussing other plausible hypotheses for the phenomenon, he admits it could've actually been the right brain talking to the left.

Naturally, there is not much balance between the two brain spheres in the average human being these days. The logical left brain tends to dominate, narrowing our experience of consciousness down to the most efficient and pertinent issues of daily survival. The mysterious right brain is where all the creativity lies, the seemingly infinite stream of novelty, a direct link to the wellspring of energy and information in the universe, yet that side of the brain lies largely dormant in the majority of the human species. The left brain represses the right brain just as, in Finnegans Wake, brother Shaun tries to repress his shameful twin Shem.

Speaking of Shaun and Shem, the VALIS stuff made me consider possible analogues in Finnegans Wake and I immediately thought of one of my favorite chapters, known as the "Inquest of Yawn". In Book III, Ch. 3 (starting on pg. 474) we find Shaun in the form of Yawn, a gigantic body lying asleep on a hill where he is approached "from all their cardinal parts" by four old men (representing the four points on a compass, four bed posts, Matthew-Mark-Luke-John, among other things), they are inquisitors trying to survey human history through a unique, Wakean psychoarcheological interrogation. The four frightfully approach the snoozing giant who's about as large as the cosmos itself with "his electrolatiginous twisted entrails belt" and "asteroid knuckles" and they begin to enact a sort of séance, summoning through Yawn's body the spirits of all the characters of the book as well as the entirety of history.


"We appear to be memory coils (DNA carriers capable of experience) in a computer-like thinking system which, although we have correctly recorded and stored thousands of years of experiential information, and each of us possesses somewhat different deposits from all the other life forms, there is a malfunction - a failure - of memory retrieval."

While they are "seeking spoor through the deep timefield" (FW p. 475) in "their sworn starchamber quiry on him" the four inquisitors of Yawn are attempting to retrieve these stored memories and experiences of existence, studying "the map of the souls' groupography" (p. 476).

The Yawn séance seems to be done electronically as the chapter crackles with radiowaves and the spirit voices of summoned characters are sometimes interrupted by phone calls or advertisements. Like the rest of the Wake, the chapter is complex, profound, and always funny while the crew embarks into "Challenger's Deep." Plumbing the depths of Yawn's psyche (or DNA memory), tapping into what Joyce called in Ulysses the "strandentwining cable of allflesh," the inquisitors yell "Clear the line, priority call!" trying to get a good signal. "Moisten your lips for a lightning strike and begin again. Mind the flickers and dimmers! Better?" (p. 501).

"As he lay in all dimensions" (p. 498), the gigantic Yawn blares "I have something inside of me talking to myself" (p. 522) while the four interrogators call forth the talking spirits of one character after another, each of them responding to questions and telling their stories.

From the PKD interview linked to earlier: “It invaded my mind and assumed control of my motor centers,” he said. “It set about healing me physically and my 4-year-old boy, who had an undiagnosed life-threatening birth defect that no one had been aware of. It had memories dating back over 2,000 years. . . . There wasn’t anything that it didn’t seem to know.” In a perfectly Wakean manner, the entity even spoke to Dick sometimes in ancient, dead languages.

In the aforementioned discussion of VALIS over at Groupname for Grapejuice, the author Znore references another cool blog Wrong Way Wizard where the following description of VALIS is given:


VALIS, by my logic, is an eternal magnetic loop which contains the entirety of history and all of its elements--the mythical; cosmological; superficially natural and architectural. It also houses the identity of a fixed number of personalities. Often, these personalities are referred to as souls.

Sounds very much like what Joyce called "the map of the souls' groupography" examined through Yawn. The souls summoned through him even converse with each other at times. 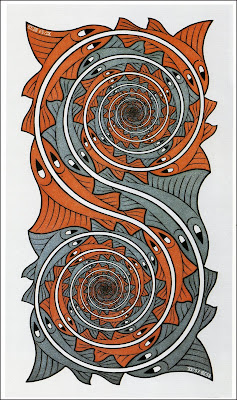 Whenever you flip through Finnegans Wake, you'll inevitably meet multitudes of puns playing on the theme of duality. Balancing or battling of pairs. The yin-yang twin brother duo of Shem and Shaun is representative of one of the underlying laws of the universe as we know it. As a Latin (translated) prayer toward the center of the book has it, "everything recognizes itself through something opposite and the stream is embraced by rival banks" (p. 287).

While I was going through the Yawn chapter, I paused at a line on p. 482: "The prouts who will invent a writing there ultimately is the poeta, still more learned, who discovered the raiding there originally." The proud creators/inventors of letters, alphabets, language, printing as opposed to the poets, the shamans, who'd been tuned into hearing the "raiding" or reading or language long before the refined technology of writing was invented (notice via the usage of "ultimately" and "originally" the sentence also twists back to itself like a Mobius strip). This goes back to the ear/eye opposition that features throughout the book (think text vs. oral), where Shem the Penman/Poet represents the ear and Shaun the Postman/Letter-carrier represents the eye, as the next line says "What can't be coded can be decorded if an ear aye seize what no eye ere grieved for."

A little later within the Yawn chapter I stumbled on plenty of other Shem/Shaun tussles and an important reference to Giordano Bruno on pages 488-489. The idea of coincidentia oppositorum (coincidence of opposites) that the Wake makes such abundant usage of comes from the Italian philosopher Bruno who Joyce so admired. Bruno the Nolan reappears all throughout the book in a multitude of forms, always representing the "coincidance of their contraries."

As I was reading all of this it all harmoniously resonated with thoughts I'd been having earlier that day about the Shadow of one's psyche. I try to keep Rob Brezsny's brilliant book Pronoia opened on a table surface at all times so I can peek at it and thumb through randomly. Earlier that day I had the book opened to the section called "Shadow School" which contains a few chapters about dealing with and assimilating the shadow of your personality, the repressed and hidden energies that end up being unconsciously projected outward, reflecting back at you and making you cringe in disgust, not realizing the things you hate and fear most are actually part of yourself.

Shaun tries to repress and shun twin brother Shem, the shadow he's "asamed of" but which is actually "asamed of me," the same as him or of him because the two are in fact parts of one united entity: "I call you my halfbrother."

Later that night, after all that reading, notetaking, and pondering, I laid in bed reading Robert Anton Wilson's novel Masks of the Illuminati. You can imagine how astounded I was when the page I was reading had this line spoken by none other than James Joyce himself:


"All day a phrase from Dante has been running through my head: ed era duo in uno, ed uno in duo. 'They were two in one, and one in two.'"

And then Joyce's "twin" in the novel, Albert Einstein responds with a similar line from Faust that he'd been thinking about the last couple days: