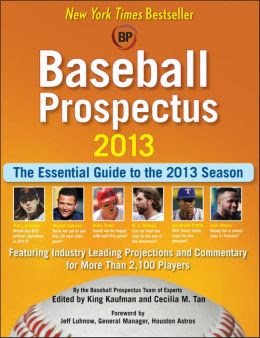 For the last ten years, each February has brought a new edition of the Baseball Prospectus annual book to my doorstep. Covering every team and every player with essays, statistics, and commentaries, it's always a treasured new arrival which I somehow manage to devour entirely, all 500+ pages of it, within a few weeks.

While it has the physical appearance of a college accounting textbook, the BP annuals have always been known to be densely stuffed with great writing. The statistics serve as the structural spine of the book but the essays and player commentaries are always the highlight, making it so addictive to read for a baseball nut.

This year's edition made some unwelcome changes to the formula, though, and as a big-time baseball obsessive and Prospectus geek, it's a major disappointment. The BP venture has seen lots of turnover in its writerly ranks over the last 5 or 6 years with the style and content they produce gradually evolving away from what made them so successful in the first place.

The biggest change is in the head editors of the book. After Steven Goldman (one of my favorite baseball scribes) had been running the show for a long time, this year it was covered by King Kaufman of the much-maligned Bleacher Report website and one Cecilia M. Tan. These two can be commended for mitigating the annual book's most consistent problem, its nagging prevalence of typos, but on the other hand they flat-out ruined the book's greatest appeal, the team essays.

Every other edition of Baseball Prospectus, a book that's appeared every year since 1996, has featured unique essays for each team, always written in a provocative, witty style and approaching each team from a creative angle depending on their organizational philosophy and status. Reading these essays always gave me the feeling of awe, of realizing how hard it would be to write like that. Even though we're talking about a book of baseball stats and team previews, these essays were good literature.

The percentage of the book's essays that are well-written and creatively constructed has gradually dwindled over the years and now they're completely gone. They decided to scrap the pure essay style in favor of a formulaic, dry set of three sections covering last season, this season, and the farm system for each organization. While the old essays would sometimes be as long as three or four pages, now they're all one-and-a-half pages. They're also written in a flat style that fails to differentiate the material from any other of the dozens of other sources providing team previews (this blog included). For the first time ever, the writing in BP feels like something I could easily do myself.

This unfortunate deterioration is due to the well-known phenomenon of a formerly "underground" entity becoming mainstream. Baseball Prospectus is now read by pretty much every front office executive in baseball, the writers are well aware of this and are now much more reticent with their customary biting criticism or snark. With BP alums Nate Silver and Kevin Goldstein attracting mass media attention the last couple years (Silver for his analytics-based political predictions and Goldstein for being hired to run the Houston Astros scouting department), the book has inevitably attracted more new readers than ever and the editors have responded by dumbing down the material significantly.

This review is basically just to get all that off my chest. It's still a great book, just not nearly up to its old standards. As usual, I ate it all up quickly and even though I've read just about every word, the book now transforms into a perfect reference guide to thumb through when watching baseball games.

The growth and expansion of Prospectus has brought about similar entities for the other major sports and its worth pointing out that each of these other conglomerates (known as Hockey Prospectus, Basketball Prospectus, and Football Outsiders) publish similar annual books covering every fact you need to know and none of them have quite reached the mainstream levels of their baseball mothership. I'm especially a huge fan of the Basketball Prospectus books. Somehow, just two writers (Kevin Pelton and Bradford Doolittle) manage to craft that entire text, writing entertaining and informative essays for every NBA team and mini essays for each player. Among the many issues I have with the baseball version is their ridiculously large (and still growing) stable of authors for a book that used to be written by about half-a-dozen scribes. This year's book shows 27 authors while just 5 years ago there were half that many.

The Baseball Prospectus team took a major gamble in drastically changing their product this year and they've surely received truckloads of criticism and complaints from their most loyal readers for it. You'd have to think their analytical minds are sharp enough to realize they need to achieve a better balance between satisfying their increasingly disappointed core customers and reaching a wider audience. With no other such print publications on the market yet, I'll continue to purchase the annual text until and unless their mainstream-moving momentum somehow starts spitting out the exact same inane junk ideas you hear on TV broadcasts.
Posted by PQ at 5:53 PM